Not usually considered as a paving material, shredded bark can be used to form paths where a very informal look is required. Other applications are severely restricted as bark can only provide a surface dressing, not any form of structural load-bearing capability.

The main uses for shredded bark and other wood mulches are the garden, as a mulch or 'rustic' covering for meandering pathways, and also as a so-called safer surface for children's play areas.

There are several different types and grades of bark, and it can be worth shopping around to find the most suitable bark for a particular project. Factors that ought to be taken into consideration include:

Very simple to do. Decide where you want the path to run, and mark out with sand lines if required. Any surface vegetation should be scutched off to a depth of 35-50mm and disposed. Any slutchy or muddy patches should be excavated and backfilled with dry material such as crushed stone or sandy sub-soil. The bark can be laid directly onto the prepared sub-grade, ideally 50-70mm thick and trampled in to the surface soil. Depending on moisture content of the bark, this should give a coverage of around 20 m² per tonne.

For private play areas, such as in a family garden, it's usually recommended that the "loose-fill" be at least 300mm thick, and retained with an edging. Areas beneath swings and at the foot of slides are prone to having loose-fill kicked away, reducing effective cover, and requiring regular maintenance. Commercial or Local Authority Play Areas will typically need to comply with the relevent standards, and bark may not be acceptable as a surfacing.

No edging restraint is required for a simple path, but the addition of such an edging can 'tidy-up' its appearance, giving a more formal look, and keeping the bark from straying too far. Bricks, lumps of stone, timber gravel boards or wooden poles normally used as stakes all make good edgings.

Permeable geo-membranes, also known as landscape fabrics , may be used beneath the bark to deter weed growth through the path, but the bark then has a tendency to be scuffed off the membrane, leaving it exposed and unsightly. These landscape fabrics often cost as much as, if not more, per unit area, than the bark surface dressing. They certainly have their uses in large-scale or commercial schemes, but their benefit to a small garden path is less obvious.

Commercially, bark is sold by the cubic metre, and 1 cubic metre = 1,000 litres

The density of bark varies according to source wood and type/size of chippings, but is generally around 400-550Kg per m³

An alternative, and often cheaper alternative to bark is processed woodchips. These are manufactured from reclaimed or scrap timber, such as old pallets, and can be impregnated with dyes to create weird, and some would say wonderful, colour options.

Because it is a manufactured product, the particle size of woodchips can be tightly controlled and it is less prone to degradation than bark. Larger particle sizes mean the product is less likely to be blown away by wind, and there are playgrade options available. 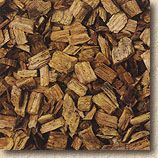