SBR for mortar and concrete

Reference is repeatedly made throughout the site to some mystical material usually referred to as SBR, but little more is said about it. Just what is it and why is its use in mortars and concretes suggested so often?

SBR is more formally known as Styrene Butadiene Rubber. It has an interesting chemistry, with different forms used for different purposes, but in the paving trade, it's most common use is to 'beef up' mortars and concretes. In our trade, it's most commonly used in its form as a thickish, gloopy white liquid, which echoes its roots as a synthetic latex. It is not 'pure' SBR, but a co-polymer which has been doctored and doped and diluted to give it the properties we need in the construction industry (elsewhere it is a major component of tyres and carpet backing amongst other things!)

It's usually sold in 5 litre containers, but regular users will purchase it in 25 litre or even 205 litre drums. Most suppliers simply label it as 'SBR', but there are several brands which prefer a fancy name in the belief that it will suggest super powers. It typically costs around £3 - £6 per litre, plus the dreaded VAT, so expect to pay £ 20-30 for a 5 litre container.

It's said to have a shelf life of 12 months, but I suspect that is the inherent conservatism of manufacturers looking to flog more of their product. Certainly, on smaller, non-critical jobs, SBR just past its second birthday has performed perfectly well.

Beyond that age, small rubbery-latexy clumps tend to form within the liquid, and it's probably wisest to invest in a new container.

When added to a standard mortar or concrete mix, SBR significantly enhances its adhesive strength: I usually inform enquirers that it helps mortar stick like the proverbial to a blanket!

But it does much more than this. It makes mixes much harder, more resistant to abrasion, and it can make them more or less waterproof.

Other reported benefits include:

Surely there must be some drawbacks, I hear you cry, otherwise we'd all be using it in everything we do, wouldn't we?

Well, the most important drawback, if that is the correct term, is that it significantly reduces the working life of a mortar or concrete. Whereas we might reasonably expect to have 30-40 minutes of working time with a standard mortar, when dosed with SBR, that is normally reduced to something more like 10-15 minutes. Consequently, a SBR-enhanced mortar or concrete needs using quickly. And it needs using cleanly !

As already mentioned, this stuff sticks, so any spills, snots or splashes not cleaned up more or less immediately, could be there for quite some time.

SBR is a versatile product and it would be practically impossible to provide a comprehensive list of all its potential uses in the paving trade, but here are some of those more commonly encountered:

How much to use:

There is no simple answer to this because each brand is diluted to a different degree. Some of the more expensive brand names will have very little dilution, but you can be sure that the cheaper 'bargain' packs will have been thinned to a much greater extent.

So the only guidance is to follow the guidance given on the container. This will typically suggest a rate of so many millilitres per kilogram of cement, rather than the more usual building trade measure of 'a splash per shovelful'.

For a typical (and readily available) good quality SBR product, the suggested dosage rate is 200ml per kg of cement (5 litres per 25kg bag). 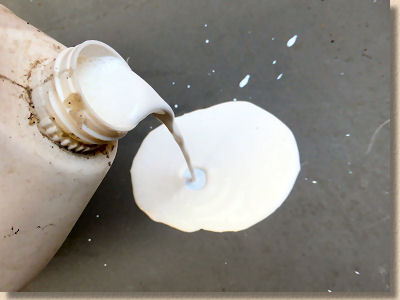 This will produce a very strong mortar (or concrete) and it may be considered that such a mortar is unnecessarily tough for the job in hand. F'rinstance, does a patio or light-use driveway really need a bedding mortar which sets like iron in next to no time? In such cases, it may be more reasonable to halve the suggested dosage. However, for pointing mixes, especially in high traffic areas, 200ml/kg can usually be justified.

This may have already been mentioned, but SBR mortar really, REALLY sticks. As a know-it-all 21 year old, I used it to point setts on a town centre job and, with the wisdom available only to the young and precocious, decided I didn't need to bother with gloves. A month later, I still had the last few bits clinging to my fingernails.

Manufacturers often claim that hardened SBR mortars can be removed using a thinner such as white spirit. Yeah! White spirit, a chisel and two weeks of your life!

While thinners such as White Spirit may just about expedite the eventual removal of unwanted SBR mortar (as long as it's relatively fresh) it's still a lot quicker to clean it up straightaway with a damp cloth and/or wash your mitts/trowels/mixer as soon as possible.

Never, ever, ever leave a SBR mortar or concrete in the drum of a mixer. Once it's mixed, empty it out, flush out the drum, then flush it out again.