Home / About Us / News / Newsletter

Referring to it as a Newsletter is making it sound much grander than it actually is. In truth, it's a very now-and-again email which might also include updates on new product trials , photo/video opportunities, and the occasional chance to try out new tools and provide feedback to manufacturers and distributors.

The list was originally set-up for contractors only, but a significant number of DIYers and others who have an interest in the paving game have asked to be included, so the opportunity to sign-up has now been extended to everyone. 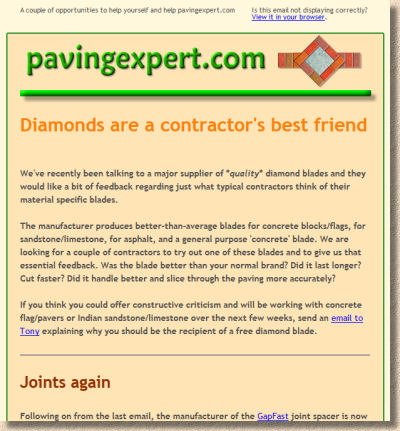 Note that Contractors will automatically be added to the National Contractor List , which is used to forward leads for work to suitably experienced craftsmen, while the "other parties" will simply be included on the mailing list.

The site has an official Privacy Policy , which could actually send an insomniac into a coma if it were to be read. The key point of all that legalese is that contact infomation and email addresses are NEVER passed on to anyone else. Ever. At all.