Well, that's the world saved for another 12 months, and we can all sleep easy in our beds, safe in the knowledge that there is no danger of glacial meltdown submerging Kirkcaldy, no risk of desertification in the West Pembrokeshire, nor any concern regarding hurricanes wreaking devastation in Southport, and it's all due to the lovely cuddle eco-friendly exhibitors that took over two ginormous caverns in London's Docklands this week, all in the name of moving towards a construction industry that is so green, it will need mowing at least twice a week.

The above paragraph actually has a lower "bollocks" count than the EcoBuild exhibition which over the years has metamorphosed from a well-intentioned germ of an idea in a reasonably convenient location to become a multi-headed hydra with tentacles sprawling across the half of East London not currently being Olympicified.

If I had one complaint, it would be that the whole thing has become too damned big. But I have more than one complaint; I have many. It's too dis-organised; it's become as bad as Interbuild was in its worst excesses; it's diluted the Eco-branding thing to a level that even Homeopaths would struggle to recognise. When there is, allegedly, such a thing as environmentally-friendly lead flashing, when so-called authentic Mongolian Yurts have a 5-Lever insurance-approved mortice lock on the genuine Green Oak Stable Door with Brass fittings, when 60,000+ people travel from all over the world to congest and convene in an air-conditioned tin shed on the banks of the Thames, then you know that the end of times is surely upon us.

What happened? Why did the genuinely innovative and invigorating event that was CityScape 'jump the shark'? Like a Red Giant star, it is in imminent danger of collapsing under its own mass.

It was almost impossible to find anything. Visitors were given an A0-sized map minutely annotated with 6 point text and the first hour was just one non-stop comedy of overburdened men and women struggling to find the right part of the map with both arms fully outstretched, and then trying to wrestle it back into its original, more-manageable A4 format. At CityScape, we had materially-related trades clustered together, so there was only one hall to find if your interest was hard-landscaping. This year, we have Brett and Aggregate Industries in one hall, but a hundred metres apart, while Marshalls and Tobermore are across the way, in the equally cavernous and over-stuffed South hall, and again there's a good hundred metres of worthy but totally irrelevant exhibitors separating them. Sprinkled amidst, like sixpences in a Christmas Pudding, were Aco and Polypipe , Vande Moortel , SteinTec , Lithofin and probably another dozen that I never managed to track down.

Fair play to Marshalls for having a damned attractive stand, though. Bedecked with the sublime La Linia paving in a three-colour, three-size mix, it was a real eye-catcher, even though some of the streetscape messages were less than obvious. At least you could surmise that Marshalls are in the hard-landscaping trade. Other manufacturers, such as Aggregate Industries, had not a single paving block, sett, flag, kerb, piece of gravel, lump of blacktop or trowelful of cement on the entire stand, and chose, instead, to make some statement about "Life" and how jolly good it can be. 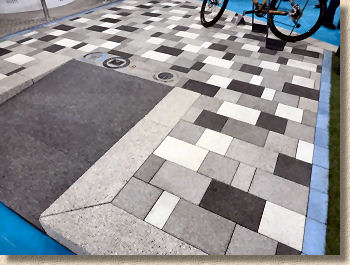 It's a worry that the hordes of marauding students which infest this particular exhibition, stuffing their man-bags and cotton totes with all sorts of unnecessary freebies, might not realise what it is that AI do for a living. At least with Marshalls, and definitely with Tobermore, there was no doubt they are in the paving game. It was there, on the stand, plain as the nose on your face. Brett, who elected to use big pictures of paving rather than actual product (on the grounds that it's less environmentally damaging to carry a few posters in the back of your car than a van load of concrete blocks and flags) chose the middle path: you could figure out that they manufactured paving if you observed the clues pinned to the walls, but they weren't going to make it too easy.

I know it's difficult to think of new ways to exhibit paving and many companies worry that we the public will be thinking, “Oh no! Another rectangle of flags, blocks and setts!”, but it's a proven winner. Even under artificial light (and credit to ExCel for their lighting being amongst the best I've ever endured at an exhibition) there's nowt like seeing the actual paving and having it under your feet, if only to initiate a conversation. I like it even more when some of the paving is elevated in some way, on a rack or a table, so that it's easier to run your mitts over it and get a fuller sense of its texture. Paving is an incredibly tactile medium and that often doesn't come across in pictures, slideshows or videos. Let the dog see the rabbit, as my Grandad used to say.

So, well done to those manufacturers and distributors that made the commitment and effort to represent that paving trade at what has become the largest and most important exhibition for the British construction industry, but a "must do better" to the event organisers. The whole thing is careering out of control and it desperately needs a firm hand to rein it in, get it to line up properly, and to show the world that, as a nation, we are pretty bloody good at this building game.