So the 11th International Conference for Concrete Block Paving ( ICCBP ) is over for another three years following the latest assembly in the German city of Dresden. The next port of call will be Seoul, South Korea in 2018.

These conferences are slightly awkward for someone who actually lays paving for a living. They are more or less completely divorced from the reality of in-situ pavement construction and, instead, focus almost exclusively on the theoretical and regulatory side of the industry, with a smattering of manufacturing thrown in just to spice it up.

We can't really complain: the organising committee ( SEPT ) have never so much as suggested that it is a conference for the manual end of the paving world. It's whole raison d'etre is to discuss developments in how paving is made, how it can be made better, what else it can do besides carrying people and vehicles, and how the administrators can better complicate the miserable lives of the downtrodden installers. Essentially, if you took a random sample of delegates and asked them to lay a block paver, they'd have, at best, a 50% chance of getting it the right way up.

What happened in Dresden, then, that might possibly be of interest to anyone beyond academia? Well, the conference centre itself is a fantastic building set on the banks of the River Elbe, looking out over glorious architecture and just 5 minutes' walk from the city centre, but for a modern building, it falls appallingly short on access for anyone with mobility issues. There is a HUGE flight of steps leading up to the main hall from the outside, from where the able-bodied descend two separate flights to reach the actual conference room.

For the less capable, there's a lift that takes you up to the floor above the one where all the action happens, and then you have to find a particularly well hidden second lift to take you down to the middle floor, This allows you into the mezzanine level of the conference chamber, but the only way down to the seating is via yet another flight of stairs. There is no disabled access (unless you want to go back outside and navigate your way across some of the lumpiest, bumpiest granite setts in the entire sett-paved city, then around the back of the building, and bang on the doors in the hope that someone will let you in) so the only viable option was to nick a chair from the main hall and set up a perch on the balcony, looking down on the proceedings below.

You can see and hear everything, but you can't participate in the questions without throwing yourself down the stairs. Not ideal, and the conference venue organisers should have realised this in advance.

The papers presented over three sometimes trying days were the usual mix of the bafflingly esoteric, the phenomenally fascinating, the bleeding obvious, and the utterly shameless plugs for particular products, some of which have been exactly the same promotional presentation for over a decade.

I'm not an academic, so the complex Three Dimensional Finite Element Analyses of a rutted pavement which prove that the pavement in question is, indeed, rutted, but don't show it quite a clearly as does the photograph used in the paper's introduction, goes completely over my head. At the other end of the scale were several discussions looking at how and why permeable block pavements clog, and what can be done about it, which seems to be a major reason for its summary dismissal by far too many specifiers.

Completely absorbing papers from Anne Beeldens (Belgium), Per Moller-Pedersen (Norway) and exiled Brit Simon Beecham (Australia) indicated the way forward in selling the concept is by spreading the information about what else permeable paving (CBPP in Europe and PICP in North America) can provide, and all at no additional construction cost! The paper on the reliability of clogging results from lab tests was, itself, completely impermeable thanks to the highly relaxed and informal delivery of its Australian author – say no more!

And then, from the sublime to the ridiculous with proof, as if it was ever needed, that jointing sand will trickle down into the bedding layer! There's even a speeded-up video to show it happening, FFS! Have none of these brainiacs ever lifted a block or two and looked at what happened to the jointing and bedding? Those of us who actually build and repair pavements have known about this for decades!

And what about the non-shock revelation that bound bases (macadam or concrete) are less prone to deformation than the usual, unbound close graded aggregate sub-bases?

If I had to pick out a small selection of papers that hold out the promise of a brighter future for conventional block paving, then those from Bernhard Kloppner (Germany) looking at the pollution-reducing photocatalytic potential of coated pavers, and the possibility of cooling urban heat islands (Helen Wilson based in Germany) by using special reflective pavers, and the highly stimulating paper from SF-Kooperation's head honcho, Stephan Steffen, on work they have been doing with noise-reducing pavers, were among the best.

So these, definitely, and the swathe of papers which show that permeable paving has genuinely exciting potential for cleaning surface run-off and water harvesting, two features that are all-too-often overlooked in these soggy, smoggy, groggy islands off the western edge of Europe, made the whole three days sort-of worthwhile….maybe…..probably.

However, what really matters at these conferences is the networking. The face-to-face meeting, greeting and tweeting between academics, regulators and manufacturers from all over the world. Except that some parts of the world, the bits we used to refer to as coming Third, are more or less completely absent, as are huge swathes of Europe, the Middle East and only the lightest peppering of North Americans. Loads of Germans, as you'd expect, plenty of Koreans, probably pre-advised about the venue for 2018, a decent show from the Japanese, and plenty of Chinese listed as attending but rarely seen at the event itself.

As for the British manufacturers, a reasonable turnout, with two Brettsters, three Marshallettes, a lone Tobermorian and very prominent sponsorship from sealant supplier Resiblock , who did what has to be acknowledged as a brilliant job promoting British know-how amid all that central European machinery. It would have been good to see a couple of other prominent British and or Irish manufacturers (the latter being shamefully absent) in what is a relatively local affair compared to, say, Shanghai or Buenos Aires . It's funny how many mid-ranking manufacturing managers managed to haul themselves 8,000 miles to the San Francisco conference , usually on a flight via Las Vegas, yet so few could cope with a mere 900 miles to Germany. 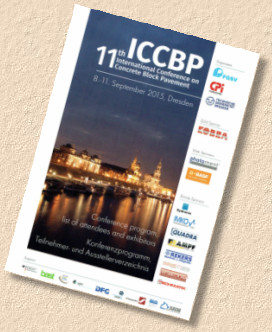 Of more concern, where are the British/Irish academics who will fill the enormous shoes of the likes of John Knapton, Allan Dowson and the late John Emery? Surely we should have a crop of 40-somethings ready to assume the mantles which will eventually be cast aside by our current crop of world-leading academics. We could be looking at the 2021 conference, assuming there is such a thing, being completely devoid of British/Irish contributors.

When the British Standard ( 7533 while it lasts) is so highly regarded throughout the world, can it be right that we have no up-and-coming thinkers and experimenters capable of picking up the baton carried for so long by Prof. Knapton and his contemporaries? That is a shameful thought and a damning indictment of both our education system and our industry.

Most delegates had buggered off home or back to the bar before the jolly out to the Lengenfeld production factory of mould manufacturer, Kobra , about 90 miles west of Dresden. A couple of hours on a coach in Friday afternoon traffic isn't anyone's idea of fun, but it has to be regarded as time well spent. I, for one, hadn't realised just how much work goes into producing the moulds which shape our pavers. Imagine taking an 80mm thick slab of high quality steel and then chopping out the shape of, say, 40 pavers to an incredible degree of accuracy. There's far more to it than you probably think.

No photies of the process, though, as Kobra are, understandably, a little protective about their precise techniques and equipment, so here's a lovely picture of the outside of the factory….enjoy!

Just a quick word about the overwhelmingly friendly and helpful attitude of everyone at Kobra. Nearly everyone speaks English, and with a degree of confidence that shames our own attitude to "foreign" languages. From the "Welcome" speech given by the company's MD to the explanation of complex case-hardening chemistry by an office junior, nothing fazed any of them, not even the perplexingly intricate, multi-layered and garbled questions from the Bulgarian in our group (who I reckon was probably a spy from a rival manufacturer!)

And so back to Dresden itself. It's a fascinating city, as I found out when I did the Tour Bus thing. I had imagined there would be scant, if any, reference to the “unpleasantness” of that night in February 1945 when the city was involuntarily re-landscaped, but it is still such a powerful presence in the city that the Dresdners talk of it in almost every sentence. There are still sites that are euphemistically described as “Brownfield” dotted right across the city centre, this as much due to Soviet era negligence as RAF ordnance.

For those of us of a certain age, seeing the Stasi HQ and the now-vacant Russian troop barracks is chilling, but then you look at that skyline, the view from the bridge over the Elbe which Dresden fan and part-time decorator, Canaletto, regarded as the Venice of northern Europe, and it's practically impossible to bring to mind any other city of such contrasts.

Attending these conferences is demanding. It's not particularly cheap (although you can save a small fortune by shunning the official hotel and opting for the one that costs two-thirds less and is only 250 metres away!) and it's mentally strenuous following what can be baffling notions in foreign languages, but it's so instructive to witness at first-hand how the brains side of the industry see the trade compared to those of us on the brawn side.

Will I make it to Seoul in three years' time? Not sure yet. It's a long way to go, and it will be even more expensive, but how many opportunities will there be to see South Korea (assuming those bell-ends to the north haven't blown it all to buggery and back by then) in one lifetime? I've 36 months or so to make up me mind!