It may seem that almost anything can be used to construct a sub-base. Some talk of Type 1 or MOT, some of hardcore, and others of 804 or planings. What's best and what should be avoided? How can this maze of choices and muddle of options possibly be navigated? This page aims to cut through the mist and make things a little clearer.

Sub-bases are the load-bearing layer of many pavements, the buried component that provides strength and resilience. They can also provide drainage, with the right choice of aggregate, but their key role is to provide that firm, stable and reliable foundation for the prettier parts of the pavement.

Most sub-bases are referred to as "unbound" or "flexible". This refers to the fact that there is no 'glue' or binder fastening together the loose aggregate. There's no cement, as there is in concrete, no bitumen or asphalt, as there is in a macadam, no resin, as there is with resin bound surfaces and resin mortars. It's loose, crushed aggregate, often stone, but increasingly includes the use of recycled materials.

Sub-bases using bound or 'rigid' materials, such as the aforementioned concrete and macadam or asphalt are used, particularly on larger civil and commercial projects, but this page looks exclusively at those unbound aggregates, particularly those classified within the DTp x range (803 to 807 in Ireland).

Where does this DTp summat or Eight-Oh-Number nonsense come from? What does it all mean?

The names come from the definitions provided in the Roads and Pavement Bible, Specification for Highway Works (SHW) now regularly updated and published by The Highways Agency but previously issued by the Department of Transport and, before that, the Ministry of Transport. This explains why its regular name is DTp1 or MOT1, but it’s also known, in some parts, as GSB – Granular Sub Base.

SHW sets down what’s required when constructing roads and the like and is split into sections covering topics such as earthworks (600), kerbs (1100) and, most relevant to this page of the website, Section 800 defines the aggregates used for unbound sub-bases.

Clause 803 of SHW sets the parameters for a Type 1 sub-base material (but, confusingly, it’s known as “804” or Type B in Ireland) as being that it must be a crushed material (so NOT a rounded gravel) to ensure proper interlock between the particles, and those particles should be 63mm* down to dust, but in specific proportions (known as a Grading Envelope), so that there will be a minimum volume of voids within the compacted material, which gives it the load-bearing capability that is required.

There is a slight difference between the Spec used in Britain and that used in Ireland that results in DTp1 not being quite the same as 804, but we are talking about hundredths of a millimetre. For anyone wanting to know more, a PowerPoint Training presentation comparing and contrasting is available on request for a small fee.

A variety of Primary (freshly quarried) and Secondary (recycled) aggregates can be used, but there are specific requirements about the quality of the aggregate, moisture content, and, most importantly, being non-susceptible to frost damage.

The specification requires the source of a Type 1 aggregate to be rushed rock, crushed slag or crushed concrete, and also permitted are selected recycled aggregates and asphalts, or what is termed ‘well-burnt non-plastic shale’. In certain applications, a crushed gravel is permitted, but there are further conditions imposed to ensure it is suitable.

There are aggregates supplied as Type 1 which are a mix or blend of Primary and Secondary materials, or a mix of two different secondary materials (Crushed concrete with crushed asphalt/blacktop being popular in SE England, largely due to the scarcity in that region and aggressive taxation of suitable primary aggregates)

The term ‘scalpings’ is a quarryman’s term for small stone offcuts, chippings or crushed material typically less than 75mm. This class is essentially 40mm to dust, so a similar range of particle sizes to Type 1 but no control over the grading envelope – it could be ‘lumps’ heavy, or it could be fines-heavy, but, in most cases, it’s a reasonable sort of mix of the sizing range. Having said that, there are often more fines within a loose classification such as this, so it will not have the same load-bearing performance as that of a true Type 1.

A more generous variation on the 40mm scalpings described above. “Crusher run”, sometimes mispronounced as “Crush and Run”, is another quarryman’s term for rock passed through a crusher and then run across screens to grade out anything bigger (in this case) 50mm. There are variations such as 100mm crusher run and 75mm crusher run, but these are regarded as too chunky for sub-base formation and are used as fill or as capping layers in larger civils works. The same caveats apply as given above for 40mm scalpings: lack of any proper grading; a tendency to higher levels of fines; and the consequent reduced load-bearing capability. 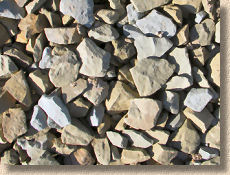 This aggregate is defined by Clause 804 of SHW, but, in Ireland, the relevant clause of SRW is "803" and it is sometimes refered to as a Type A aggregate.

There is a wider range of possible sources for a Type 2 than permitted for a compliant Type 1 aggregate  - Type 2 may also be sourced from natural sands and/or gravels.

When the grading envelopes for a Type 1 and a Type 2 are superimposed, it becomes apparent that the Type 2 envelope is more generous, less restrictive than is the Type 1 envelope. This is probably best seen on the right-hand side of the image, where the ‘green’ of the Type 2 allowance extends beyond that of the ‘red’ for Type 1….as highlighted below.

Type 3 – The Permeable One

This class is the unbound sub-base material typically specified when a very free-draining sub-base is required, and demand has grown with the increased use of permeable pavements, although some Concrete Block Permeable Paving (CBPP – also known as PICP in North America) use a build-up of selected Close Graded Aggregates as an alternative to DTp3.

It is also used for applications such as horse menages, sports fields, games pitches, tennis courts and anywhere that a very free draining but load-bearing sub-layer is required.

In very general terms, Type 3 is an open graded crushed aggregate roughly in the range 40mm to dust. Unlike the two most popular Close Graded Aggregates (CGAs), Type 3 is a low-fines aggregate and not no-fines, as some sources seem to believe. A brief perusal of the grading envelope shows that up 25% of the content of a Type 3 aggregate can be 1mm or smaller.

This aggregate is defined by Clause 806 of SHW and, back to the confusion, Clause 807 of SRW.

Whereas a true Type 3 is regarded as “Open Graded”, there is a close graded variant referred to as Class B which uses a different grading envelope. The main difference is a greater maximum percentage of finer material, which will typically improve load-bearing capability but slightly reduce permeability. It’s a minor trade-off: a teeny improvement in overall stability versus a weeny loss in drainability.

It seems the main reason for using a Class B rather than a Type 3 is down to availability of suitable source material. In certain parts of the nations, it’s not quite as easy to obtain ‘clean’, low fines starting aggregate and so the Class B option offers a near-as-dammit alternative.

The suitable source materials are the same as for a Type 3.

As the demand for permeable paving has grown, the range of aggregates deemed “best suited” to particular products has also expanded, and we now have a slightly confusing situation where, for example, one supplier of CBPP will specify a 20/5mm aggregate for the sub-base, another will dictate that it has to be a 40/20mm CGA and a third will require a lower sub-base of 63/10mm CGA overlain by a finer 20/5 CGA top layer…..and the blocks forming the paving layer are structurally almost identical!

Some of this variation, once again, arises from regional availability, and some arises from the design preferences of the individual engineers advising the various block manufacturers. The key guidance would seem to be to follow that provided by the manufacturer of the block (or other paving material) being used so that there is no risk of them denying any liability if it was to…..let’s say “disappoint”.

A review of permeable paving installations throughout Britain and Ireland suggests that the following gradings are the more popular:

More commonly known as ‘Road Planings’, the ubiquity of Asphalt Arisings has seen them increasingly used in all sorts of civil engineering projects, from dam construction to patio sub-bases. However, the requirements of what is now classed as a Type 4 aggregate are fairly strict, and not everything generated from a Road Planing or Cold Milling procedure will be suitable.

For example, planings coming from an asphalt layer may be suitable, provided the actual asphalt component generates less than 10% recovered bitumen, but the planings from a true bitmac (bitumen macadam) may not be suitable as a Type 4 but could still be passed off as either asphalt arisings or road planings.

Indeed, there is ample anecdotal evidence of any scrappy old planings being sold as Type 4, or Type 4-ish, and it seems to be a growing trend at the budget end of the driveway and patio sector in particular.

A true Type 4 meets the same grading requirements as a Type 1 aggregate, so those planings with the big chunks of road still intact, are definitely not a true Type 4.

Type 4 aggregate must contain at least 50% recycled asphalt (Class Ra) but can be bulked out with suitable crushed rock, crushed concrete, crushed slag or ‘well burnt non-plastic shale’, creating what is technically a blend of source materials. These additions to the asphalt arisings will, of course, need to meet the requirements of a Type 1 aggregate, and there is a less-than-obvious spectrum ranging from what is classed as a Type 1 recycled aggregate (which may contain asphalt arisings) to a Type 4 based on asphalt – the two share the same grading envelope….but where is the dividing line?

On a personal note, I’d only ever trust a Type 4 from an accredited and well-respected source. I’ve seen too many wagon loads of what is claimed to be a Type 4 with chunks of the M6 jutting out of it like the Matterhorn, suitable only for a farm track and most definitely not as a pavement sub-base, even if that pavement is a simple back garden patio.

Annoyingly, for a typical British driveway (which is slightly less than 50m²), the cost saving achievable by substituting a possibly inferior and dubious Type 4 for an accredited Type 1 is (at 2020 prices) around 60 to 120 pounds. Hardly seems worth it, does it?