Once upon a time, new products were given a showbiz-type launch at a massive trade show in a cavernous hall, with big tellies and robots and stuff, but in these pared down days, it's a lot more low-key, and so Marshalls unveil their 2010 collection via glossy 210x210mm booklet with an accompanying cd-rom. 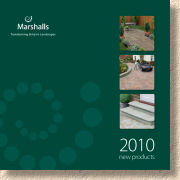 It's probably not the best time to swamp the market with snazzy new ideas. Some fancy-dan academic avoiding the real world and any risk of hard work by churning out research from a cosy university department somewhere, has claimed that, when the economy is depressed we seek comfort in familiar things. I think the thrust of the thesis was that when times are tough, we turn away from the exotic, such as Pan-Fried Hand-Reared Partridge with Wild Mushroom Stuffing and Saffron Polenta, and return to proper food like Hotpot with Red Cabbage.

In a similar vein, Marshalls have avoided overwhelming our collective palette with the outlandish, choosing instead to offer new flavours of familiar favourites.

The biggest news is a re-brand for the extensive range of imported natural stone. Known for the past decade as “Haworth Moor” (or “Haworthistan Moor” on this website), the company feels that they need to emphasise the stone's ethical origins, hence the deed poll to change the name to “FairStone” . It's stone, and it comes from a 'fair' source, that is, it's from ethically-approved quarries where they pay proper wages and provide a high-standard of H&S. The products themselves remain the same; it's just the name that's changed.

The only exception to the above is the addition of 'step kit'. Building good-looking steps using the fettled-edge flags has long been a problem, but this 3-piece kit offers the ideal solution, and it's aimed to retail at a bargain 35 quid. Two gorgeous corner pieces with a centre stone, all featuring a generous bull-nose edge, create a step that will be 1260-1300mm in length and 350mm deep, in three of the more popular colours. It would have been easy to knock-up a step kit using the standard 20-25mm flags, but this kit is a very generous 50mm thick, which gives a true sense of solidity and security. 35 quid? This has to be a big seller!

Over on the wet-cast side of things, the seemingly immortal Heritage range welcomes another incarnation, this time as “Weathered Yorkstone”, a sort of earthy brown that features a closer range of tones than the Calder Brown and a more realistic overall colouring. The buffs are browner and the browns are buff-ier, if that makes any sense, but the overall effect is quite pleasing and more realistic than any of the other colour options in the range. They've chosen to cover the flags with the “Active Shield” Teflon coating which has a disconcerting effect on any liquids coming into contact with the surface. As a protective coating, Active Shield is as good as anything I've seen before, but I'm less certain of how it weathers. I've a couple of flags on the roof of the high tech research facility at the bottom of the garden. They're currently buried beneath discarded oak leaves, so we'll see how they fare over a season or two in the real world.

Moving on to block paving, there are two new developments for the Drivesett Tegula range. Firstly, a new colour which could be thought of as the CBP version of the Heritage flagstone described above. It's been dubbed “Hazelnut” and it is a brown multi with quite subtle shade variations. Imagine the Tegula Traditional without the red tones and with a bit less charcoal. It's definitely brown, and while it's hard to judge from the ¼m² sample board I've seen, the publicity photos suggest a natural look that would be well suited to northern stone-built properties. 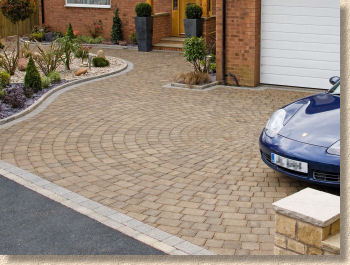 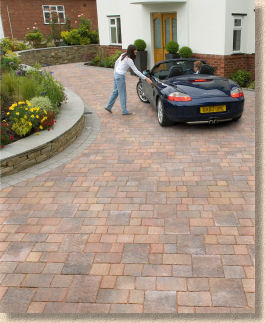 Secondly, a mere decade and a half (or more!) since I used them as part of the commercial Tegula range, a jumper block comes to Drivesett. Spanning two courses, the new jumper blocks weigh-in at a hefty 320x240mm (that should be somewhere around 9Kg) but they enable a real break from the over-familiar coursed layout normally used with Drivesett. They'll be available in the now four Drivesett colours and should retail at the same rate per m² as standard blocks.

I can see these being used for single-sized layouts. Larger blocks are very popular in Europe and North America at the moment, and it's a certainty that someone, somewhere will use the new size to create a chunky-looking herringbone layout. This new addition is just the shot-in-the-arm Drivesett needed to keep the brand fresh.

The Vintage flavour of Driveline blocks sees a new colour option, to be known as Bracken. Again, I'm judging from the sample boards shown to me at Marshalls Towers earlier this week and a few publicity photos, and it seems to be an intermediate between the gorgeous Burnt Ochre and the new Hazelnut/Weathered Yorkstone colouring. This product is edging closer and closer to the look of those reclaimed clay pavers from Holland that find their way into the country every now and again, and it was a suggested that a still-in-development reddish-brown colour will further strengthen that similarity. 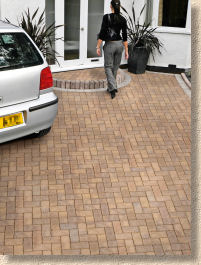 Finally, Marshallite Walling : remember that? There was a time, twenty years ago or so, that Marshallite walling was *the* choice for garden walls in northern England, but over the past decade, it seemed to be heading the way of Screen Blocks and Morris Minors. However, the “New and Improved” version, available in Buff and Ash Multi, features a much-improved concrete mix that produces a more naturalistic texture and a far more realistic colouring, with less of the coarse aggregate visible.

As with the new Teflon-coated Heritage flagstones, the true test of this will come with the weathering. If we get a subtle atmospheric discolouration and a touch of algal greenery, then it could look uncannily similar to natural stone, but if the weathering serves to expose more of the coarse aggregate, we could simply be right back where we started from.

That's it for new products. The 2010 brochure will be out in January and the new-ish website has been rendered slightly less cumbersome (a T1 connection is no longer mandatory), and there is to be a “Paving Planner” which is the latest attempt to use software to develop random layouts for flagged patios and driveway. As someone who has been searching for this Grail since my first ZX81, this could be the closest yet, but it still relies on “manual accommodation works” to minimise cut-flag wastage and there's no indication of how it copes with pre-determined quantities, such as those imposed when buying 'Project Packs'. I still reckon my bespoke layout plans are superior: accurately scaled, in-board cutting compliant, available at any scale desired, and guaranteed unique to each and every project. However, for a quick calculation and approximation, the Marshalls' Paving Planner is not a bad effort.