Tobermore Concrete Products hosted their first Contractor's Evening at the new Paving Centre in Leyland on Thursday June 8th. In previous years, the highly-regarded Contractor's Evenings have been staged at the company HQ in Northern Ireland, but with the opening of the Leyland Paving Centre earlier this spring, the company is now able to host a "mainland" event for the ever-growing band of contractors based in England, Wales and Scotland. It also allows them to invite a larger number of contractors, and this inaugural event involved a guest list of well over 100 of the more select contractors that have used, or are keen to use, the Tobermore range of products. 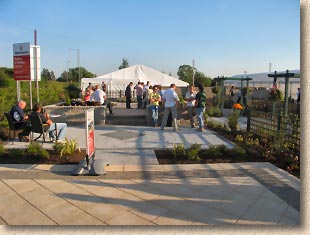 For many of them, this was their first chance to see the Paving Centre itself at first hand, and without exception, it was a very positive response, not just for the products that have been used, but also for the way the centre has been laid out, and the quality of the workmanship. A couple of the display panels have been changed since my first visit back in April; two panel of what had been the Tobermore Tegula paving have been lifted and replaced with the new, 3-size Roma blocks, which are a very welcome addition to the Tobermore menu, and well worth a look, as they offer something a little bit different from the now all-too-familiar tumbled block type of product.

Roma is a “3-sizes-in-one-pack” pack, which brings up all the old questions regarding laying ratio, but the recommended pattern is actually very attractive and I can't see any real reason why anyone would want to change it. Of course, the ability to have, say, and edge course of the larger size would be useful, but maybe that will come if the product takes off as it should. The three sizes are 120x120, 120x180, and a chunky 180x240mm. Two colour blends; a summery “Sunset” which is a range of reds, pinks, oranges and buff, while the cooler “Slate” features shades of grey with a hint of blue (or was that just my eyes?)

A largely informal evening, blessed with perfect weather, allowed contractors to mingle and have the craic with other layers as well as with various members of the Tobermore team. The event including a rolling video-presentation of the Romex jointing system, which is available through Tobermore, and Richard Evans had also been invited along to show off his clever little paving markers , which attracted a lot of attention from everyone that saw them. 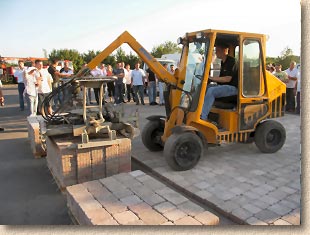 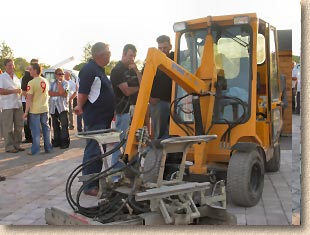 As the sun slithered towards the horizon and the heat began to fade from the day, Graham Pollock one of the wagon driver's responsible for delivering the blocks and flags throughout north-west England, showed off his previously unknown skills at machine-laying, effortlessly zipping back and forth in the little machine, lifting a layer of blocks from the stack and then precisely dropping them into place on the leading edge of the ever-expanding pavement. GB Sales Supremo, Mark Law, is keen to identify a select band of contractors that have the will and the wherewithal to be trained up as machine-lay specialists for the burgeoning ML market that involves standard blocks and the increasingly popular Hydropave permeable paving products. 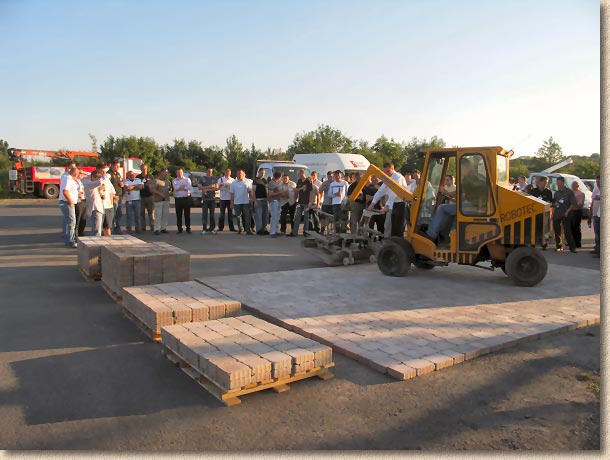 The grand marquee gradually filled up and a rather good three-course dinner was served, prior to a somewhat risqué and at times uncomfortable, “comedian” (his description, not mine) that had some sections of the audience wetting themselves with laughter while others cringed with embarrassment. Managing Director David Henderson closed the evening's events with a few words of thanks for the efforts to date and an outline of how he sees Tobermore developing in the coming year.

It took the best part of a couple of hours for the site to clear, as contractors, specifiers and sales staff gathered in smaller groups to chat, cajole and swap information. It was close to midnight when I left, and the evening was still flush with a residual balmy afterglow resulting from a June day when the sun really was cracking the flags and a wonderful evening of cheerful conversation and networking. 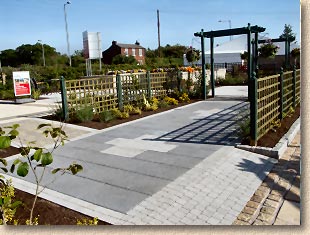