The inaugural show took place on November 23rd and 24th at Dublin's CityWest Conference Centre, and a popular theme amongst those with whom I chatted was the challenge of actually finding the venue within the sprawling CityWest development. In keeping with Irish tradition, adequate signage seemed to have been considered superfluous, and perversely, it was only once the Conference Centre had been tracked down that signs welcoming one and all to the Dublin Stone Show began to appear!

While not as extensive as its cousin on the other side of the Irish Sea, the show itself was well attended, and featured many of Ireland's leading stone companies, along with a sprinkling of British outfits, and the usual panoply of Marble suppliers from Europe. Although some granite products were present, it was notable that the Chinese Granite traders were absent, despite their country's significant contribution in terms of paving materials to the Luas Tram scheme that has reconfigured the centre of the city over the last couple of years or so. Also notable by their absence were the usual massed ranks of Indian sandstone suppliers, although Stone Merchants, a Tallaght-based company with extensive links to that sector of the industry did have a hi-tech styled display marquee that didn't have much in the way of stone, but was certainly luxurious and intriguing.

It was good to see the Geological Survey of Ireland in attendance. As someone that devoted a sizable chunk of their tertiary education to the Earth Sciences, I'm frequently surprised and saddened by the number of otherwise well-educated people in the stone trade that have no knowledge of geology. Scott Engering from the GSI was keen to chat about the geological diversity of the island, and is particularly looking forward to a forthcoming drumlin hunt (look it up!) in Connaught. 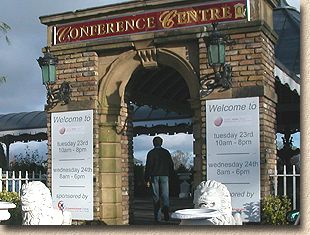 Marble for flooring, cladding, worktops, etc., is certainly a beautiful looking stone, but it's of little import to us from the hard-landscaping side of things, so other than to comment on the good looks and stylishness of both the displays and the stone itself, there's little point in going into any great detail.

So: what was there that might attract the attention of this gnarly-handed ould flagger?

Well the display put on by McMonagle Stone of Donegal was a great place to start. They have the walling stone as well as flooring, but they also have lovely golden Donegal Quartzite that can be supplied as setts or flagstones, and has warm, honeyed tones combined with the typical quartzite glimmer. They also had on show the lovely and unmistakable Liscannor Stone from the western edge of Co. Clare, along with some of their imported sandstones and decorative ornaments. 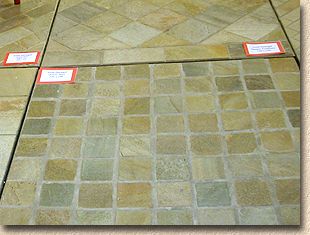 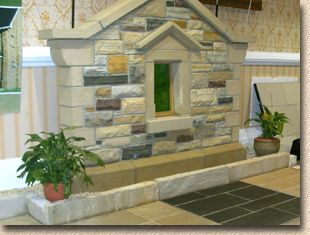 McMonagle have also commissioned a range of own-brand sealants from the Kryton Corporation in Chicago. Padraig Carr talked me through the range, which includes "Hydrostop", a specialist water/weatherproofing product that relies on a unique blend of silanes and siloxanes (waxy stuff) and has been used with great success to protect west-coast masonry from the loving caresses of the Atlantic-driven weather systems while still allowing the stone to "breathe".

Cunningham Stone had put a lot of effort into supporting the Show and used their display area to promote their range of imported sandstone, granite and slate products. It's hard to fathom just why their efforts seem so understated - they obviously have quality products and excellent supplies, but the visual presentation simply didn't demand ones attention. Maybe it's because my passion is paving and their display didn't really focus on that aspect of their product range, but still, they deserve a round of applause for supporting the show.

Stone Developments , meanwhile, had a fairly central position and a well-crafted display that showed off an impressive selection of flags, kerbs, channels and walling stone in the unmistakable Irish Blue Limestone.

The bull-nosed kerbs and the channels shown opposite, both costing around £50 per linear metre, are simply gorgeous: stylish but subdued, classy but not ostentatious, and the perfect foil for any stone paving scheme looking for a contrast to buff or browny tones. 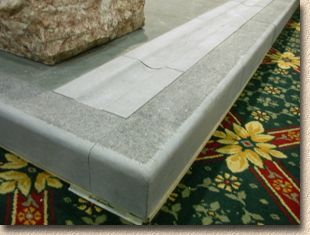 Just across from Stone Developments was " Facing Stone ", a company I've not come across before. I really don't like to condemn, but their installation of paving was possibly the worst I've seen in many a year. It looked as though everything had been laid directly onto the carpet beneath, and then had the joints filled with sand, which may be just about excusable with regular thickness flags, but with cropped setts?? How no-one broke their neck, I'll never know!

I've no doubt the stone itself was perfectly fine, but the standard of presentation was bad enough to deter me from venturing further. I need a stick to help me walk as it is - attempting to traverse that paving could have put me back in a spinal corset! 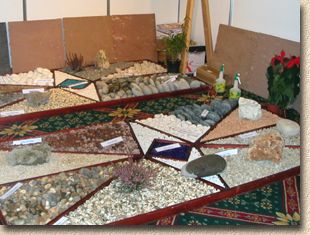 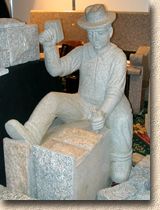 Considering the importers, briefly, Stone Merchants have already been mentioned, and Rivendale Stone from Belfast had a typical selection of paving from India and China, but they repeat the urban myth regarding the so-called 'fossils' found in some of the sandstones.

S&N Granite from Enniscorthy in the granite-rich southeast of Ireland displayed a selection of cills, quoins, lintels and ornaments from the Orient, including a rather eye-catching Stone Mason figure that is available in 3 different sizes.

Flying the flag for Yorkshire grit, Bradford's very own Russell Stone had an assortment of new and reclaimed sandstone and gritstone. The new stone comes from their quarry nestled in the Aire Valley. Yorkstone isn't as popular in Ireland as it is in Britain, mainly because of the cost, but also because there's a tradition of using granite paving for civil schemes. However, there has always been some demand, and with the renewed interest in using stone for paving there's a good opportunity for suppliers of yorkstone to market their stocks. 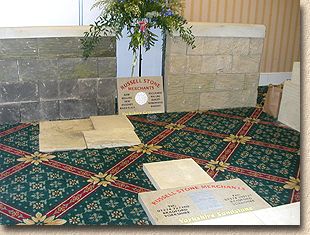 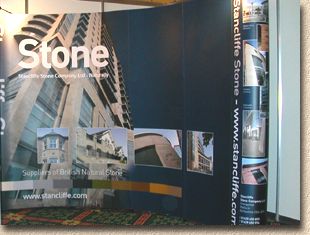 Also on parade were the Stancliffe Group , based in Derbyshire and suppliers of various types of stone from Scotland and Northern England, including the St. Bees Head red sandstone, as well as a range of yorkstones and limestones.

I had hoped for a chat with someone from Stancliffe, as I was seriously impressed with the quality of the stone they supplied to a large private development near Chester over the summer, but they must have been on a toilet break when I came to their stand, and I didn't get the opportunity to call back. I'm sure our paths will cross again at some point.

One refreshing improvement on the London shows of previous years was the presence of a number of tool suppliers specialising in products for the stone industries. There were a number of powered splitters on show, with video footage of them in use on a commercial production line, as well as polishers and a vacuum lifting device. JB Tool Hire from Hinckley in Leicestershire had a nifty kerb/flag lifting yoke that can be bought outright or hired on demand. It's a purely mechanical device, based on a scissor-lift principle, so there's nowt to go wrong! 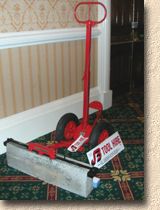 In amongst the cutting discs and grinding heads was a selection of hand tools, including the increasingly rare pitching chisels (pitchers) and mason's mallets. One of the suppliers, Stone Industry Supplies of Stradbally in Co. Laois, reported that they'd bought the entire stock of 40mm pitchers from a French manufacturer (Gillet) and it would be January at the earliest before any more became available. The Harbro Supplies stand had a more extensive range, including combs, punches and carving chisels, but the only person available to speak knew little or nothing about the hand tool range, but did promise to ensure someone contacted me.

Overall, it was a very good show for what is, after all, a market that's only around 6% of the size of that in the UK. The signs on the way out invited everyone back for next year, but the show will need a wider support base and better advertising amongst the Irish construction industry if it is to develop and grow into a successful, annual event.

For me, the best point was the inclusion of stoneworking tools and small machinery. I wouldn't like to see any subsequent shows dominated by massive splitters, polishers, flamers and the like, but it is good to see how stone is prepared from the market, and the contacts I picked up for providers of mason's tools are invaluable. If there is to be a Dublin 2005 Show, then it would be good to see more of the smaller Irish stone companies, and a few more of the Brits. A handful of extra signs alongside the N7 would help, too!