The one item missing from the Glee review published here a couple of weeks ago was fuller coverage of what BorderStone plan to unleash on the Great British Public next year. Events conspired to prevent me being able to give any detail worth reading at the time, but since then I've been given the opportunity to look at what they have planned and talk through the ideas with a couple of the marketing team. 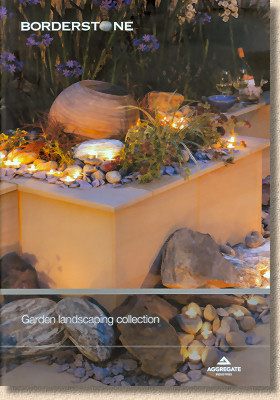 If we imagine there to be a continuum of hard objects for patios and gardens, ranging from concrete and natural stone paving right through to statues, water features and bird bath type silliness, BorderStone straddles the lot. It seems that its focus over the last couple of years has been re-targeted to aim directly at the garden centre market. The paving they offer tends to be conservative and DIY-friendly, while the ornaments run from subdued and cultivated to god-awful tacky, and therefore accurately reflect the scarily variable tastes of the British public.

When it comes to all that ornamentation, I don't feel qualified to comment. It all boils down to personal likes and dislikes. How else can you explain the sort of tat that features cutesy animals and comedy boots? You either like it or you don't. I don't believe it's possible to state that such-and-such is a good statue/water feature/bird bath with real potential and a guaranteed winner. Equally, we can't really state any particular item is bad. All we can say is that we either like it, dislike it or are completely indifferent to it.

Conversely, I know that when it comes to paving and hard-landscaping, its utilitarian function allows us (or me, at least) to temporarily put aside questions of taste and preference and judge the product by its potential in creating good design, its ability to complement other hard-landscaping features, its usefulness, its versatility and its relevance to current fashions.

So, I'll keep me gob shut about all the tat and restrict myself to pontificating on the two new items in the paving range.

I suppose Valley is an archetypal paving product for the Garden Centre trade in general and BorderStone in particular. It's quirky, but stylish; distinctive but subtle; smart but limited. It's a six-piece set of irregularly shaped pieces of “reconstituted stone” (pronounced 'con-crete') which can be fitted together in three different ways to create paths and patios, or used individually as stepping stones.

The colour is said to be Charcoal, but the images I've seen, and the glimpses stolen under the dreadful sodium lights at the NEC, suggest it's a pale grey. I've not yet seen it in natural daylight, so maybe it is darker than it appears, but the pale grey seems perfectly fine to me. 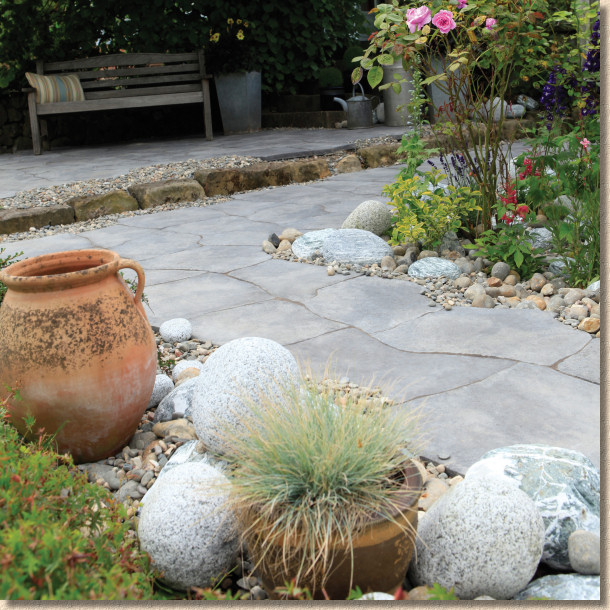 As with many paving products, Valley is supplied as “Project Packs” with 24 units of unspecified sizes linking together to form a paved area of just over 4m², which suggests that each piece must be around 400x400mm. The flags are said to be 38mm thick, which is close to the minimum for a wet-cast flagstone, and contain 30% recycled aggregates. Jointing could be tricky, so it would seem that a decent resin or polymeric mortar would be the logical choice rather than the traditional sand and cement. 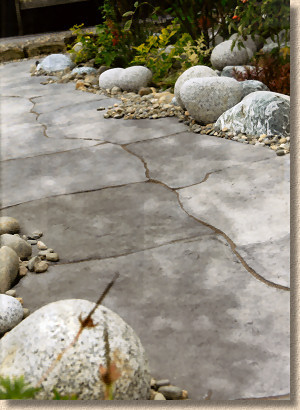 As already stated, I haven't seen this in the flesh, but the posh photies remind me somewhat of the limestone pavements found in wilder parts of northern England, with its muted colours and not-quite-straight criss-crossing joints (or grikes, as they are known to geologists). It's certainly different, but how will it sit with Garden Centre buyers? My gut feeling is this is a product that needs to be available via the more contractor-friendly routes to market. Garden Centres are not renowned for their keen prices and for an idiosyncratic paving such as this can often be killed by unrealistic pricing. If it was made more readily available, and at a reasonable price, it could offer a an attractive alternative to the more usual fare for country or cottage style gardens.

The other “newbie” is a natural stone, a distinctive banded sandstone imported from India but with more than a hint of the banded yorkstones of north Yorkshire. To be honest, we've seen this tone before through other importers, but what makes Purestone Vista York Gold , as it's been dubbed, different is the provision of L-shaped pieces which facilitate the creation of concentric squares.

The smaller pack features flagstones with a 300mm gauged width while those in the larger pack are 500mm. If you wanted to extend the concentric square beyond 2700mm, or to create a rectangle rather than a square, you're buggered! Yes, I know it's possible to extend the concentric square using the 500mm gauged pieces, but you wouldn't be able to use the L-shapes and would have to rely on lapped or mitred corners instead.

This seems like a major design flaw. As noted previously, this particular stone is very attractive which explains just why it's available from a number of other suppliers, so Borderstone have to offer something unique if they want to compete. The L-shapes should be the answer, but the design possibilities are hamstrung by the fact that the two packs are not compatible. It's the equivalent of a model kit where you can build only the one toy, whereas your potential customers have the option to buy studded building blocks which enable them to create a whole range of toys.

Given the limited marketing opportunities available via the Garden Centres, this may not be too much of a problem, but if Borderstone's parent company wants to expand that market and make this product available via Builders' Merchants and Landscape Suppliers, then something has to be done about this compatibility/extendibility issue.

And talking of Borderstone's wider family, big brother Bradstone has launched its own 'approved contractor' scheme, to be known as " Assured ". Discussions held with contractors over the summer via this website suggest awareness of this latest addition to the ever-growing roster of pocket-emptying vetting schemes is not as high as I'm sure Bradstone would like. Given that Bradstone are enabling contractors to associate themselves with a highly respected brand, I'm sure that this "Assured" will have a more pro-active attitude than most of the " pay and you're in " schemes that are actually blighting the trade, but do we actually need another scheme?

I've made public my opinion of these approval schemes on many previous occasions. Why do we have so many, with each major manufacturer having their own, and each of them charging a not-insignificant membership fee? A contractor wanting the alleged accreditation of the three biggest British hard-landscaping manufacturers will have to fork out close on 1500 quid per annum, and if they wish to add the only creditable block paving trade association, and possibly one of the smaller schemes, that figure would very soon be over two grand! How is all that money recouped? The only way is via higher prices to the customer, and this at a time of national austerity (or Os-terity, possibly).

I resolutely believe there should be a single, industry-wide, independent, fully-vetted and accredited contractor scheme, which covers members for whatever paving they are laying, regardless of manufacturer or importer, but the possibility of that ever happening is remote, due to the politics and the finances involved.

And so we have yet another scheme with laudable aims, but will it actually benefit its members and the general public? Having a brochure featuring a cover graced by some grinning eejit kneeling on cold flagstones without knee-pads in front of a dangerously propped stack of flags , and then another clot inside, laying block paving without an edge course doesn't exactly inspire me with confidence!