Four students at Writtle College have set new standards with the construction of a show garden as a final part of their three-year Horticulture National Diploma.The English style garden, designed by Nigel Sheldrake, from Maldon, uses high specification materials, including Polar Granite paving donated by Global Stone , the Colchester-based importer and wholesaler of natural stone.

The other students who built the garden with Nigel were Amy Watsham from Mersea, Sharon Carrington from Benfleet and Stephen Austin from Norfolk, under the supervision of lecturer Ben Wincott. 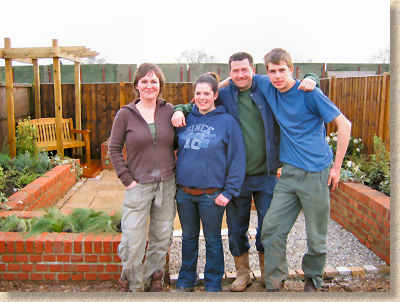 "We have been able to produce a much a higher spec this year as we have been provided with much higher quality materials,"

said Mr Wincott. The garden also displays a water feature, pergola, bench and raised beds planted with shrubs as well as the paving and gravel.

"Lots of tutors and students who looked at all the gardens on Friday were very impressed by what they saw. As well as constructing the garden, the students were responsible for contract and project management and risk assessment.

In total there were three show gardens completed by students.They will now be finishing their course three months earlier than any other horticultural students in the country so they will be in a position to be the first on to the jobs market."