The doors have closed, the car parks are empty and the stands so carefully constructed just a few days ago are now no more, ripped apart, shredded, scrapped and unceremoniously dumped in the over-priced skips lurking outside the back doors. Glee 2004 is over and done and the burning question that everyone asks – has it been a good show?

Overall, there's not been very much that's strikingly new. Yes: we've seen the debut of a number of new companies, and we've seen a handful of new products, but by and large, I got the impression that there was a lot of re-working of old ideas and a sense that everyone was desperately trying to figure out what would be the Next Big Thing, but no-one knew, and so they tinkered with what they already had, adding a new size or shape or colour, and hoped the buyers and contractors and everyone else would be suitably impressed.

Attendance seemed to be fairly good. I don't have the 'official' figures, but from talking to a variety of exhibitors the general consensus is that Sunday was fair-to-middling, but not as busy as they'd hoped, Monday was just hectic, with a seemingly non-stop stream of visitors from 9 in the morning until closing time at 6pm. Tuesday was a little more subdued, but still busy, and the anticipated last day tail-off around 2-3pm didn't happen until a couple of hours later.

Of course, the official verdict form most of the exhibitors is that they've had a superb show and expect lots of sales to follow, but, when you speak to them off-the-record, they are a little less optimistic, a sense that the market is a little bit tougher than it has been over the last couple of years and that they are going to have to work hard with the follow-ups to turn enquiries into sales.

So: who was there, what did they have, and what did we see?

In the world of pressed concrete paving, most of the usual suspects were there, of course. Marshalls and Aggregate Industries (in a variety of outfits) are the big two and the lynch pins for those of us interested in paving and hard-landscaping. The TopPave-Cempak conglomerate showed, as did the Pavestone Crew, but Brett pulled out a couple or three weeks back, mumbling something about wishing to focus on their existing customer base. No sign of RMC, Plasmor, Formpave but then CBPs aren't a key item for GLEE, however it was good to see that Tobermore had entered the fray, and EJ Stone confirmed their plans to go into CBP production in the very near future.

Tobermore Concrete , over from Norn Iron and exhibiting in mainland Britain for the first time, had managed to get themselves a prime location right alongside the entrance to Hall 7 and their stand looked clean and crisp with a paved floor display of various pavings, supplemented with rack displays showing their wider range. I love their Retro paving, and so did many of the visitors, according to GB Sales Manager, Mark Law, but Brian Wilson, the Sales and Marketing Director, was pleasantly surprised at the level of interest in their Secura retaining wall system, which is one of those classically simple answers to an all-too-common garden construction problem. It's reminiscent of the old stacked broken concrete flags idea, but with added subtle colouring and a softer tumbled appearance that would look perfectly at home in any garden. 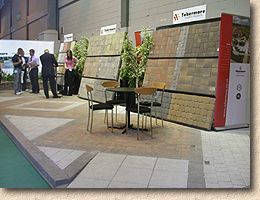 Marshalls had a subdued stand, compared with previous efforts. Divided into 4 quadrants with a store hut in the centre, each quadrant featured a different group of products.

Visually, the most attractive was the side featuring the granite paving and the new Argent blocks. I've long admired the Argent flags, but them I'm a sucker for simple, classy elegance, and it's great to see the idea being extended into CBPs. These are a bloody good product that I would love to see take off. They'll be great around a conservatory or as a patio area in a corner of the garden that needs brightening up a bit.

Travelling clockwise from here, next came the Chancery Flagstone quadrant: nowt new to report, but there was some tie-in with the National Trust that I didn't quite follow. However, the adjacent quadrant featured next year's new idea in CBPs: the Tegula Duo block. Basically, this is a standard teg block, but with a different colour option on either face: so, laid one way, they are “Terracotta”, a colour previously seen in the Tegula Deco range, but turn them over and they are “Cinder”, a sort of red/charcoal blend. There's another variant, featuring “Cotswold” on one face (again from the Teg Deco range) with “Harvest” on t'other, a buffy-charcoal mix.

This product led to some debate between Head Honcho Vince Matthews and the assembled Marshallettes on one side, and meself on the other. They correctly point out that contractors and Builders' Merchants can now have access to two colours without having to buy two separate packs, making life a lot simpler for them.

However, I can't see the benefit to the consumer. There may be a small price saving because the contractor doesn't need to buy quite as many packs, but will this really be passed on to the client? And what about the “reversibility” feature? If we had an iffy block, or one that became stained after laying, it could be flicked out, turned over, and relaid. That won't be possible with these new Duo blocks. Further, as some Contractors know, all so-called double-faced blocks actually have a 'best' face and a 'not-quite-as-good' face. This stems from the fact that one face of the block is formed by being pressed against the mould itself, while the other is formed by being pressed from above by the hydraulic ram. Which is the best face with these? 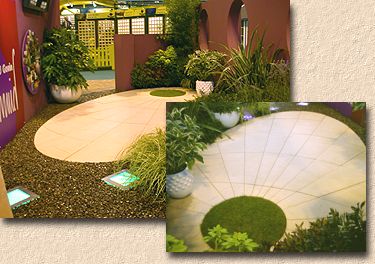 Finally, there was the Diarmuid Gavin Garden bit, loosely based on his entry in this year's Chelsea Flower Show. This featured an ellipse of Perfecta-like paving that can be used as a garden feature. It certainly attracted a lot of attention, particularly when the man himself was there on Monday schmoozing with the public, but I felt it was a 'garden feature' rather than a paving item. It can't really be laid in a variety of ways, or easily linked in with other pavings. It is what it is – an ellipse of paving. It's pretty, it's clean and attractive, but I can't see just how much demand there will be from those whose heads are not turned by a celebrity endorsement.

Meanwhile over on the Bradstone - Charcon stand, the emphasis was very much on wet cast products from the Bradstone incarnation and not much new from the Charcon side of the business, but then, Glee is aimed more at gardens and not so much at driveways or civils, so maybe the Big Wigs back at AI Towers decided to underplay their CBPs and focus instead on the wet-cast.

There were some products from Charcon on display, including a textured Woburn paver and a half-battered kerb-unit in the maple colouring. I wasn't too sure about the maple kerb – it may be a little bit too colourful for some. I know from my driveway contracting days that most customers preferred kerbs to be of a single colour, perhaps charcoal or red, rather than a blended colour, such as, say, brindle, but then, it'd be an awful boring world if we all liked the same things.

My favourite Bradstoneite, the ever-lovely Johanna Beck, reckons the Old Town Limestone products will be a real winner, particularly the edging kerb, which she says works a treat with bitmac driveways looking for a rustic-type of edge restraint. There's also a double-faced walling stone as part of the same range. Lovely creamy-colours and subtle texturing, but would the flags be too bright in a sunny garden? 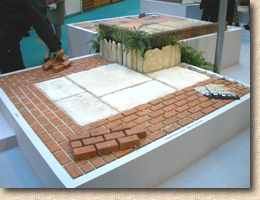 They also had some of their natural stone products on show, including a nice-darkish slate, but the pigging picture hasn't turned out well on my digicam, so if any Bradstone folk out there have a pic and they want to send it to me?

The Carpet Stones are still there, selling well, but not as prominently displayed as last year. I had thought, before the show, that they might have expanded the range this year, as I know they have been a popular item with DIYers, but as far as I saw, there's nowt new to report.

The Tarmac group were also appearing in two of their guises: TopPave for the paving and Cem-Pak for the decorative aggregates.

With their TopPave hat on, they were showing this year's Aura blocks, but only in two colours, the Silver Fleck, which has been on sale this year, and a newish reddy-brindle colour. The also have a new size for the Antique, 200x266mm, giving the range a total of 4 sizes and enabling a whole host of new laying patterns to be designed.

Lenses or ellipse shapes seem to be a popular new idea, and here's another one, from TopPave, created as part of their wet-cast range in a Honey sort of colour. 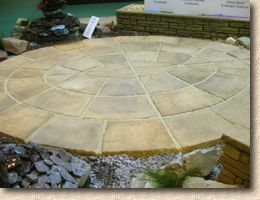 I can see how this would appeal to a family, as the long axis provides plenty of room for the longer, 6- or 8-seat patio tables, but I don't like those wide joints. The TopPave bod I spoke to on Sunday seemed to thing the flared edges of the flags are a great idea, even iwhen it was pointed out that, with the bases of adjacent flags were in direct contact there'd still be a 25mm or so gap. I know there's some folk that, for reasons best known to themselves, prefer wide, mortar-filled joints on patios, but for me, and for most right-thinking folk, we like to see the paving that's cost us all that money, and not the mortar that's cost next to nowt!

It's difficult to do justice to decorative aggregates at these shows. The loose gravels need large areas to look their best and give a good impression of themselves, while the larger rocks can look out of context, so I tend not to spend much time trying to capture them on the digicam. Several of the aggregates firms showing at Glee seem to have a similar opinion and were concentrating on showing opff their merchant services and packaging with only a token effort to show off the aggregates. However, this rockery stone from Cem-Pak caught my eye: They call it "Winter Rose" and it's a glistening, sparkly rock with bands of grey and bluey-silvery grey interspersed with a soft pinky-rose colour. It's bound to attract attention if used in the right way. 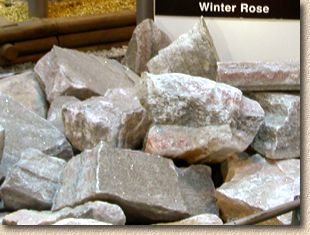