Home / About Us / News / Chelsea Diggers

It's been a good while since the RHS Show at Chelsea troubled my diary. Although gardening is my only hobby that doesn't directly involve a pub, I tend not to bother with the trawl down to that London and the fretful battle with the crowds, preferring to wait for them to come to me, at nearby Tatton Park, or, even better, the less frenetic yet more friendly atmosphere at Southport in August. And I go to see the gardens and the planting, rather than the paving.

However, since Messrs Marshalls undertook the onerous task of “supporting” the RHS endeavours this year, my interest in the West London wallet-emptying exercise has been renewed, and the invitation to visit as their guest was too good to turn down. So, an early train from Bank Quay and a stuttering taxi crawl through central London saw meself and Mrs Taz arrive just in time for the post-lunch heatwave.

We started off with our generous hosts display, and a guided tour conducted by Marketing Director, Chris Harrop, who was entertaining and keen to stress the thinking behind the garden, namely sustainability, with a capital S. So, we had walls-cum-fences manufactured from reclaimed scaffolding planks, a water feature fed via the harvesting of rainwater and domestic grey-water, gabions filled with rubble, a study built into an earth bank that would keep it cool during the day and warm at night, surfacing and walls of resin-bound recycled glass, and an emphasis on planting that would relish the dryer-than-normal conditions predicted to be heading our way courtesy of global warming.

I have to admit to being pleasantly surprised: it would have been very easy (and totally naff) for Marshalls to use their multi-million pound splurge as an excuse to build a product showcase, featuring walling, paving, drainage, sheds, garages and greenhouses from their latest residential catalogue , but instead, they built a show garden around a theme, and completely downplayed their own products. In fact, the only Marshalls' product of note was the sawn-six-sides Haworth Moor Indian sandstone that Chris revealed will be officially launched at Glee come September. 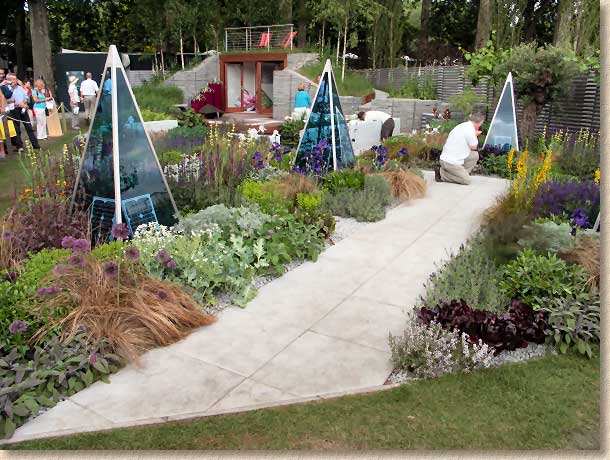 I'm not a garden designer: I sometimes delude myself that I have an eye for hard-landscapes, but I wouldn't know where to start with a full landscape design. In a low scale replication of life itself, my own garden has evolved as a series of gradual mutations, rather than be created through any sense of intelligent design, so my opinion is worth less than bugger all, but for me, the overall layout and look of the garden worked wonderfully well. The underlying theme was not overt and 'in-yer-face', yet was evident throughout when you looked into the detail. It was definitely a garden with a hidden message, rather than a message with a hidden garden.

I was saddened to learn that such a well-conceived, not to mention important garden had been given only a Silver medal, a stingy and short-sighted reaction from the Judges, in my book. I had thought they would be rewarded with a Silver-Gilt: I'd reasoned that Gold was probably expecting too much for a garden that revolved around a socio-political theme rather than traditional horticulturalism, and there would be the inevitable begrudging nay-sayers who would convince themselves that a Gold had been indirectly 'bought' via the sponsorship deal, so Silver-Gilt would seem fair. Silver is … well, it's more a matter of what silver isn't, and it isn't fair to proffer such a stingy reward for a garden of such relevance.

Of course, part of my reasoning when attempting to second-guess the RHS judges was their traditionally conservative appetites. I felt reasonably confident that Marshalls wouldn't be heading back to Halifax with a Gold because their effort was distinctively different from the usual Chelsea fare, so to learn that Bradstone had not only won Gold with their left-field Martian garden, but had also been awarded the highly-coveted Best In Show completely threw me.

The 600 Days of Bradstone garden, designed by serial medal-winner, Susan Eberle, really was 'from another planet'. You've never seen a garden like this, and all those 'out there' comments are eerily pertinent. It was “unearthly”, “alien” and “outlandish”: that's the whole point of it. 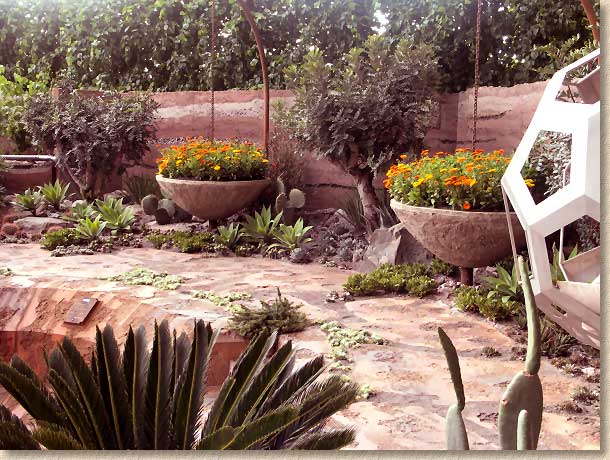 For this garden, the responsibility for the guided tour fell to Marketing and Strategy Director, Mark Allen, and despite his lack of gardening empathy, he did a wholly convincing job of explaining the idea and highlighting the key features. This was one of those gardens that had hidden treasures tucked into every nook and cranny, and like their manufacturing chums at the other end of Main Avenue, the temptation to festoon the exotic terrain with Bradstone/Charcon product was mercifully resisted, but in its place, the team at the Croft factory had taken the opportunity to showcase their skill with concrete, and the pre-cast 'rest pod' was the apogee of the art. Television and web images just could not do justice to this stunning piece of concrete art, where the texture, the colour, and the way that the rust-hued structure was streaked, corroded and pitted in an uncanny mimicry of an abandoned hulk. The rammed earth-crete walls with orangey-red strata and H-U-G-E slabs of non-terrestrial rock that formed a remarkably informal yet functional pathway through the garden added to the sense of being out of place, on Moon Base Alpha or one of those planets encountered by the Enterprise.

Mark was generous in giving most of the credit for the implementation to marketeer Ian Wright, and when I caught up with him later in the day, he was still grinning like the proverbial Cheshire Cat. Those slabs weighed well over a tonne apiece, and had to be individually craned into place; there were times when he wondered whether it would all come together, and there was a buzz of satisfied success about him as he rightly revelled in the post-award afterglow. I'm not belittling or downplaying the efforts and obvious skill of the designer, but it takes an enormous amount of commitment and energy to turn a designer's dream into a Chelsea reality, and it's only right that such efforts should be acknowledged. Designers rarely miss out on the plaudits, but the backroom boys are often overlooked.

In the Grand Pavilion, Instarmac made their debut by working closely with Gloucestershire-based manufacturer Organic Stone who had produced the paved areas in line with the designs specified by Hillier Nurseries and Garden Centres. They installed Flowpoint BS7533, a high-strength fast-settting cement-based paving grout as the jointing material for the paved entrance areas and pathways forming part of Hillier's Gold-medal winning display.

Hillier and Organic Stone are said to be very pleased with Instarmac's Ultracrete Flowpoint product. They claim it saved a great deal of time over conventional pointing and remained in perfect condition, even after being trafficked by many thousands of visitors to the show. The press release also states that much praise emanated from both trade and public on the authenticity of the cobbles with many people claiming they could not believe they were individual cobbles. The Stonewaves Mull Cobble is moulded using selected paddle stones from the shores of Easdale Island overlooking the Isle of Mull, put together into a twin tessalating paving design. The 40mm Stonewave Mull Cobble was launched at Chelsea and a 65mm version for driveways will follow shortly. 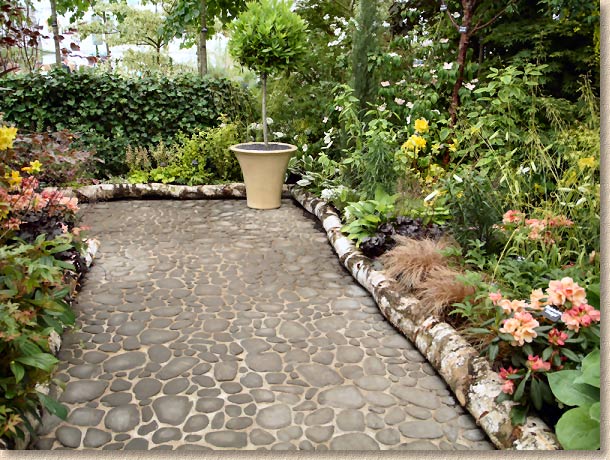 Flowpoint grout is particularly suitable for both highly trafficked areas and on irregular paving where its flowable consistency ensure 100% filling of the joints. It is installed as a slurry to large areas or via a watering-can application to smaller areas. Once initial cure has begun the grout remaining on the surface is simply hosed off. It can be used for joint widths of 5-50mm and depths of up to 200mm in a single pour, locking the individual elements into place, and providing complete stability to the joints. It is claimed that it will not stain even the roughest textured surfaces.

Two final thoughts for this Chelsea round-up: Firstly, Brett were in attendance, but as there was no-one on their show garden, there's not much I can tell you about it, other than it looked attractive and in contrast to the previous gardens, was 'product rich'.

And secondly, with the notable excpetion of the three gardens already mentioned, other so-called "Show Gardens" featured some of the worst paving I've seen at a top garden exhibition for many a year. It was all there: the upside-down Indian sandstone flags, the lips that'd snap yer ankles, the crumbling pointing, the loose and dangerous miscut pieces. I know it's meant to be a gardening show, but good quality paving is an intimate and essential part of all good gardens. Several gardens at Chelsea were appallingly let down by the awful workmanship on display.