Reflective staining is a phenomenon most commonly observed on stone flags, particularly some imported stone flags, which have been improperly laid on spots (dabs) or a ring or of mortar. It can seriously and permanently disfigure paving, but how can it be avoided?

What is Reflective Staining:

You know that old saying about a picture being worth a thousand words.....?

Reflective Staining is a distinctive pattern of marks or stains most commonly (but not solely!) seen on porous stones such as sandstones and granites and caused directly, no argument, undeniably, no matter what the contractor says, by improper installation. Specifivcally, the use of spot or ring bedding.

Find out why Spot Bedding (dabs) is not suitable for laying paving.

It's most frequently seen with the more porous sandstones from India, particularly Mint, but also with many of the others. It is fairly common with some of the honed or polished sandstones, especially those that have been chosen by the manufacturers because they are soft and easier to grind than, say, Kandala Grey or Raj Green, although it has been 'spotted' on these stones (see what I did there?!)

It's also been reported on some granites, most notably they highly porous G603, often sold as Silver Grey or some fancy name such as Arctic Dawn or Polar Mist.

Incidences of this form of staining on limestone are rare. There have been photographs purporting to be limestone, but I've not personally seen any in the flesh, as it were. Slate, basalt and porphyry seem to be trouble free, so far.

It can occur with some pressed concrete flags but this is much less common, and, to date, there are no recorded sightings with porcelain/ceramics.

Note: there is a form of circular staining which affects concrete flags, both pressed and wet-cast , that is NOT a result of spot bedding, but arises from the phenomenon of differential curing. This is considered on a separate page .

In appearance, it looks like dark markings, circles, rings or blotches on the surface of the flagstone.

These markings are actually a 'reflection' of the mortar bedding beneath the flag, hence the name.

The marks can appear at almost any time in the service life of the pavement but they are much more likely to be observed in the first few months after the paving has been laid.

Initially, they may appear faint and barely discernible but they often become stronger, darker, more marked, with time.

In some cases, some parts of the flag are colonised by lichen and algae which can have the effect of further emphasising the appearance of the stain, although thorough, sensitive cleaning can sometimes ameliorate this problem (but not eliminate it completely.)

It's not possible to be absolutely certain about this, because each incidence is unique, but, from what we've seen to date, it seems to be a more-or-less permanent disfigurement.

Yes: there have been a couple of jobs where the 'stain' did seem to weather out after one or two years, but it really is one or two jobs, and there's a strong likelihood that the original damage was minimal to start off with.

For the vast majority of jobs, it seems that the stain does weather and become less noticeable, but never completely goes away, and most clients report that they are still aware of the staining five or six years after installation.

Reflective staining results from porous flags being laid onto spots or dabs or rings of mortar.

It also seems to be more commonly observed when relatively porous flagstones have been laid without the application of a bond bridge (primer coat/slurry sealer) to the underside of each flag. The primer will often act as an impermeable barrier to the migration of moisture and salts through the stone, and so prevent the appearance of the distinctive disfiguring marks.

The contact of the porous stone (or, as mentioned, concrete) with the mortar affects the flagstones in several ways, most notably in their porosity.

Permanent contact with the mortar spots reduces the porosity in the area of contact and therefore surface water cannot migrate through the flagstone as freely as is the case in those parts of the stone not in contact with any mortar. 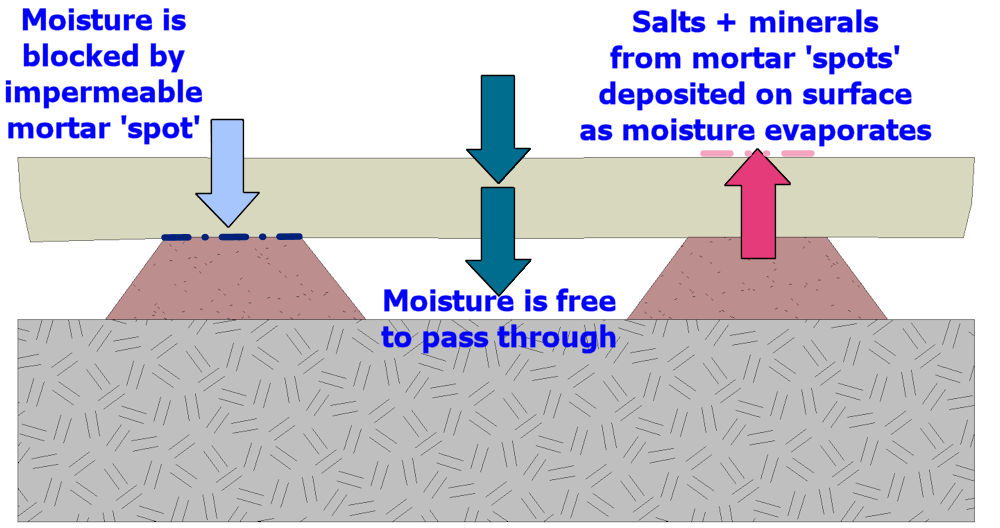 Further, salts and minerals from the mortar can be drawn up through the stone due to capillary action (wicking) enhanced by evaporation from the surface, which results in these salts being deposited on the surface as a visible stain.

In some instances, these salt deposits can act as a food source for vegetation such as algae and lichens, which, in turn, can darken the surface of the stone.

Finally, variation in the porosity of the flagstone may result in a difference of how attractive is the surface to colonisers such as algae and lichens.

Why only with flags on a partial bed?

When a flagstone is laid on a full mortar bed, the whole of the flag is in direct contact with the bed, so there is no significant variation in the porosity of the stone from point to point. Other than natural variation in the stone itself, the flag is, more or less, of the same porosity throughout and therefore any differences in moisture retention, salt deposits and vegetative colonisation are much more difficult to identify, as the flag tends to present a homogenous surface appearance.

What can be done about it?

In short: practically nothing.

Reflective staining occurs when flagstones are incorrectly laid. There is no magic fairy dust that can be sprinkled onto the paving to alter that fact.

In some cases where the marking is emphasised due to colonisation by algae and/or lichens, careful cleaning may help by removing the vegetation and/or salt deposits that are emphasising the stain. However, even the most powerful cleaning will not permanently remove the heaviest stain, which is often cementitious, or calcareous, in nature.

And it's that, let's call it, "hard" staining that is the main problem. As mentioned above, the salts and minerals emanating from the mortar are carried through the capillaries of the stone to eventually appear at, or very near to, the surface. At this point, they tend to 'set'. The chemistry is too complex for a website such as this, but essentially the exposure to air, and carbon dioxide in particular, enables these salts to crystallise and chemically bond with the substrate. In effect, it's akin to a cement or concrete stain, and we all know how difficult it can be to shift these from the more popular imported sandstones.

The problem is exacerbated by the fact that the 'stain' usually permeates the full thickness of the flag, from the point of contact with the partial mortar bed right up to the surface. Consequently, surface cleaning serves only to expose yet more 'stain' beneath, and even highly aggressive grit or shot blasting can only reveal even more of the 'stain'. With honed or polished paving, resorting to additional surface grinding will, you've guessed it, simply reveal yet more stain.

So, the upshot of all this is that, once reflective staining appears on paving, it is effectively ruined, and ruined permanently. There is no fix, no cure, no remedy that will rid the flag of the staining and leave it in an acceptable, presentable condition.

There is some indication that, with some staining on some types of paving, the staining will dissipate over time, primarily by weathering, and that it might be possible to accelerate that weathering by exceptionally careful and repeated use of weak acids to gently wash the surface, but it's not possible to state this will always be successful or to predict just which jobs are more likely to benefit from such treatment. There are so many variables to consider, not least of which is the precise make-up of the bedding mortar itself, that the best that could be expected is an educated guess.

With much of the stone that is affected by reflective staining being relatively cheap (under 30 quid/euro per square metre) it's standard practice to assume that the flags cannot be rectified or salvaged, so must be replaced. They have to be written off.

When a more expensive secondary processed stone is involved (honed, polished, hammered, etc.), the cost of any treatment and the likelihood of such treatment being successful may be worth considering but it is a rare event for such stone to be salvaged in a condition that makes it fit for re-use.

Having said all that, some clients have found that use of a rich colour enhancer or sealant, one that darkens and allegedly 'enriches' the colour of the stone, can, in some cases, make the staining less noticeable. Again, it's not possible to state that such-and-such a sealant always works when applied to such-and-such a stone, but in those cases where there is no recourse against the installer responsible for ballsing-up in the first place, such a strategy could well be worth considering.

If the stained flagstones are lifted and re-laid with full mortar bedding do the stains go away?

No: the stains will not go away.

Re-laying them correctly, with a slurry primer to act as a blocking barrier, will simply maintain the existing stains as they are.

Laying them with no slurry primer/bond bridge in the hope that new stains will somehow magically "fill in the gaps" between the existing stains simply adds additional 'fuel' for the effect, so the unstained areas become stained and the already stained areas become even more stained. The overall effect is to make matters even worse.