Home / About Us / News / Permeable paving: it's child's play!

Rainey School in Magherafelt, Northern Ireland, recently needed to upgrade their car park and playground, and decided to maximise the educational potential of the construction work by involving the pupils. Working on the latest "best environmental practice", they opted for Hydropave permeable block paving from local manufacturer, Tobermore Concrete Products .

Pupils at the school have been involved in monitoring water quality, and their endeavours have led to them appearing on local TV. Sixth formers (what's that: Year 12 or summat?) were invited to submit a 500-word summary of the case for permeable paving, with the writers of the winning entry being invited to present their report to the 9th International Conference on Concrete Block Paving to be held in Buenos Aires in October, 2009. 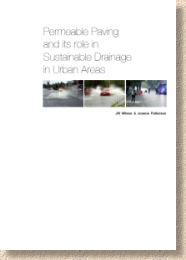 And in a very welcome bout of festive largesse, Tobermore have once again been donating money to a range of charities in lieu of Christmas gifts for customers. This has become something of a tradition over the past seven years and is widely appreciated by customers, contractors and specifiers alike, who would rather see money go to good causes rather than be spent on yet more calendars, pens and mousemats. This year, Tobermore have decided that the donation of £27,000 will go directly to the Barnardo's 'Christmas Fund' and will make a huge difference to the lives of children throughout the Britain and Ireland.

Barnardo's is the most significant children's charity working throughout Britain and Ireland: They are committed to changing the lives of children who, without their help, often can see no future. Barnardo's works to deliver meaningful services to approximately 120,000 children and young people in over 430 local services, and this focus on working at a local level allows Barnardo's to respond to the needs of children and young people at source.

Right: Tobermore’s Managing Director David Henderson is pictured with the Tobermore Senior Management Team presenting Jeanie Rodgers from Barnardo’s with a check for £27,000 as part of Tobermore’s donation to Charity for 2008 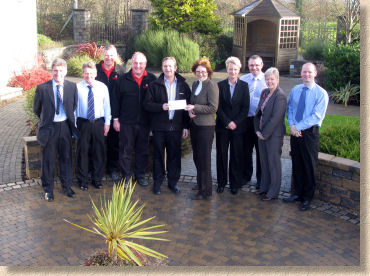