Home / About Us / News / Water and Stone

Gloucestershire's Forest Pennant Ltd , exclusive suppliers of the Royal Forest Pennant Stone for paving and walling has taken a huge step in reducing the company's carbon footprint by developing its own onsite hydroelectric project. The firm has been deep in discussion with various agencies and plans to source up to 70% of its electricity from a scheme to be installed close to its site in the Forest of Dean. 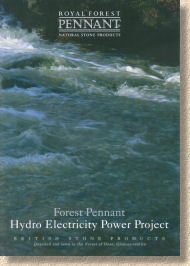 Approval for the project came after a series of consultations, including a feasibility study which looked at how the local stream could be used to generate hydroelectric power, environmental surveys of the potential impact on local wildlife including crayfish and water voles, and discussions with the Environment agency, Natural England, RSPB and the Forestry Commission, all of whom offered their full support. The scheme has a projected cost of approximately £70,000 and is being financially supported by the South West of England Regional Development Agency.

When the hydroelectric installation is commissioned in the autumn, it will complement Forest Pennant's existing environmental strategy which includes re-processing of off-cuts to minimise wastage, recycling water from the sawing process, restoring worked sections of the quarry, and, most importantly, no costly haulage of imported stone from overseas locations. Once running, the hydroelectric plant should result in the company becoming one of the most sustainable and environmentally-considerate sawing works in the country, generating up to 13.5kW of power, returning the all of the water to the natural watercourse, and resulting in no waste products from the generating process.

The scheme will take advantage of the eight metre head of water that exists at Cannop Ponds , adjacent to the main site. Originally created back in the 19th century to power a local ironworks, the ponds were formed by damming the Cannop Brook which flows south through the forest before joining the River Lyd.

Meanwhile, the supply of distinctive stone to prestigious projects continues, and the company has recently provided 770m² of Pennant stone in the form of flags, setts and kerbs to a development at Crosskeys Corner in Caerphilly.

The brief required a natural stone that was local and reflected Welsh character and heritage, so Pennant stone immediately fitted the bill.

"The natural stone has an impressive mix of colours", said Matthew Cole, the development team manager of Groundwork Caerphilly. "We found the stone to be of consistent and excellent quality, durable and less likely to delaminate/split compared to stone from other suppliers. The precision of the cutting work is a key benefit for us and surpassed our expectations."

The bespoke cutting service available from Forest Pennant enabled them to supply over 50 linear metres of custom-made radial and transition kerbs, and they were also delighted to provide six seating blocks of solid Pennant stone which were then individually carved by skilled stone sculptor, Alyosha Moeran, with each block referencing local geography and history in some way.

"I liked the look of the stone immediately", said Alyosha. "The contrast of the blue and the green and the seams of a darker brown, for me, depicts the origin of the stone. It reminds you that the stone is quarried in a forest area and the stunning colours gives the square cut stones an organic feel."

"The stone is tight and carves evenly in all directions. It is hard without being brittle, and soft without being too open and crumbly. Carving this material was a pleasure as it will do pretty much what you ask of it, whether close detail or bolder forms. In my work at Crosskeys, I used contrasting textures to gain a sense of depth in the relief carving on the stone seats. I especially love the way the stone looks when wet."