This is the third and final page of a 3 page review of the External Works Exhibition held at the NEC, Birmingham in April 2007.

On to what I can only refer to as 'peripheral products', those systems, items, and ideas that are neither paving nor jointing, but do have a relevance for our industry.

I'll give pride of place to an exhibitor that only committed to the show at the eleventh hour, and invested a sizable chunk of his own money to do so. Regular site readers will be familiar with the support I've given to Richard Evans from Evans Innovations and his Pavers Marker over the last two or three years. He's a one-man band, working on site laying blocks and kerbs by day, while developing his innovations in what spare time he has. The Pavers marker is at long last attracting the level of attention and demand that it fully deserves, so it was gratifying to find that one of Richard's lesser known products, the EasyMan segmental manhole raising system was causing a bit of a stir amongst many of the Local Authority visitors.

EasyMan is self-explanatory: it locks together to create 50mm lifts for manhole ironwork, and each piece is well within the suggested load limits for manual handling. It's much, much quicker than regulating brickwork, cheaper too, and an idea whose time may just have come. I do hope so, because Richard and his missus have steadfastly persisted with this product when many lesser companies would have given up at the first hurdle.

Across from Richard, Probst Handling were showing off just a few of their extensive range of paving and heavy item handling tools. It's an awkward show for Probst, as most of the visitors are from the design and management end of the industry, rather than the hands-on supervisors and contractors that would more readily appreciate the benefits offered by well-designed and immaculately crafted specialist tools.

In an ideal world, this show would evolve to encompass tools, and many other products that are of interest to the wider hardscape industry, but for now, Probst are pretty much on their own, which has got to mean that the event isn't reaching its full potential. Yes: SED in a few weeks will provide plenty of opportunity for toolheads, but for a show that is intended to address all parts of the hard-landscaping industry, the coverage for tools and ancillary services is well below what it should be.

I started this review with comments on what is, undoubtedly, one of the “hot topics” within the paving industry at the moment: jointing and bedding mortars. Six companies representing this sector, and an enormous amount of interest. So why is it that another hot topic, that of pavement sealants, was so poorly represented? Granted, Instarmac had their new JointFix product on display, but other than that, just one product, that formed one element of a range of products being promoted by the effusive Russell Turner of RTS Products . 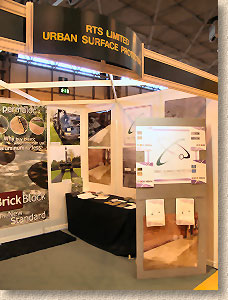 Russell has happened upon a product that he claims seals almost any surface and protects it from stains, form UV-fading, and will even resist adhesion from the dreaded chewing gum that blights so many of our public footpaths. Russell's been involved in a number of trials, and is now ready to put the product, which is sold under the name USP (Urban Surface Protection), out to the market. Treatment costs around a couple of quid per square metre, even less for larger areas, and early signs look promising. I'll be following this product with interest over the coming months to see whether it lives up to its potential.

Alongside the USP, Russell also has the aluminium edging system, the popular Permaloc grass/gravel matrix paving system, and a clever variation, Easy-Trac, which enables machinery to be travelled across gardens or grassed areas with minimal damage. Although the USP probably has more immediate appeal, and it certainly had Russell all of a lather, I suspect the Easy-Trac product has phenomenal potential as it's the sort of thing every contractor would want to have, once they've seen how bloody useful it can be.

Finally, a word for one of my favourite publications, Landscape and Amenity Update . There's a surfeit of 'product' magazines doing the rounds currently, with ever more introspective titles covering ever smaller niche markets, but LAPU, as it seems to be known, is a well-read all-rounder for the landscaping trade, both hard and soft. Kelly Jones, who I've been talking to for a good few years now, tells me that the publication, which has more of a glossy newspaper format rather than a magazine look, is to have a pedestrianisation/hard-landscaping feature in every issue from now on, and I'm hoping I can help with that in some way. On a personal note, congratulations to Kelly on her forthcoming nuptials – I hope EWx has left you with some energy and that you enjoy your honeymoon.

So, we come to conclusions: what was the overall feel for the show? Well, I think it would be fair to say that many exhibitors were unimpressed with visitor numbers, even though the quality of those few was superb – all heads of department, senior designers, planning chiefs and others with genuine spending power. Tuesday, the first day, was poorly attended, and a couple of exhibitors were very gloomy when I spoke to them that evening. Wednesday was better, but never really busy. Thursday was fine up until lunchtime, when the crowds disappeared and there was a reported sighting of tumbleweed down one of the aisles.

Why does EWx struggle to attract numbers? I think the focus of the show is somewhat loose: there's hard-landscaping, and there's street furniture and there's play equipment, and it's all a bit mixed up. The Circle feature in the centre was superb and, much like The Square from EWx05, it was highly regarded, fairly well implemented (despite some effing about with the layout that seriously upset a couple of the contributors) and a wonderful example of how to bring together products from a range of manufacturers in a realistic and thought-provoking way.

As for the skateboarders: why? I saw for myself the look on the faces of town centre managers as they saw the one group responsible for untold damage and public dissatisfaction with many of our urban spaces being given an arena to show off their vandalising routines. I'm aware that the intention was to show how, by catering to the skaters and providing them with a place of their own, the other areas within our town and city centres can be left intact and open to the enjoyment of all, but I'm not sure everyone else got that message.

The seminars were, by and large, fairly well attended, and obviously offer an added incentive to many visitors, but I'd like to see a wider range of topics up for discussion. Obviously, the organisers can only stage what they are offered by exhibitors, but there was a strong bias towards design and very little on construction and implementation. An award for having the most massive cojones at the show must go to David Burton of SteinTec for presenting his eminently listenable RIBA-approved segmental stone paving overview to an audience consisting solely of his competitors. Well done, David!

There was talk that the 2009 event might see all three events, EWx, Traffex and the Parking bods of Parkex, all jumbled together in the one show. I really don't like that idea. It would, obviously, defuse the dissatisfaction of the EWx exhibitors regarding visitor numbers, but it would dilute the impact of EWx and also that of the very successful Traffex. It would mean trudging even further around the halls of the NEC to find exhibitors of interest, and it would mean enduring a higher ratio of irrelevant stands. For me, this show needs its mission statement tightening-up, not loosening.

Also, the presence of another of the big paving manufacturers would be a huge help. Marshalls have their own strategy which probably rules them out, but if Brett or Cemex were to get their act together, then 2009 really could have a wider appeal. And more natural stone. And clay pavers, while I think of it!

The show needs to pull in more term contractors, more designers, and more landscape architects. It needs to offer them a real eye-opening, mind-expanding experience that renders them willing to leave their cushy offices. And it needs to offer something to the more general landscape contractor – in this format, it's too highly skewed towards the suits.

As the show drew to a close on Thursday afternoon, I conducted a very unrepresentative straw poll of exhibitors, posing the same two questions to a round dozen of them: was it worth coming, and would you book again for 2009? The results are very roughly 50/50, which really doesn't augur well.