FAQ - What's wrong with my tarmacadam?

Bitmac or tarmacadam that remains soft and sticky days or weeks after being laid is a regular source of concern for some readers of this website. This FAQ attempts to address the questions they most commonly raise.

Understanding why bitmac sometimes seems soft and/or tacky weeks, or even months, after being laid, requires some knowledge of the materials and methods used to surface smaller areas. Particularly imporatnt are two key properties of the bitmac itself, namely " Penetration Grade " and " Cutback ". These terms are defined on the Tarmacadam Basics page.

Larger drives, forecourts, car parks and roadways that require a bitmac surfacing will normally be machine-laid, as this has the advantage of being fast and accurate as long as there is a reasonable area to cover and adequate room to manoeuvre the Paver Machine . However, because of the relatively small size of a typical driveway, combined with the problems of access and the impracticality of transporting a Paver Machine to lay perhaps 30-50m², most residential bitmac projects in Britain and Ireland are hand-laid. The bitmac is delivered hot in an insulated wagon, and is spread and levelled as quickly as possible by operatives using hand tools before it cools too much and becomes difficult to work. 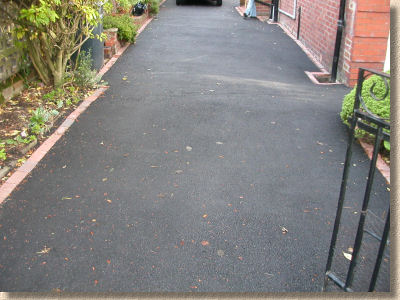 Accordingly, most driveway surfacing is done using a bitmac manufactured using a relatively high penetration grade binder (100-250 pen) that has also been cutback: most commonly, a medium cutback. This gives the operatives more time to spread and level a product that remains reasonably workable at lower temperatures.

Normally, the use of a medium-high pen grade, cutback bitumen would not present a problem to the driveway user, as long as a degree of care was taken over the first few days to ensure that vehicles with power-steering do not scuff the surface by turning 'on-the-spot'. Under normal circumstances, after 1-7 days, the cutback solvent will have evaporated and the surfacing will be 'hard' enough to withstand most normal residential traffic. However, there are times when it just doesn't work out that way, and the surface seems soft or tacky for weeks, even months after being laid. This can be for a number of reasons, the most commonly encountered ones being outlined below.

Identifying the precise reason why a bitmac surface has softened dramatically or has become tacky and pliable can be quite a complex process, involving checking back with delivery notes and batch-plant records and examining samples of the material in a laboratory. Whilst such a level of investigation may be justified on a large commercial project, it is often impractical for smaller driveways, as the investigation and assessment can often cost as much as, if not more than, the original work.

However, in the case of dispute, where no party is prepared to accept responsibility, it is often the lab results that identify the most likely culprit.

If a surfacing is still soft and/or tacky 3 days after being laid, then the contractor should be consulted. If there are no obvious reasons for why the surface has not set properly (such as it being a hot spell during summer), then a good contractor will be able to check with the bitmac suppliers about the grade and quality of the material supplied. In cases where an incorrect or unsatisfactory bitmac has been supplied, the contractor and the manufacturer will usually negotiate a solution that may involve removing and replacing the defective material or applying some other remedial measure, at no expense to the client.

Other remedial work may involve treating the surface with a Sealing Grit in an attempt to reduce tackiness, and to soak-up' the solvent to expedite its evaporation. Less commonly, the surface may be dusted with a black sand (sometimes referred to as a foundry sand) for the same reason. Whilst these remedial efforts may not always be 100% effective, they will not, normally, make the situation any worse, and can sometimes be satisfactory 'treatments' in cases where an elevated solvent content is the root cause of the problem.

In all cases, if a bitmac surfaced pavement is soft or tacky 72 hours after being compacted and finished, the contractor should be contacted immediately. As the supplier and installer, the contractor has to be given the opportunity to inspect and identify the problem, and then determine the most effective remedial action. In many cases, it is simply a matter of time, allowing an extra week or so for the solvent to evaporate and the material to harden more fully, but, in some cases, the material may need to be replaced. The responsibility for such works lies with the contractor, who may, in turn, seek redress from their supplier.

However, there are cases where the contractor refuses to accept any responsibilty or cannot be found for whatever reason. This presents a major problem to the property owner, as there is no effective avenue of redress without the contractor who supplied the materials. There is no point in carrying out expensive lab tests to prove that an unauthorised solvent was added to the material after it left the batch plant unless the resposnsible contractor is on hand to explain how this could have happened and to come up with a solution.

There is no simple treatment that can be applied to a soft bitmac surface to bring about rapid hardening. There is no magic jollop that can be sprayed or brushed on by the contractor or the bitmac supplier - it just does not work that way. The sealing grit or sand treatment will ameliorate the issue of a tacky surface, but it will not resolve the 'softness problem' completely. That can only come about by giving the solvent plenty of time to evaporate, or by replacing the problem material completely.

With all newly-surfaced bitmac driveways, the following will help protect the surface in the critical first two weeks…

Other Tarmacadam resources on this site...