Concrete flags or slabs were the mainstay of public footpaths and many a driveway for decades before being superseded by other materials, but they still have their uses, as will be explored on this page.

Flags: another example of regional terminology in the paving industry. These units are flat, rectangular blocks of pressed concrete, referred to as 'Flags' in northern England, in other parts they are known as 'slabs'. Both terms refer to exactly the same item, and the term 'flag' will be used in the remainder of this discussion. This page deals with those flags manufactured to BS EN 1339 sometimes lovingly referred to as 'Council Flags', the big, chunky boys of the paving units. The smaller, lighter patio and decorative flags are covered on the Patios page, while stone paving also has its own page.

A highly versatile, yet reasonably priced paving unit. Widely used for public footpaths, as well as for patios, drives and just about anywhere else a simple, reliable and effective pavement is required. The standard units are not designed to be particularly attractive, utilitarian is the best way to describe them, athough there are now textured, exposed aggregate and polished versions available, albeit at a premium.

They are manufactured by hydraulically pressing a damp high-strength concrete mixture into a mould. Excess water is forced out and the unit is then set aside to cure.

There is an extensive range of sizes available, and in recent years, enhanced concrete technology has made the production of 'small-element' paving possible (sometimes known as 'vehicle overrun paving'), which are, obviously, much smaller flags, e.g. 300x300mm, and are laid in a manner similar to block paving.

We believe this type of paving represents the future for commercial and civic paving, although the domestic market and the specifiers in their ivory towers will probably lag behind in its awareness and acceptance.

Letters A to G are used to indicate plan size followed by a number indicating flag thickness in mm
For example: a D50 is 50mm thick and 900x600mm in plan

As stated earlier, other sizes are available to order, as are 63mm or 70mm thick units that are ideal for driveways or projects where there may be vehicular use of the pavement. There are a number of manufacturers who offer a smaller 450x450x35mm flag/slab, which may be more suited to the DIYer, but is not as strong as the commonly available 50mm thick flags, and not suitable for driveway use, unless laid on a 100mm concrete bed.

The small element paving (Types E, F and G) is generally not stocked by Builders' Merchants but is available to order.

Along with the common, grey, 'pimple' face seen on most BS concrete flags, there is now a good range of alternative finishes and colours available to the specifier. These include polished surface, coarse textured, and exposed aggregate. Some products combine colour and finish, so it is possible to specify, say, a coarse textured flag in a buff colour, or an exposed aggregate in a red matrix colour.

With the pimple faced standard flags, there is usually a 'right way up', identified by the size of the pimples on the new units. The upper face, intended to be presented to the world, typically has finer, smaller, closer-set pimples, while those on the underside, the base, are coarser, cruder, and usually more widely spaced.

It might be expected that this glaringly-obvious visual clue would be sufficient to alert installers about which face should be laid upwards, but no. Almost every flag-paved street in the country features at least one flag laid upside-down....although the culprit is often a low-skilled utility company operative rather than a trained streetmason.

While there's nothing structurally wrong with laying these flags upside down (they just look 'weird'), it is a reliable indicator of the skill level on the installer, and if they have only a 50/50 chance of getting the flag the correct way up, what hope is there for the bedding, jointing and sub-layers?

There is also a choice of aggregate types with various coloured granites being a popular specification, but there are also flags with blue or green glass nodules as the exposed aggregate.

The above examples are really considered to be Special Paving and, as such, have their own page which looks at them and their applications in more detail. 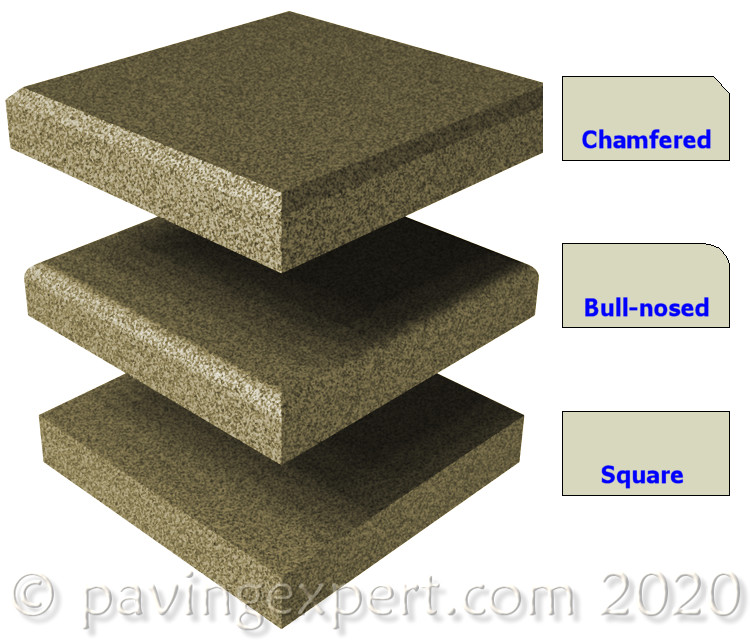 Some units, especially the small element units, are now manufactured with optional chamfered edges, more commonly seen on block paving. This reduces the incidence of spalling, especially on pavements subjected to vehicle overrun, but can be an impediment in areas frequented by shopping trolleys.

Contact the manufacturers listed on the links page for fuller details of each range.

Mixing with other paving types

There are a couple of ways to make this form of paving look slightly more glamorous. They are relatively easy to combine with paving bricks to create borders or panels of contrast (see drawings) and the various colours and textures can be mixed to create patterns. We find the reds and buffs to be the most useful: other colours tend to look wishy-washy after a few seasons out in the British or Irish climate, but please, please, please don't combine the reds with the buffs in a chequerboard pattern - it looks like a spilt bag of Dolly Mixtures!

The modular size of BS flags and blocks allows almost infinite design possibilities, a few of which are illustrated below . Designers and architects can play around with graph paper, drawing sheets or a CAD system to create layouts for any application. Some manufacturers supply CAD plug-ins that contain extensive and detailed libraries of their hard-landscaping products, which can be "drag'n'dropped" into site layout drawings as required.

A medium level of maintenance is required once this type of paving is laid. They need to be swept occasionally to remove dust and detritus.

Algal build-up is not usually a major problem, but any vegetation that does get a hold on the paving can removed by a pressure washer or, we are told, by swilling the area with a biocide to kill the algae, which can then be swept away after a short-ish period.

Mortar pointing is prone to cracking and colonisation by vegetation, but it can be cut out and re-pointed if required. Dry sand jointing needs to be topped up periodically. Increasingly on commercial projects, resin-based mortars are being used for jointing.

Reclaimed ("second-hand") flagstones are readily available from dealers, salvage yards, and, increasingly, garden centres. Highways gangs or paving contractors installing a new driveway are a good source of second-hand flags. They are usually delighted to off-load unwanted pavings, especially if you cross their palms with silver.

Expect to pay approx £1-£2 for a salvaged 900x600mm (still known as 3 by 2's in the trade!) These are ideal for those areas where aesthetics aren't critical, such as under sheds, dog runs, etc., or for other hard-landscaping projects, such as low retainers .

The basic techniques used to construct flag pavements are dealt with on the flag laying page.

However, it should be noted that the larger units (Types A, B, C and D) are normally laid individually, while the small element flags (Types E, F and G) are laid much like flexible block paving , on a screeded bed and then consolidated with a vibrating plate compactor. This is not a hard and fast rule: some larger units will be laid onto a screeded bed , although they will be consolidated with a pavior's maul rather than a plate compactor, and some small element paving will be laid on individually prepared beds.

Choice of bedding material varies from job to job; some contractors and specifiers prefer to lay the larger units (A,B,C,D) on a full bed of mortar, either pre-mixed paving mortar or a mixed-on-site 1:3 cement/coarse sand mortar. The small element paving is normally laid on a bed of a coarse Class M grit sand . Again, this is not a hard and fast rule; many jobs feature larger units laid on a full sand bed, and some jobs have the small element flags on a mortar bed. On pavements that may have to endure vehicular traffic, the flags are often laid directly onto a 100mm thick bed of mass concrete.

Spot bedding is not recommended for the reasons outlined on the Laying Flags page.

Also, sand or close-jointing works best with chamfered or rounded flags, as there is less chance of spalling. 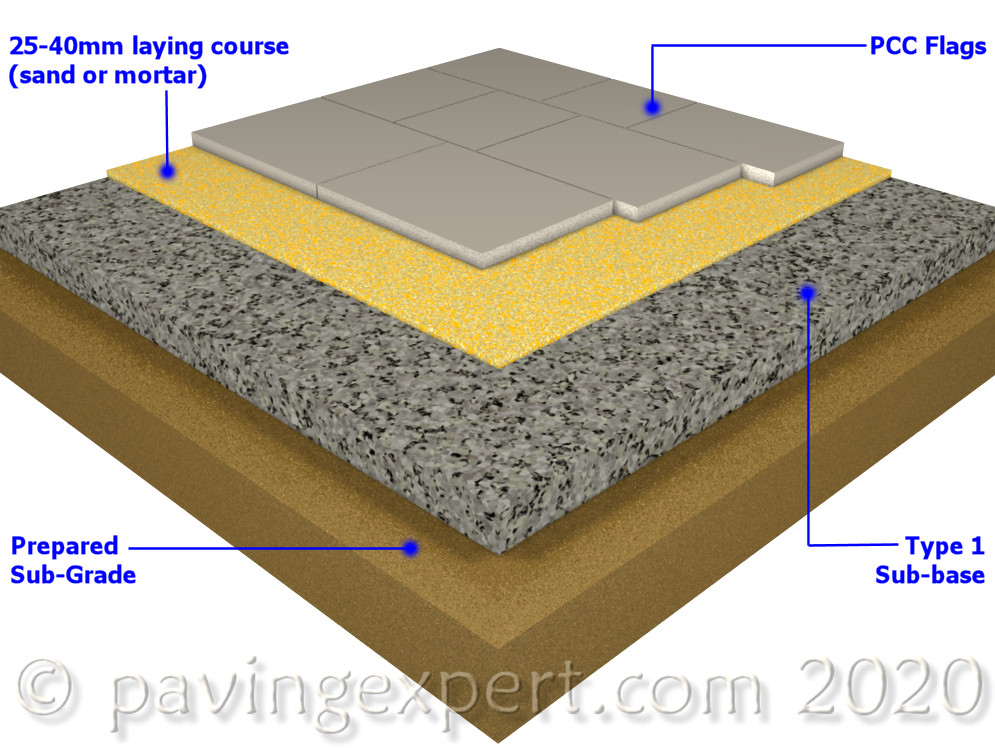 There are literally thousands of possible layouts and designs that can be acheived using the 7 basic BS sizes listed above, and many, many more when you add coloured flags or mix with other paving types, such as block pavers. The diagrams below illustrate just a few of the many........

Transverse paving with alternating courses of 900x600mm and 600x600mm units

Flagging around a radius [a curve or arc] invariably involves a deal of cutting to acheive the necessary turn in direction. The diagram opposite illustrates the two most common cutting patterns used to flag a radius; fan pattern and ring pattern. Generally speaking, 600x600mm units are used to flag radii, as their smaller size means more joints per square metre, which in turn allows the required degree of turn to be shared by a larger number of joints, ie, less turn per joint.

With the fan pattern, the 'origin' needs to be identified and both edges of the flag need to be trimmed to an angle that aligns with the origin. The ring pattern features longitudinal courses, often with just one edge trimmed.

The creation of both ring radii and fan radii have their own pages detailing cutting and layout procedure.

Patterns suitable for patios , incorporating coloured 600x600mm flags to break the monotony of grey/natural. Single coloured flags dotted within the body of the paving can help create interest in larger areas of paving. The worst possible patterning is the Dolly Mixture of red and buff chequerboard paving - avoid at all costs; this pattern can adversely affect the value of a property.

Mixing flags with block pavers is simple, cheap and highly effective for all sorts of projects. Both of the mixed layouts illustrated here are very popular for patios and residential paving, as the components work out at about half the cost of the more decorative patio flags, yet look most attractive when laid.

Coverage rates are very straightforward, as we are dealing with rectangles of regular dimensions. The following is a simple guide to the use of the 7 basic BS sizes.

Plain concrete flags are quite reasonably priced compared to the more decorative types of paving products, costing around 10-20% less per square metre than a typical multicolour rectangular concrete block paver .

For vehicular areas, the small element pavings are well worth considering as an addition or an alternative to concrete block paving, and are much more satisfactory than the larger elements.

Due to the exceptional variation in price throughout Britain and the limited availability in Ireland, the price guide for PCC Flags has had to be suspended.

It may return at a later date, but the use of 'averaged' prices has caused nothing but trouble with clients in that London clamouring to know where they can get flag paving at such a fantastically keen price, while contractors in the north have been panicking that they were under-pricing their own work.