Bang! And there goes the starting pistol for the annual mad rush to showcase new products for the coming season. First out of the blocks this time is Marshalls with their glossy brochurette of new flags, pavers and what is mysteriously referred to as "accessories".

Back in the olden days before the universe was screwed by its masters, new products used to be launched at Glee and we all got a chance to see them in the flesh (and in a very unflattering artificial sodium lighting) which allowed better judgement. Occasionally, a manufacturer will entice me down to somewhere at the back of beyond and give me an advance viewing of the new stuff, but mostly, I'm left to rely on marketing photies which, with the best will in the world, don't always give the full picture, for want of a better phrase. 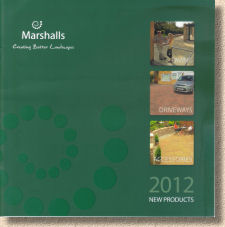 However, much of what is new from the Halifax stable is a re-working of old favourites, so it's possible, just about, to imagine what the new stuff actually looks like in reality. The best example of this would be the Fairstone® King Size Sawn Paving . Simple idea: find out which of the existing range of sawn pavings are most popular, and then get the processors out in India to make extra-big formats.

I like big paving. Big paving makes a statement. Big paving is impressive. Big paving is very 'on-trend' at the moment. And so Marshalls are offering three jumbo sizes; 750mm square, 750 x 1000mm and, mind your backs, a whopping 750 x 1250mm beast. Very helpfully, the accompanying text informs us that mechanically aided lifting will be required for these buggers. Really? No Sh…. Sherlock!

The blurb doesn't mention the weight, but at a typical density of 2.2 T/m³, that 750x1250mm ballbreaker would weigh-in at around 62kg, about the same as the old 5"x10" kerbs but in a much more cumbersome shape.

These are going to need very careful laying. I know from painful experience wrestling with the big old Yorkstone flags in Liverpool during my youth that it's very easy to think the huge flag is stable only for it to start rocking as soon as the Clerk of Works stands on it. And at only 30mm thick, exceptionally careful handling will be needed. Even the very best sandstone is remarkably fragile when it's that thin.

Incidentally, there's a new colour of Fairstone® for 2012. Caramel Cream Multi is a four-size pale sandstone with a shot-textured surface which is said to have a creamy base colour with golden tones. I'm not sure where the caramel comes in – maybe it's the brown veining? The text states that the stone is “carefully hand colour selected”, which is complete gobbledegook. Do they mean “selected for colour by hand”? Is there any other way?

Very pale, almost anaemic judging by the photie, which will definitely appeal to some, but it's one of those stones that I'd really need to see in the raw light of day before deciding whether it's to my liking.

Another so-called new-for-20122 product is 11m² Project Packs of popular Fairstone® flags, which, according to the blurb, has come about due to demand from contractors. Really? I know that some contractors like having complex decisions on sizes and numbers made for them, but the majority to whom I speak complain about the inherent wastage and design limitations of Project Packs, regardless of who provides them. Now, if they'd said that it was in response to demand from the profit-bleeding Builders' Merchant that run this industry, I would have no hesitation in believing it!

However, this is the way in which the trade works in the 21th Century, and so Project Packs it is. Whoop-de-doo!

Conversely (or is it perversely?), the very next page announces that the up-market Coach House cast paving is being made available in single sizes to complement the existing Project Pack…..due to popular demand! It appears that us Contractors don't really know what it is we want: we want it all, Project Packs and individual sizes. We're funny that way! 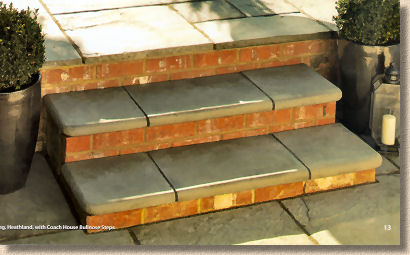 Anyway, not only will Coach House be available as singles, there is to be a circle format (2 ring, 3 ring and 2-ring square-off kit) as well as a lovely looking bull-nosed step unit in both corner and intermediate formats.

Looks very appealing…so why didn't they use it on the top step? Maybe they ran out?

And yet another old favourite is expanding its family. Tegula , the brand name that has become generic for tumbled pavers, is having a new biggie: a 240x240mm monster block which they claim will allow faster coverage but make no mention of aching wrists. They must weigh around 7 kilos apiece and it's not the sort of size you can span with one hand. I know it'll look great: I'm just grateful it won't be me laying it!

What is new is a block paver by the name of Elise .

It's a 300x150x50mm block with a sort-of rough-punched effect top surface (it's actually moulded, not punched). Love the plan size, less convinced by the texture. This is yet another block where, because of all the ups-and-downs, nobbles and bobble, the total surface area available to algae and lichens is actually greater than the plan size surface area, while the area in contact with soles or tyres is less. We've seen this sort of thing before and I expect a similar fate.

Overall, there are no great surprises on this menu. As I seem to have said time and time again over the last 3 years or so, this is not the right point in the hypothetical economic cycle to be running amok with innovation. In times of financial stress pain, we look for comfort and solace with the old familiars, and so augmenting the Fairstone® range and tinkering with Tegula&tm; is no great risk. The Coach House stuff, too, is not breaking any new ground but is leading a now-established brand along a well-worn route. I really like the big ball-breaking Fairstone® flags and I just hope enough contractors have the requisite cojones to have a go with them. The Jumbo Tegula is a no-brainer: how can it fail? The Elise…well, at least they had a go and in a couple of years, it will all be forgotten.