One type of decorative concrete that is seen more often than most others in Britain and Ireland is exposed aggregate concrete. A highly decorative and aesthetically appealling finish with limitless possibilities.

Exposed Aggregate Concrete is used as large bays for footpaths or low-speed traffic areas, as decorative vertical walls, and in dozens of different pre-cast units, ranging from block pavers, to decorative patio flags/slabs and to large pre-cast construction sections for multi-storey buildings.

The basic premise of an exposed aggregate concrete is that the brute strength of concrete is combined with the aesthetic appeal of a decorative aggregate and you have, hopefully, the ideal combination of looks, strength, mouldability and relative low production cost. The cost can be further controlled by limiting the use of the decorative aggregate, which is commonly the most expensive constituent of the concrete, to the top layer or face of the unit or structure.

There are two basic ways of constructing an exposed aggregate finish to a concrete; the first, Surface Dressing, acheives the effect by pressing the decorative aggregate into the body of the freshly poured concrete, whilst the second, Washed to Expose, which is preferred for heavy-duty or commercial use, is brought about by stripping away the matrix from the top 2-6mm of the concrete to reveal the constituent aggregate.

This method is used to keep costs to a minimum and is popular on smaller jobs such as garden paths and patios. Also, the skill level required is relatively low and it's the sort of job that can be handled by the keen DIYer. However, because the decorative aggregate is just the depth of a single layer of stones, any loose aggregate might be flicked out by wear or trafficking, revealing the plain, boring, bog-standard concrete beneath.

Construction follows the principles described on the Concrete Hardstanding page, in that a sub-base is prepared, a damp proof membrane laid and the concrete placed. The concrete, which is typically a C20-C35 mix depending on planned use, is tamped to a level approximately 4-9mm below finished paving level. This may be achieved with a hand tamp (ie, long, straight, plank of wood) a vibrating beam screed or a bug-roller as used for decorative and Pattern Imprinted concretes.

The amount of cleaning required will determine the best method. Where only a light cleaning of fat/matrix is necessary, it can be scrubbed off or rinsed off with water, but if there is extensive staining, treatment of the surface with a retarding agent may be a better option, as it allows the cleaning to be done a few hours later, when the concrete has cured somewhat and is holding the deco-agg securely enough to withstand a hose, a brush or even a power washer. Generally, a clean, angular gravel is preferred for this type of work. The size is usually in the range 6mm-25mm, and a single size is often used, although a graded size range, say 10-15mm may be used to achieve a particular look. The stone itself can be almost anything, but the most popular choices are richly coloured rock types, such as black basalts, red granites or white flint. There have even been experiments using tumbled, recycled coloured glass. 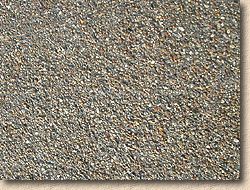 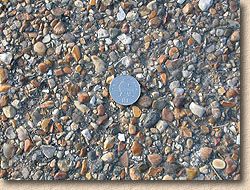 The photographs above show an exposed aggregate concrete that has been constructed using the surface dressing method, with a rounded 'golden' gravel, which is popular in SE Britain. The image on the left shows a typical view of the surface from eye-level, and, on the right, a close-up, using a 10p coin (25mm diameter) to indicate scale, showing the exposed gravel in greater detail.

Selected pebbles and larger flattish cobbles set into a reddy-brown mortar matrix were used to create the look of a dry river bed in the outback of Australia in a garden exhibited at the RHS Chelsea Flower Show in 2011 .

Using a coloured mortar over a standard concrete base as the 'background' for a surface dressed application opens limitless new possibilities in terms of design. 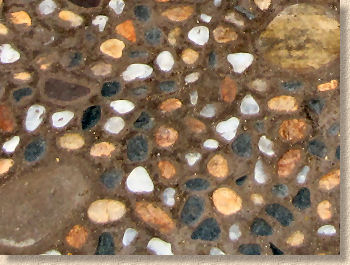 This second method of producing an exposed aggregate concrete is the more popular for heavy-duty applications. While the aggregate is usually held more firmly than with surface dressed types, the vast majority of what may be a relatively expensive aggregate never gets to see the light of day, as it is permanently encased within the body of concrete itself, and so, where expensive aggregates are required, they may be applied as a thin 'top coat' over a base of plain concrete or 'backing concrete' as it is known. This two layer construction is considered later in this section.

The decorative aggregate is incorporated as part of the coarse aggregate within the concrete mix. Again, many different deco-aggs may be used, chosen for their shape, their texture, their colour or a combination of these factors. In some exposed aggregate concretes, a particular blend of chosen aggregates will be used to create a particular effect. For example, one of the most popular exposed aggregate block pavers sold in Europe uses a blend of two parts 3-6mm red granite with one part 3-6mm black basalt.

The case study illustrated below follows the creation of an exposed slate aggregate concrete we've recently developed for a project in N.Wales. The concept was to create a natural looking pathway through an important tourist area, using local materials and local skills, that would provide easy access for wheelchairs and other disabled visitiors, and be capable of withstanding the annual flooding of the adjacent river.

The concrete was first developed and tested to allow us to see how the aggregate behaved during mixing, during transit to the site and during placement. Several trial batches were prepared to determine an aggregate grading envelope that provided us with a good selection of sizes but would not jam in the feed hopper or sink out of sight during placement. Once the grading envelope was determined, and colour choice finalised, a concrete mix was prepared to give a 28-day strength in the C30-C35 range. Test panels were prepared for the client to ensure the finished surface was suitable aesthetically, but also to determine the most appropriate placement method and to provide strength testing samples. 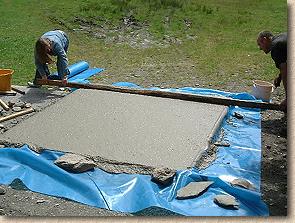 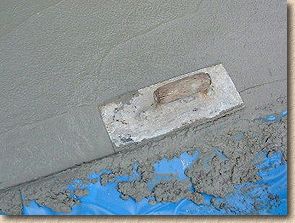 Firstly, the concrete is placed within the formwork. Note that a damp proof membrane is used between the sub-base and the concrete. This prevents the mix water being drained from the fresh concrete and helps ensure even curing of the slab. The plastic concrete is screeded and tamped to the required level. The edges are finished with an Arris Trowel to give a rounded edge and prevent spalling.

The concrete is then left for a period of 1-4 hours, until the bleed water has all but disappeared, and the surface is then sprayed with a retarding agent , in this case we used Sika Rugasol, at a rate of 250ml per square metre. The Retarder penetrates the top 3-6mm of the concrete and prevents the cement content setting, therefore it is essential that the application of the retarding liquid is even, otherwise the penetration will vary, resulting in a variable surface finish.

The slab is then covered with a temporary damp proof membrane to maintain humidity and left overnight or for a period of 12-18 hours. 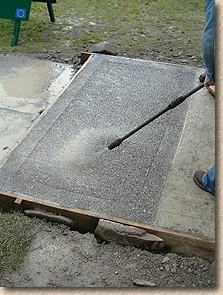 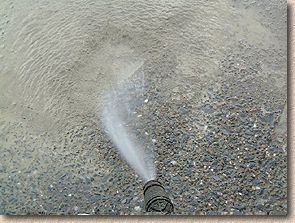 The following morning, a 100bar pressure washer is used to wash off the matrix from the surface of the slab. This could also be done using a stiff brush and a hose, but we found that the pressure washer was quicker and more thorough.

It is essential to remove all unset matrix, to fully expose the deco-aggregate. The material that is washed off contains cement powders, and so should be disposed of carefully. It will eventually set, so should not be allowed to settle onto other paving, which would result in permanent staining, nor should it be left to ssettle on bare earth, but should be collected up and disposed of properly. 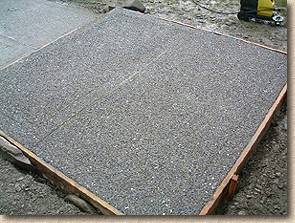 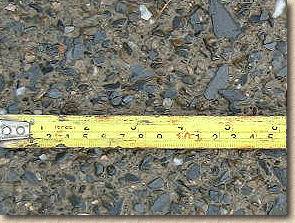 The slate has been exposed by removal of the top 3-5mm of matrix, but is still securely held within the body of the slab itself. The concrete will continue to cure in the usual way, and heavy traffic should be avoided for the first 5 days or so.

Once the actual construction started, the contractor was able to lay in excess of 100m of path, averaging 1.5m in width, per gang per day, which allowed a 2km path to be completed in around 4 weeks.

The matrix is a little bright, and if using this particular mix again, a darker paste would be designed, possibly using PFA (CEM IIB-V) or GGBS (CEM III), but the slate content has held up superbly well and is still providing a much-used, pedestrian and wheel-friendly surface despite all the weather North Wales and Snowdon can throw at it!

Further details on this project are available on request .

This procedure can be undertaken without the use of a retarder, although timing of the wash off then becomes more critical and the amount of skill required is considerably increased. The freshly placed concrete will need to be repeatedly hosed down and brushed off from approximately one hour after placement until such time as the desired effect is achieved. Obviously, the time span will depend very much on ambient temperature and atmospheric humidity, and this can lead to problems, particularly with concrete laid in the late afternoon when the wash-off process might not be completed before dark. Also, great care is needed to ensure that the amount of deco-agg that is removed is kept to a minimum, and only the matrix is washed off.

As mentioned above, where the deco-agg itself is expensive, it is possible to use a two-layer construction, placing a relatively thin layer of the deco-agg concrete on top of a cheaper backing concrete.

This two-layer construction is the basis of the Face Mix Blocks that are extremely popular in Ireland and continental Europe, and it has been combined with the 'wash-to-expose' methodology described above to enable the manufacture exposed aggregate block pavers , which bring all the aesthetic apeal of an exposed aggregate concrete in an easy-to-lay modular form.