This page gives an overview of the concept of gradient and how falls are used in the paving and drainage trades.

Most paving¹ and drainage relies on fall to carry away the water to somewhere less troublesome. Fall may also be referred to as slope or, more correctly, gradient. By making one part of the pavement or drainage pipe higher than another, gravity can be relied upon to persuade the water in a preferred direction.

But how much fall is enough? And can you have too much?

[1] The most obvious exceptions are permeable paving, where the water goes through the surface and into the ground, and some land drains which are laid flat and then rely on hydrostatic pressure to drive the water one way or the other.

The term 'fall' is often used in relation to paving and drainage, but it is sometimes further qualified by talking about endfall and crossfall.

This is also known more correctly as longitudinal fall and it describes the fall or gradient along the length of a pavement or surface.

Known more correctly as transverse fall, it describes the fall or gradient across the breadth of a pavement or surface.

On some pavements, notably those covering larger areas such as plazas and bigger car parks, it's not always possible to determine just which direction is endfall or which is crossfall. It may be that the project engineer has arbitrarily decided that one particular orientation is longitudinal and so is represented as endfall, and perpendicular to that will be the crossfall.

However, in such situations, it's often easier just to talk about "fall" full stop!

There needs to be some universally understood method for describing how much slope or fall there is on any given structure, such as a pavement or a pipe. The way this is achieved is by measuring how much that structure rises or falls over a specified distance.

As shown in the diagram below, it should be apparent that a pipe measuring 1m in length which is 100mm higher at one end than the other (blue) has more fall than a pipe with 50mm difference over the same distance (red), or a pipe that has that 100mm of difference over a 1.5m length (yellow).

This equation results in a dimensionless value or ratio that allows direct comparison between various slopes. In the examples used above...

These values are most commonly converted into percentages ....

.... but percentages can be hard, if not impossible, to visualise, so a more commonly encountered method of expression is as "1 in summat" ratios ...

Gradient ratios are dimensionless, so as long as the units of rise/fall and run are the same, the ratio holds true.

Converting between ratios and percentages

A gradient expressed as a percentage can be converted to a ratio by dividing 100 by the percentage value:

A gradient expressed as a ratio can be converted to a percentage by dividing 100 by the denominator of the ratio:

To determine the amount of fall (or rise) from a ratio:

A residential patio is to be built and it will drain towards the garden area. The patio will be 4.2m wide and fall for this project is required to be 1:60.

What is the level difference between the garden edge and where the paving meets the house?

A gradient of 1:60 means that there will be 1 unit of fall for every 60 units of patio width.

The patio is to be 4.2m wide, so if that distance (the run) is divided by 60, the result is the 1 unit of fall. We'll work in millimetres rather than metres...

So, there needs to be 70mm of fall across the patio.

A surface water pipe linking a road gully to a manhole is required to be laid at a gradient of 1:90

Calculate the amount of fall per metre. 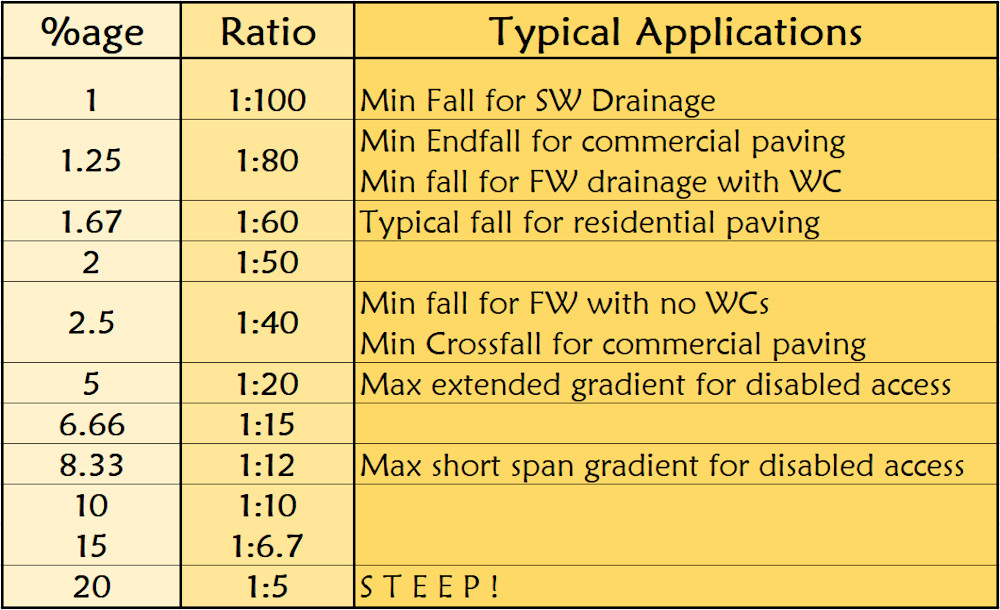