This year's London Stone Show saw a shift in timing as well as a change in venue. Previously held in late winter at Earl's Court, this show took place in early spring at the Wembley Exhibition Centre in north London. In theory, it should be easier for exhibitors and visitors to get to Wembley, which is just 10 minutes from the end of the M1, rather than have everyone traipse into central London.

In practice, the whole area around Wembley is utter chaos at the moment, with the building of the new stadium, and the map provided was less than clear. On top of that, I saw only one road sign directing traffic in the vaguely general direction of the exhibition halls, all of which combined to make locating the venue more difficult than it ought to have been. And then eight quid for parking? I only wanted to park-up the car for a couple of hours; for that sort of money I expected a service, a valeting, and a tank of fuel!

Anyway, into the show. For some reason, my pre-booked ticket never arrived, and despite emailing the organisers, I received neither ticket nor response, so I had to join a small queue and wait while my details were tapped into the central computer and my identity badge printed out. A minor inconvenience, I know, but annoying nonetheless, given all the mailings I've had and the time I spent filling-in the online registration form.

So, it's 10.30pm on Day 2 when I get into the hall, and from the front end, it looks pretty interesting. The hall is clean, spacious and well-lit; it doesn't look as ramshackle and neglected as Earl's Court; and there's a very attractive A4 glossy magazine-cum-show guide handed to you. I spot my first port of call – an Irish stone distributor located on the first row, and one I've not come across previously. Manor Stone operate out of Co Laois in the Irish midlands and were showing their walling stone, although they do have a 'crazy paving' style native Irish stone that I'll be investigating further over the next week or so. 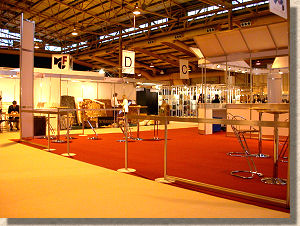 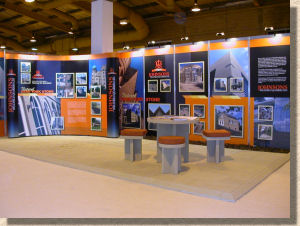 In fact, in the whole show I found only three stands exhibiting British or Irish stone: the aforementioned Manor Stone, Berwyn Slate from Llangollen, and Huddersfield's very own Johnsons Wellfield , although they didn't even have anyone manning (or womanning) their display. Loads of Italians marble, Indian sandstone, Turkish, Polish, Chinese, Brazilian … but next to buggerall from these islands. In all the years I've been attending this particular show, both in London and Dublin, this is the poorest turnout from our 'home teams'. Yes: there were other British/Irish based companies selling imported stone or tools, technology and other accessories, but no other home-grown stone.

There were some items of interest. I discovered Posh Floors Ltd , a London-based supplier of high quality mason's tools from Spain and a pretty impressive selection of cleaners, polishes and sealants, and in the second hall, was DO Stone , a company importing all sorts of stone products, but of most relevance to me, a BS Standard half-battered kerbs in a chunky, coarse-grained Polish granite. And then there was The Stone Theatre who had an imported limestone that is uncannily similar to Cotswold stone but much harder and less absorbent, making it more suitable for paving. They market it as "Cirencester Gold" 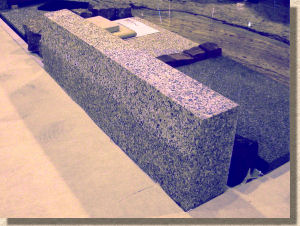 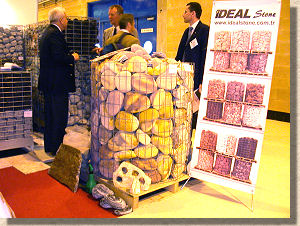 One stand that seemed to be attracting more than its fair share of attention was Ideal Stone and their amazing assortment of decorative aggregates from Izmir in Turkey. Spaghetti stone, lava, cobbles, boulders, pinks, greens, reds, oranges, stripes, spots, many that wouldn't look out of place in the latest episode of Dr Who. At least one major distributor was hovering around the stand like a bad smell for far longer than is healthy, which suggests it might turn out to be a good show for Ideal and their partners.

I had yet another go at investigating what sealants work best with various types of stone, and, as ever, each manufacturer/distributor swears blind that their own jollop is the best and the only one really suitable for sandstone, limestone, granite, etc. However, Dry Treat products from Australia, distributed in Britain by Leeds-based Naturelli, did seem to be more knowledgeable than most, and gave me a free sample (about half a test tube full, before you start thinking I blagged enough to treat my patio!) that I'll be playing with in the next week or so.

One nice touch was a sort of memorial garden to Derek Earl-Bicknell, MD of Pinks Hill Landscape Supplies in Guildford, who was tragically killed in an accident last summer. Derek was a big supporter of the London Stone Show over the past couple of years, and one of the real characters in the industry. Although he was an incredibly busy man, he always tried to find time to chat and he had an undeniable enthusiasm for stone and hard-landscaping products in general. Our industry is poorer without him. 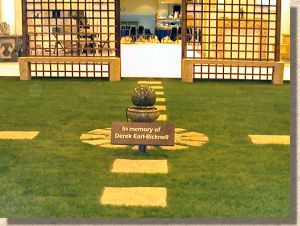 Speaking to a few of the exhibitors, there was some genuine concern about the low number of visitors. It wasn't exactly buzzing while I was there on Wednesday morning, and one stallholder told me they saw only 20 visitors on the Tuesday. A number of people told me the same tale about some mystery email that had been circulated informing potential visitors that the show had been cancelled, and that this accounted for the slack turnout. No-one had a copy of the email to show me, but claimed they had been told by “someone else”. I never received a copy of the email in my inbox – maybe it went the same way of my entry ticket – so I'm not sure if this has any basis in truth or is just a rumour. Maybe it picked up on Wednesday afternoon, or on Thursday: perhaps someone could let me know?

Too many exhibitors seemed to be resigned to another long, boring day. Too many were sat in chairs reading the newspaper or a paperback, and would forlornly glance up as people passed by before returning to the telly review and checking their watch to see just how much longer this day had to go. There really did seem to be far more exhibitors than visitors.

Overall, I was disappointed by this exhibition. I know my bias is towards paving and hard-landscaping, and there was a reasonable sprinkling of these products on show, but there was nothing that really caught the eye; nothing new, nothing exciting, nothing that made you want to seek further information. The lack of support from British and Irish quarries is seriously worrying and makes me question the worth of the show in future years. If floor tiles and worktops are your thing, then perhaps it's a really good show. Maybe architects and interior designers get something from it that I can't see, maybe these fancy polished marbles, travertines and granites get them all excited in the same way that a lovely piece of yorkstone does for me. I struggled to stretch my visit to just over a couple of hours and when you consider I travelled over 200 miles and spent a night in an overpriced London hotel, I have to wonder if it was a worthwhile exercise - I could have stayed at home and sorted out my overgrown flower beds.

There's a Scottish exhibition planned for late November, and a second Dublin show for February of next year. The 2006 London event is scheduled for early March. I'll have to think long and hard, and have a good gawp at the declared exhibitor list, before I decide whether I'll bother again.