Tactile' is the term given to paving units that bear a distinctive, raised surface profile to be detected by both sighted and visually impaired pedestrians. The most common example to be seen are the Tactile pavings used at pedestrian crossings. This page provides an overview of the various types in use.

Tactile refers to the sense of touch, and therefore tactile paving is paving that conveys information to users via that sense of touch. This is most commonly achieved by having a distinctive raised profile that can be detected by users, such as ‘ribs’ running across the paving, or ‘spots’ that create a bumpy surface.

Interestingly, one enquirer asked whether the thermoplastic ‘Rumble Strips’, used at the edge of major carriageways and motorways to alert vehicles they are straying onto the hard shoulder, could be considered to be Tactile Paving. These “bumpy white lines” certainly meet the above definition of tactiles, but, probably because they are not modular, and not laid as traditional paving, they are generally considered to lie outside the remit for tactile paving.

As the implementation of tactile paving has progressed, new forms have been made available. When they were first introduced, back in the 1980s, the only readily available form was the 450x450mm pre-cast concrete flag, but they are now available as clays pavers and natural stone, as well as in bespoke formats, such as the units with steel or brass 'blisters'. Further, many of the concrete flag forms, are now manufactured as 400x400mm units (F50s and F65s) rather than 450mm (E50 and E65) units. The units are generally laid in the same manner as standard pre-cast concrete flags or block pavers, although many are now being laid on a full concrete bed to ensure accidental trafficking by cars, vans and lorries doesn't result in expensive breakages.

The key element with tactile paving is that different surface profiles are intended to denote different hazards, and these are outlined below.

There are two types of Blister paving: the most common type features 6mm high 'blisters' in a square pattern and these are used to indicate pedestrian crossings with dropped kerbs. Normally, the red-coloured units are used with light-controlled crossings, and buff for those crossings with no traffic lights. However, when natural stone units are used, this colour-coding is disregarded.

The Offset Blister units are used to indicate the edge of the platform at Rail and Tram stations, also referred to as off-street applications. Note that the orientation of the offset blister units is critical - the rows of blisters MUST be parallel to the platform edge, and they are generally placed approximately 500mm back from the edge.

Hazard Warning units use continuous half-rods, raised 6mm higher than the surface of the paving, to denote a hazard, such as the top/bottom of a flight of steps. Again, the rods should be parallel to the edge of the hazard.

Cycleway paving uses continuous flat bars to indicate a cycle lane. The bars run parallel to the direction of travel so as not to impede cycles. Where a cycleway and a footpath are adjacent, these pavings may also be used for the pedestrian section, with the bars running transversely, and a demarcation strip between the two.

Directional or Guidance paving is used to indicate the safest direction of travel for the visually impaired. The raised flat bars have rounded ends.

Lozenge paving is used as a platform edge warning for on-street applications. As towns and cities rediscover the advantages of trams and Light Rail Transport (LRT), this type of paving will become more common.

Tactile paving can be found in more and more places on the streets of Britain and Ireland, in a seemingly bewildering array of layouts. We're not sure all the applications we've seen are strictly in accordance with the official guidance, but what follows is a general guide to possible uses, and is factually correct, to the best of our knowledge.

Tactile paving can be found in more and more places on the streets of Britain and Ireland, in a seemingly bewildering array of layouts. We're not sure all the applications we've seen are strictly in accordance with the official guidance, but what follows is a general guide to possible uses, and is factually correct, to the best of our knowledge. For controlled crossings, the blister paving should span the full width of the crossing, from the dropper kerb on the right-hand side, to the dropper on the left-hand side (or as near as dammit without needing to cut the units). This strip of blister paving is normally 800-1000mm wide. 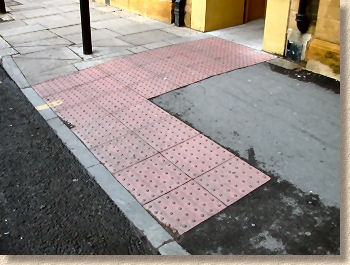 Where the footpath is wider than the 800-1000mm wide blister strip parallel to the roadway, two or three courses of the paving are extended to the back edge of the footpath so that the location of the crossing can be detected by all users.

For the concrete flag versions of the blister paving, the red, buff and 'Natural' grey are the three usual colours.

At the discretion of the local highways department, the guidance that recommends red units for light-controlled crossings and buff or grey for other crossing can sometimes be over-ruled when there would be an aesthetic clash of materials or colours.

With stone tactile paving, the blisters are normally milled to a circular shape to match those found with the concrete and clay equivalents, but such work can be expensive and so a number of suppliers offer a slightly cheaper 'square milled' profile, which meets the requirement of having the blisters at a specified separation, but the shape is different.

It is usually at the discretion of the local highways authority as to whether this profile is acceptable. Not all of them will be in favour.

The relatively high cost of having bespoke blister paving manufactured in a stone to match or complement other stone paving in the vicinity has resulted in some local authorities using metal 'studs' that are affixed to standard paving units. Some studs rely on drilling and gluing into position, while others use a high strength adhesive or epoxy resin to fix them into position.

The most commonly encountered metal studs tend to be stainless steel in the usual chromed steel colour or a bronzed effect. They are typically retro-fitted, once the paving is installed, and therefore almost any stone paving can now be used for crossing points as the stones ability to be milled to a blister profile is irrelevant.

A growing use for metal studs is as a deterrent against skateboards, micro-scoooters, heelies and other forms of wheel-based youthful exuberance.

Occasionally, studs will be set into low benches and planter walls, but by placing the studs into the pavement immediately adjacent to these tempting obstacles, the various bits of street hardscaping can be effectively protected with minimal impact on un-wheeled citizens.

The clay blister pavers offer great versatility. The most popular size measures 200x133x65mm with 6 blisters, although at least one manufacturer produces an 8-blister 200x100mm unit. There is a good range of complimentary units, such as half-blocks and they can all be laid in a range of patterns. Where there are abrupt or significant changes in surface levels, they offer all the flexibility of block pavers in being able to roll and fold, whereas the large concrete and stone units often need to be mitre cut , which isn't the prettiest of treatments.

These 'stick-on' tiles have been used in some of our towns and cities where retro-fitting of concrete, clay or stone tactile units to a crossing point is deemed impractical for whatever reason. Originally, they were often used as 'temporary' tactiles, on crossings where the local Highways Department hoped to effect a more permanent tactile pavement at some point in the future, but their performance has surpassed expectations and they are now commonly fitted as permanent fixtures. 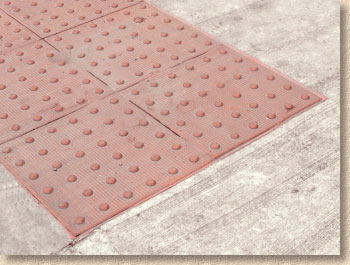 The correct name for these units is "Surface Mounted Tactile Paving", reflecting the fact that they are fixed (or "mounted") over an existing surface.

They are epoxy glued into place over the top of the existing paving, making installation simple, quick and cost effective, as it eliminates excavation and the footpath can be re-opened in as little as two hours.

Read a Pavingexpert.com product study following the installation of a surface mounted tactile crossing to a public footpath in Wigan, Lancashire.

Most of us wouldn't think to combine two different formats of a tactile, but it may have benefits.

On this crossing in Dublin, the bulk of the crossing has been paved with fairly standard pre-cast concrete red blister flags, but the ironwork access covers, and the unsightly concrete fillets surrounding them, have been covered with the 'surface mounted' versions to give a complete tactile surface. Clever, innit?!?!

Although there are clay paver units available for this type of tactile paving, they are rarely used, as the regular, standardised layout of rail station platforms makes the use of the 400x400mm or 450x450mm pre-cast concrete units much simpler.

The flags are normally laid 500mm or so back from the platform edge, and, as mentioned above, the rows of blisters should be parallel to the rail track.

This type of tactile paving is also known as Corduroy paving, and features a rounded or rod-like surface protrusion which distinguishes it from the flat, bar-like protrusions of the directional guidance paving. It is intended to be used as a hazard warning, most notably for flights of steps.

They are readily available in pre-cast concrete, in a range of colours as clay pavers, and in natural stone by special order.

Flat bars run longitudinally with the direction of travel. These units tend to be used in those projects where there is no kerb or other strong demarcation between a footpath and the cycleway. In many towns and cities where cycle lanes are delineated by means of a kerb or similar, the bicycle-only lanes are now being identified by using a red or green surface dressing or bitmac to give a strong visual indicator. 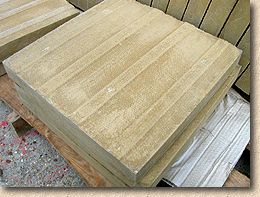 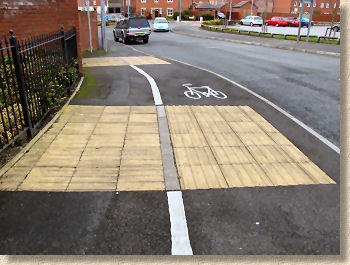 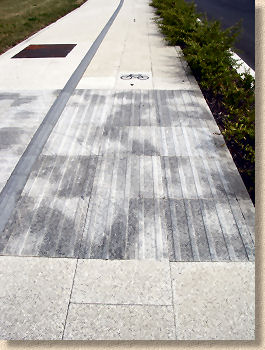 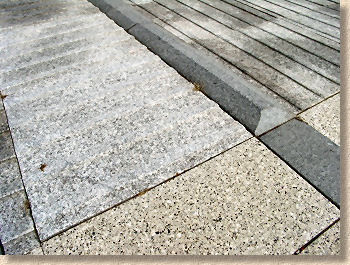 These two photographs show granite cycleway paving used on a retail park in Dublin. The dark markings are residual moisture that sometimes affect this type of imported granite, but are not structurally detrimental.

Note the central apex paver that offers gentle but definite separation between footway and cycleway, and, if you've really keen eyes, the inlaid cycle motif to the top end of the cycleway section.

This tactile paving is intended to act as a guide across large paved spaces, with the bars lying parallel to the direction of travel. Where a turn is encountered, the alignment of the paving should reflect the change of direction.

Pre-cast concrete and clay units are available from various manufacturers.

Used for rail, tram and, increasingly, bus stops in non-station applications, ie, on the open street.

With the expansion of tram networks along with on-going redevelopment of bus stops to make them more disabled-friendly, this type of paving is becoming more common.