Home / About Us / News / Tobermore Training for Streetworks Gangs

Last week saw Tobermore Concrete Products provide a 2 day training seminar for many of the streetworks gangs working for Limerick County Council in the west of Ireland. Using materials supplied by Tobermore, along with tools provided by Haven Engineering , the Probst Distributor for Ireland, and a program put together by the Pavingexpert website, gangs from Newcastle West, Kilmallock, Annacotty, and elsewhere in the county, were put through their paces over two days in separate 5 hour intensive sessions.

The sessions focussed on construction and reinstatement of modular pavements, particularly concrete block paving and small element flags, which are becoming more and more popular for town centre paving throughout Ireland. Tobermore have spent many years developing these pavings and are Ireland's premier manufacturer and distributor, supplying civil, commercial and residential projects throughout Ireland and Britain.

Tobermore Concrete provided the blocks, flags and kerbs required to construct a dedicated 'Training Pavement' under cover at the County Council's premises in Newcastle West. Measuring 4m x 4m, the Training Pavement would be taken apart and reconstructed by the gangs as the structure and reinstatement techniques were explained to them before giving them the chance of some hands-on practical experience. 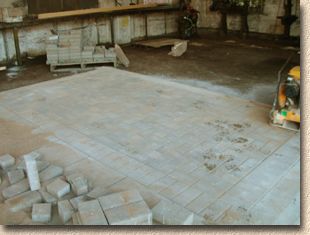 Each day saw 12-14 men brought in from their normal duties around the county, and, after a brief introduction, they were taken down to the Training Pavement, where the basic principles of block paving and small elements flags were explained, covering items such as the importance of firm restraining edges, the use of interlocking patterns, and the terms used to describe various parts of a typical pavement. 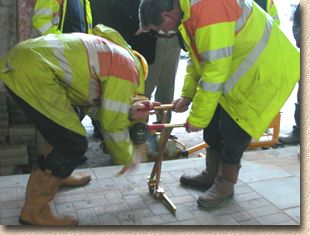 The first task was removal of a block paver. This was demonstrated using a variety of tools, ranging from the Probst Block Extraction Tool shown opposite, through to a pair of beefy old screwdrivers. Although the Tobermore Pedesta blocks (200x100x60mm in an attractive brown multi colour, if you're interested) had only been laid a couple of days previously, the gangs were impressed by just how much grip is generated by the jointing sand, and how difficult it can be to remove that first unit.

Using the Probst Block Extractor to remove that first block

Each gang had a go at removing one of the blocks using different techniques, and then the principles of removal, cleaning and stacking away from the working edge were explained. Specific attention was paid to the requirements of the recently published BS 7533:11 which covers suitable reinstatement techniques for modular pavements.

Once a section of paving had been lifted, the importance of the laying course material was stressed, with emphasis placed on the use of the right type of sand or crushed stone, and the absence of any cement in a flexible structure.

Lifting out the blocks 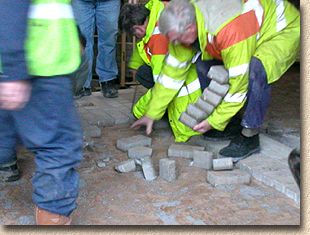 The deconstruction continued, with removal and disposal of the old (ish!) bedding, and then examination of the sub-base, including tips on how to identify problems. After a break for a swift cup of tea, the reinstatement started, with detailed instruction on backfilling in lifts, and compaction of the sub-base using a minimum number of passes of the compaction equipment - in this case a somewhat stubborn vibrating plate that was found to work better with the air filter removed. 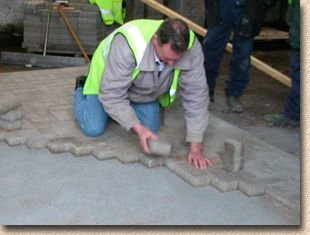 Once the sub-base had been re-graded and re-compacted, each gang was given the chance to prepare a screeded laying course of the bedding sand before being required to re-lay the blocks in sequential courses, with each man expected to re-lay at least one course.

This was the first time some of the gangs had worked with a herringbone pattern, which can confuse the best of us, especially on a Monday morning, but they all managed to pick up the correct orientation - eventually.

Re-laying blocks after preparing the screed

Finally, the gangs were shown how to mark blocks for cutting and then given a demonstration using the nifty Probst Block Splitter. Each man was required to mark and cut at least one block, and then fit it into the pavement, before final sanding of the joints and compaction returned the Trial Pavement to its previous condition. 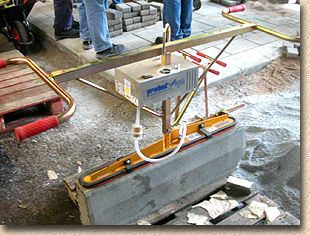 The gangs were also shown some of the specialist lifting equipment, including the handy little vacuum lift shown opposite, that will be used more and more in coming years as manual handling regulation are brought into force. This piece of kit can be carried around on the back of the wagon and brought out as needed. It comes with a selection of interchangeable plates that enable it to be used to lift kerbs (as shown) or flags up to 100kg in weight.

The afternoon session of the first day was directed at the Council's supervisory staff, and comprised a more technical, analytical presentation of why problems develop with paving, and how these can be identified, repaired and, most importantly, avoided in the first place. This involved looking at the correct structure of modular pavements, accompanied by an examination of failed pavements and the reasons why the failures occurred.

The afternoon of the second day was taken up with an on-site practical session that involved the repair of sections of footpath in the centre of Newcastle West. Since being paved using Tobermore Small Element flags (400x400x65mm) a couple of years ago, a number of areas developed problems that, upon examination by leading civil engineering specialists, were shown to result from faulty or inaccurate laying methods. The streetworks gangs responsible for West Limerick were shown how these sections could be lifted out using the Slab Handling tools, and then re-laid, once the sub-base had been re-graded and a new laying course prepared. 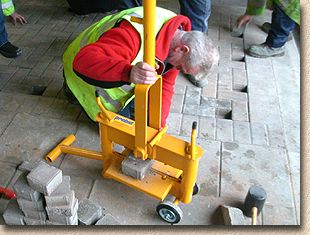 Head man at Limerick County Council, Mr Jimmy Condon, was delighted with the sessions, particularly the practical in the centre of Town, and believes the gangs were given a valuable insight into how these types of pavements are constructed, and how they can be repaired and maintained. He was particularly grateful to Tobermore Concrete for arranging the sessions, and to Haven for the loan of specialist tools that will make it so much easier for the streetworks gangs to maintain the paths and town centres of of County Limerick in tip-top condition.

Further details of the Tobermore Training Sessions for Streetworks Gangs, and how they can improve the performance and/or profitability of your organisation, are available on request. Email Tobermore for more information or call their office on 048 7964 2411 (028 7964 2411 in GB and NI)