Home / About Us / News / World of Paving

World of Pa v in g

It is with considerable regret that due to the unacceptable conduct and business practices of the event organiser, pavingexpert.com has withdrawn all support for the event currently referred to as " World of Paving " and " Hard Landscaping Show ".

I have spent the past six weeks trying to reach agreement with the organiser regarding their worrying attitude to exhibitors, the unannounced change of event ownership, and unpaid debts, but, true to form, the chief organiser has not had the basic courtesy to reply to my latest offer, dated 4th December 2010. Consequently, I can only assume that he is adopting the Ostrich approach to uncomfortable truths.

As owner and author of the pavingexpert.com website, I was asked to allow the original organisers to use the pavingexpert.com logo as a promotional aid, to promote discussion and write pieces about the event, to serve on a steering committee (which never, ever saw the light of day!), and to provide contact to potential exhibitors. I was to be reimbursed for my efforts, partly in cash but mostly by being given a stand at the event, free of charge.

It took a great deal of discussion to persuade me. I'm approached on a regular basis to lend my name and that of the website to all sorts of half-baked (and a few completely raw!) ideas, so this is not a horse I clambered onto without checking out the jockey, the trainer and the stable. I spoke to several business colleagues whom I trust implicitly and delved into the background of those involved. Eventually, despite some concerns, the presence of a reasonably sound financial backer and the desperate need within our industry for a well-run exhibition event persuaded me that it was possibly a horse worth backing.

Things went well at first. A pavingexpert blog was created to follow the development of the event, but suitable 'content' for the blog was rarely forthcoming, and by the end of June, it was apparent that communication was not a particular forte of the organisers, but it was early days and this was a event that was to be a marathon, not a sprint. 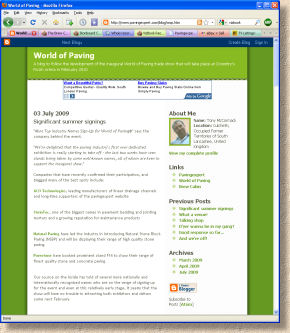 In fact, I heard nothing further from the organisers until 6th August when a PR email sent to their entire contact list informed that the date of the event had been changed from early February 2010 to late March. What happened to the "Steering Committee"? What happened to keeping 'key partners' in touch with developments? What happened to consultation with the trade?

There was still no personal contact from the organisers, though. No 'phone call to explain why they'd felt it necessary to change the date, and no explanation of why they had not kept me informed, even though I was supposed to be generating interest and discussion via the website and the now-dormant blog.

In fact, other than another overly optimistic PR email at the beginning of October reporting further event features of which I had not been made aware, I heard nothing at all from the organisers until a 'phone call with the sales guy in mid-October, just before I left for the block paving conference in Buenos Aires . Not the key organiser calling, note, but the bloke responsible for flogging exhibition space, the same bloke who had been the subject of several less-than-happy emails and 'phone calls to pavingexpert regarding overly-aggressive sales and outright lies. In particular, the basic faux pas of telling prospective exhibitors that such-and-such had already signed-up, an untruth which eventually prompted a widely-circulated email from a director of one of the industry's biggest companies making it clear that, contrary to what anyone might have heard or been told, neither his company nor any of its brands would be exhibiting at the event.

I enquired why no-one had contacted me personally since June, and why invoices for the previous seven months had not been settled. It was only then that it was revealed that the original organising company had baled out (they "did not consider it to be a goer" , in the words of the new chief organiser). The event had effectively been subject to a management buy-out and the terms of our agreement had, apparently, been changed. I recall commenting that I would be seeking further advice once I was back from Argentina.

It was early November before I was contacted by the new chief organiser, who attempted to win me around by telling of yet another "big name" on the verge of signing-up to exhibit, but who I knew (and have since had written confirmation) had no intention whatsoever of appearing at the event. I made plain that, unless outstanding bills were settled by the end of November, I could not continue to support the event nor could I allow my name and the pavingexpert.com brand to be used to promote the event, and I would need to make this clear to protect my brand. For this I was accused of threatening to create a “public slanging match”. It takes two to create a slanging match, and I had no intention of becoming involved.

There followed curt words and an offer to pay a small fraction of what was owed with some nebulous agreement to settle the balance after the show, but even with my limited business acumen, I could see that was a worthless gesture, so I countered with an offer that would allow the organiser to pay off what was owed over a three month period before the show.

That offer was sent to the organiser on December 4th, and, as stated at the beginning of this piece, the organiser has not even had the courtesy to respond.

And so, I have no choice but to sever my connection to the event. This is done with enormous reluctance, as I know that the industry needs an event to showcase all that is best in products, tools and techniques. However, in return, such an event needs an honest, dependable and communicative management team, which is absent in this case. Had I been the only party to be left disillusioned and disappointed by the organisation behind this event, it would be no big thing, but over the past 10 days, I've heard from other supporters and exhibitors who have similar concerns, a number of whom have also had no option but to withdraw their support.

What should have been a golden opportunity to promote our trade, at a time when we need a fillip more than at any other time in recent years, has now descended into a farrago of half-truths, doubts and debts.

Of course, what everyone wants to know is whether the event will actually go ahead.

I honestly don't know. I hope it does for the sake of all those exhibitors that have handed over money, and to those that did so on the strength of my involvement, I can only keep my fingers crossed. Unless the organiser settles what is owed and honours the agreement made back in January, then the event will receive no support and no further coverage from pavingexpert.com . To those exhibitors who had hoped to see their businesses promoted on this website as a consequence of exhibiting at the event, I can only apologise and suggest you address your concerns to the organiser....if you can get hold of him!