Home / About Us / News / A Brighter Barrow

The Marsh Street area of Barrow-in-Furness now has an imaginative and inter-active childrens' play area thanks to Steve Kyle of Capita Symonds and his use of SureSet's resin bound surfacing system.

Five terraced houses previously occupied the open site and local residents were consulted as to what future use they felt the area could be put to, unanimously supporting the need for a childrens' area. It would have been easy to just lay a traditional surfacing material but Landscape Architect Steve Kyle had a vision for the facility and approached local primary schools with a brief to design an area that would allow young children to play in a safe environment with a provision for their parents to sit and watch. The brief also stipulated no playground equipment was to be included, as it was thought this would be prone to vandalism and encourage older children to congregate. He was then able to develop those original ideas, via CAD, into an over all concept designed to encourage inter-active play.

Converting the design into reality led Steve Kyle to consider many options, including block paving that would be cut to produce the desired designs and coloured sea washed cobbles set in concrete but, having seen the detail that could be produced with the SureSet system, he decided to use the material for the entire surfacing. From the 1,000 plus SureSet formulations thirteen colours were selected, these being created from crushed glass, crushed rock, crushed marble, Black silica free slag and crushed granite. The system's use of crystal clear resin has also enhanced the raw materials, giving a colourful vibrancy to the whole area. SureSet being a resin bound system totally impregnating the complete depth of raw material and guaranteeing no loose surface also influenced its specification. 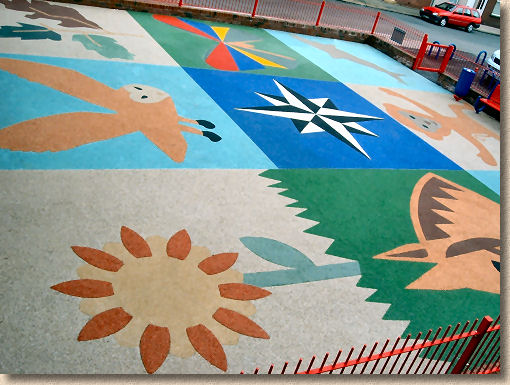 Both the Barrow Borough Council and residents alike have expressed pleasure with the outcome and Steve Kyle himself feels the project has been a great success, transforming a piece of wasteland into a public amenity. Apparently the local children find the designs exciting and stimulating and, when viewed from an adjacent bridge, those in the locality are seeing the project as a piece of public art.

The application possibilities for SureSet are endless but the system has already been used extensively for access roads and car parks, driveways, pedestrian areas, footpaths and cycleways, tree pits, patios and pool surrounds, in addition to the intricate demands of projects such as this at Barrow-in-Furness. SureSet believe the features their system offers are second to none and come with a guarantee recently extended to seven years for all materials. The company has also recently upgraded its corporate presentation and the new, distinctive 'winding path' logo will be playing an important role in all its future communications.