Home / About Us / News / Contractor's Evening at Tobermore

Over the past decade or so, Tobermore Concrete Products have built themselves an enviable reputation as one of the most progressive and enlightened manufacturers in the concrete paving industry. They've consistently striven to produce new and interesting blocks, flags and kerbs; they've aggressively pursued a manifesto of quality; and they've deliberately focused on looking after the contractors. After all, it's us lads out on the sites and driveways that often 'sell' the product to the client, so if we feel that we're being looked after by a particular manufacturer, we're more likely to want to work with that manufacturer's products.

Part of the culture of 'looking after' the contractors is the annual Layer's Evening and Barbecue. Existing and potential contractors are invited up to Tobermore HQ nestled at the foot of the Sperrin Mountains in Northern Ireland, and given a guided tour of the highly impressive (and recently extended) Paving Centre, and shown all the new products, along with innovative ideas for laying the old favourites. This is followed by a walkthrough of the main block-making plant, where the contractors are shown just how the blocks they spend most of their days laying are actually made in the latest, state-of-the-art custom-built plant. The evening is rounded off with a huge barbecue, a few words from Tobermore's MD, an impressive prize raffle and a rib-tickling stand-up spot from a top comedian.

To most of us contractors working the market on this side of the water, a manufacturer that feeds you with steak, shows you round their plant, talks to you like a human being and actually answers your questions rather than fob you off with waffle and techno-bollocks is something of a novelty, but it's an integral part of Tobermore's approach to doing business, and it doesn't half engender customer loyalty.

This year, for the first time, Tobermore decided to invite a chosen few contractors from mainland Britain, along with the webmaster of a certain website, and so GB Sales Manager, Mark Law, rounded them up, loaded them into a charabanc, drove them to Liverpool airport and joined them on the short flight westwards to Ulster.

It's surprising that so many contractors never take the opportunity to talk to each other. It's not easy when contractors are working the same patch: there's a degree of competition and rivalry that can turn any sensible conversation into a pissing competition, but when they come from a wider area, in this case, from the whole north-west of England, there's no shutting them up! Swapping tales of jobs done, problems solved, worst client ever endured, best site ever worked …. mix in a smidgen of footy, a dash of Ruggerby League, a couple of pints of Guinness and before you know it, you're there. 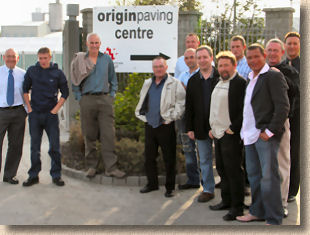 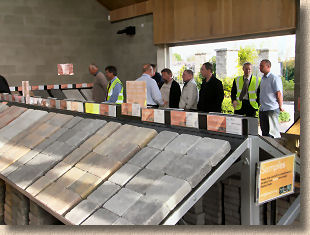 The Tobermore Paving Centres feature superbly-designed (and laid) areas of paving, with various products juxtaposed in all sorts of ways, along with under-cover sample areas where blocks are raised to hand-eye level for closer inspection, as well as the Design Offices where clients can chat to Tobermore's team of dedicated designers and have their project drawn out and quantified while they wait.

Unlike the display areas we normally see tucked into a dusty corner of the local Builders' Merchant yard, the paving displays at Tobermore Paving Centres are generous and meticulously maintained. There's loads of room to walk around, to acquire a true feeling for the paving, to see how 20 square metres actually looks, rather than trying to extrapolate 2m², and in natural daylight, rain or shine. It's by far the best way to choose paving and most of the Contractors were desperate for Tobermore to open their first Paving Centre in England (more news on this later this summer!) as they appreciate the ability to send potential clients to a professionally managed site where they can see dozens of different paving, walling and hard-landscaping options in one visit and not feel they are intruding on a previous clients' private patio or driveway. 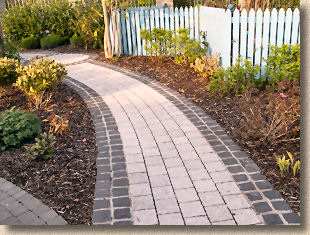 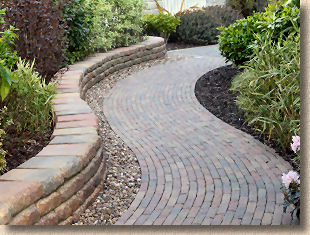 From the Paving Centre, Contractors are guided through the manufacturing plant to see for themselves how the blocks are made, how they're cured, how they're tumbled (if tumbled they be), packaged, stacked, loaded ... in fact the whole process from raw ingredients to finished blocks. The way in which the colours are blended within the blocks, the difference between face-mix and through-mix products, the enormous pressures used to compress the blocks, the constant quality monitoring, the near solid pressed concrete that's just a few seconds old - everything is explained to ensure the Contractors go away with a much better understanding of how paving is manufactured.

Before heading off to the barbecue marquee, a laying gang from Gibson Contractors demonstrated the machine-lay process using the Toberloc blocks. Most of the yards at Tobermore has been re-laid using concrete blocks over the past 12 months, and Fred Gibson and his team have been integrally involved in perfecting the machine-lay techniques. And just to round things off, Boland's had commandeered one part of the yard and were demonstrating various items from the Probst range of paving tools. All of us are familiar with block splitter and alignment bars (or we ought to be!) but not everyone has had a chance to see the vacuum lifting kit for flags and kerbs, and it certainly was attracting a lot of attention. 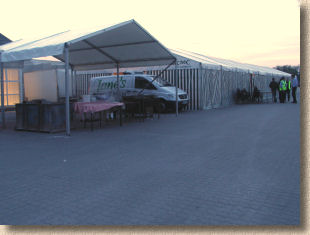 As evening closed in, everyone moved into the grand marquee to tuck into barbecued steak and sausages, not to mention beer and wine. Tobermore MD David Henderson said a few words, thanking everyone for turning up, and for supporting the company over the past year. He was pleased that increasing numbers of private and public customers are now more concerned with quality than with price, and this is good news for all of us in the industry. He also predicted increasing demand for machine-lay products and assured all present that Tobermore are 100% committed to supporting this exciting new opportunity. He was also pleased to show off a couple of new products which many present were seeing for the first time. The ever-popular Tegula blocks are now available in a new "Slate" colour blend (picture coming soon) and then there's the radical new "Arena" block, the like of which we've not seen before in these islands.

The raffle was drawn by some eejit by the name of Tony McCormack. First prize was a 28" (76cm in metric-ese) widescreen tellybox, with second and third prizes of a sumptuous dinner-a-deux at one of Norn Iron's top eateries and a portable tellybox. Although I managed to draw the ticket of the bloke sat next to me, I couldn't quite work it so that Yellow 44 won first prize.

Overall, this was a truly superb PR exercise which all the contractors appreciated. For many, it was their first visit to a block-making plant, and even the 'regulars' seemed to be having a fantastic time. Everyone left with the feeling that Tobermore is the sort of manufacturer with whom they want to do business, the sort of company that recognises the key role played by us contractors, the sort of company that teats us with the respect we've earned.

If you ever get the chance to attend one of these evenings - grab it with both hands. You will NOT be disappointed. If you would like to whisper sweet nothing's to Mark law and persuade him to add your name to the list for the next "do", call him on 07752 668365 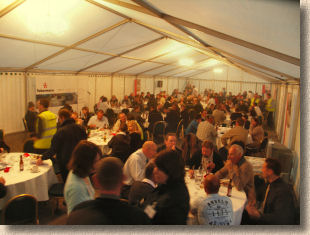