So disappointing on so many levels.

First of all, it's not actually a week. Three days have not been a week since I was at school in the 1970s and feeling aggrieved that the so-called grown-ups had a three day week while we students still had to put in a whole five days.

Then there's the sense of trying to be all things to all people.....well, all people other than those at the sharp end actually carrying out the physical tasks of construction. Not a lot here for anyone professing a trade: it's all white-collar idealism and sod all for the blue collar proletariat.....other than an opportunity to gawp at a few hand tools and the odd bit of plant. One exhibitor demonstrating an actual construction product told me two people turned up for the live demo, yet "seminars" about BIM or modelling systems were packed out with eager young things.

Unlike the sprawling EcoBuild , this event has at least made some effort at separating the various disciplines into some semblance of order, so we have Civils and Build , along with "Surfaces and Materials" (ie: laminates and worktops), "Smart Buildings" (fancy/expensive web-enabled methods to switch the lights on and off), "Timber", and so on.

Civils , while vaguely interesting, had nothing of real concern to the hard-landscaping trade, other than a fine, eye-catching demonstration of permeable or porous concrete from Cemex .

No-one from Cemex has spoken to me in many a year. It's as though they don't want anyone to know they still manufacture paving. They didn't even have a single block paver or flagstones on their display, but at least one Cemexian was aware of my website – they even used it to answer their own technical queries about paving.

This source gave a personal view that paving manufacture really wasn't a key mission for the company any longer, more a legacy with which they'd been lumbered and didn't really know what to do with it. Still, we managed an interesting discussion about the future of permeable and pervious materials, and their likely impact on hard-landscaping, so there must still be a flicker of interest within the company.

Build offered precious little more. If an alien came to the NEC to learn about the construction industry on planet Earth, they'd have no option but to assume the only material used for hard-landscaping was resin, in one form or another.

At least three resin-based surfacing companies, including brad leader SureSet , and one resin-mortar company, that also has a line in resin bound surfacing. No concrete, other than pre-bagged mortars, but definitely no blocks or flags; no clay, even though Birmingham is the traditional heart of the UK clay paver industry; no stone at all. Even the stand labelled in the floorplan as Derbyshire Aggregates had been re-assigned as a display of pan mixers.

Sureset and Resin Bonded Ltd. faced off against each other across a fire exit, both offering live displays of resin bound material being trowelled over a small, half-metre demo area, and while there was definite interest, I did wonder whether this was for personal projects or actual commercial projects. Elsewhere, The Resin Mill didn't even bother with a live demo, not that it seemed to make much difference.

Resiply are probably best known for their resin-based jointing mortars, although they do offer a resin bound system (ResiBind) and resin sealants (ResiSeal). 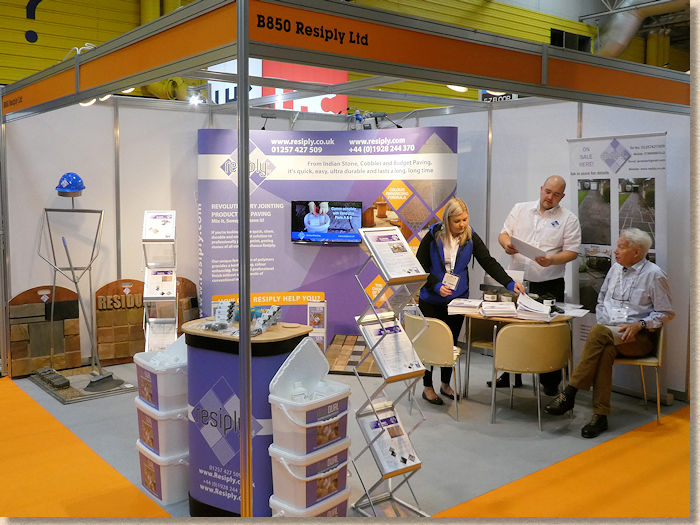 MD John Stafford was keenest to promote their two-part mortar, ResiDual, which he says is faring well in a rapidly expanding market, but he's playing around with other resin-based ideas, including a resin-bound recycled glass aggregate for porcelain paving. I do like to see innovation and it always encourages me when companies are willing to experiment, to push the boundaries, and to sometimes give us a glimpse of the future.

We may not be laying all paving on crushed glass in ten or twenty years time, but we will most likely be using it far more than we do at the moment, so there's no harm in seeing just what is possible.

And, sad to say, that is it. Nothing else of any real consequence. If it wasn't for the fact that a pre-booked train obliged me to aimlessly hang around until late afternoon, I could have seen all that was worth seeing in under an hour. Should I have come in the car so I could bugger off at a time of my choosing? The train cost significantly less than the combined cost of fuel, the M6 Toll and the daylight robbery of parking fees at the NEC (not to mention the epic trek they have now imposed on disabled visitors to get from the relocated Blue Badge car park to the actual exhibition halls), but even with the cut-price train fare, this has to go down as a wasted day and a wasted opportunity.

Practically nothing materially on show for the paving and hard-landscaping trades, and certainly nothing in amongst the dozens of seminars being staged at what seemed to be 10 metre intervals. No disrespect to those exhibitors mentioned, but not a single big name from our sector of the industry...and, to be honest, nothing to make them feel they missed out and should consider putting in an appearance next year.

The search for a worthy exposition of all that's best about paving, hard-landscaping, highways and groundworks continues. Some shows have come close, but too many fall well short.

Construction Weak might have been more appropriate, as far as I'm concerned.