Last year's SED was a bloody disaster, with more time spent in the queue to get into/out of the Corby show site than was actually spent visiting the exhibitors, and it was only a written assurance from the show organisers that they had resolved all the traffic issues that persuaded me to risk the three hour drive in the company of the son and heir. Thankfully, as we rolled up just before lunchtime, not a queue in sight and we sailed straight through to the car parking area.

My lad Tomás has been visiting these plant shows with me since he was in a pram, and he loves the big kit: the bigger the better. However, now that we're not actively involved in civil engineering contracting, the possibility of me buying a new digger or dumper is much diminished, much to his dismay. So, while he gazes wistfully at the tracked excavators and backhoe diggers, my attention is limited to the CBP machine lay demo put on by Steve Attfield and his team from Marshalls , and the new bits of pavers' kit from top tool suppliers, Probst UK .

I can't recall just how long it is that I've been promising to finish a page covering machine installation, but if someone told me it was three years, I wouldn't be shocked. It's on me “to do” list, along with 1002 other things, and it really should be pushed towards the top. As soon as I get half a day free….

Anyway, in previous years, various worthy contractors have partnered Marshalls in running the machine lay demo, but this year, they've gone it alone, and are relying on their own in-house machine-lay specialists to run the show. Particularly gratifying for me was the number of team members who had been on one of the HLTG training courses – it shows that the group is having a real impact on training, and it underlines the invaluable commitment the group receives from Marshalls. 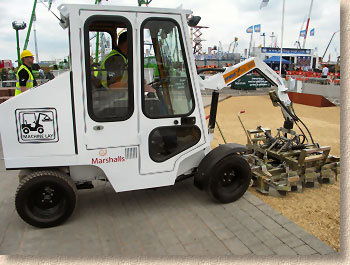 The big news for this year is that a partnership between Probst UK and Marshalls has now managed to move on to the next stage of machine lay: a genuine, coursed broken bond machine-layable format of the popular Tegula blocks that requires no manual intervention, and it's a damned clever solution they've come up with.

Basically, the problem is this: all machine-lay formats for CBPs involve the blocks being delivered to site as a palletised stack of rectangular shaped layers. However, for coursed broken bond, you CANNOT have continuous perpend joints – the continuous longitudinal joints are fine, but the perpend (vertical) joints can't be aligned otherwise you end up with discrete 'panels' of paving. What you need is staggered perpend joints, but if you have staggered perpend joints, how do you get the lifting head to safely and securely 'grab' the layers?

The answer is elegantly simple and effective, relying on adjustable offsetting spacers fitted to the two 'grabs' for the sides of the layer. These studs shove over the second and fourth courses by the required amount to establish a true broken bond. And to prove just how effective this new head can be, the Marshalls Machine Lay Team had put down a generous 100m² plus of the new format and it looks damned impressive. No straight perpend joints; excellent interlock of adjacent clusters; and the speed of installations we've come to expect from machine-lay.

Steve expressed a slight concern regarding the slightly-wider-than-average transverse joint between successive clusters, and promised this would be corrected in time, but, to be honest, it is a minor issue and one unlikely to cause loss of sleep on the type of job where machine-lay is currently used. In the medium term, when the industry is looking to push machine-lay into smaller and smaller jobs, this joint width issue would become more relevant, but by then the problem should be well and truly resolved. 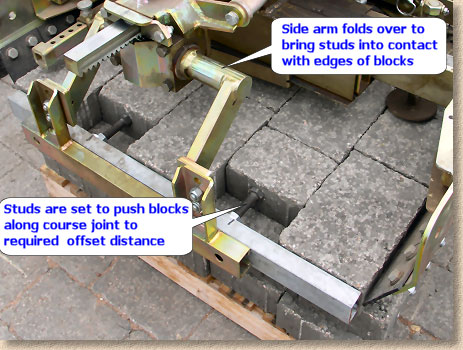 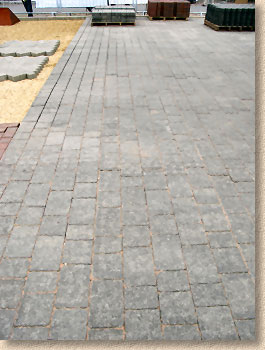 Just across from the machine-lay demonstration area, and contributing in no small way to its success, Probst UK were showing off a few new gadgets and gizmos aimed at making the life of your average paving contractor a little easier. As with all new tools for this ancient and noble trade, some are winners and some are funny-shaped bits of iron. Thankfully, Probst have a knack of producing more of the functional and fewer of the ferrous lumps.

So, first on parade, a new, enhanced block extractor. The existing block extractor is a much-loved tool amongst contractors as it enables easy removal of iffy blocks without the need to get down on ones hands and knees with a pair of screwdrivers. However, once the joints have been sanded, or on established paving, persuading the victim block to part company with its neighbours can be quite a challenge. The new version benefits from the provision of a detachable levering tool which can be quickly fitted and, with a bit of pressure from the operative's foot, gives added force to the removal operation. The lever attachment also incorporates a wire brush for cleaning jointing sand from the sides of removed blocks, and a spare set of blades for the extractor tool, which itself has been improved by the addition of a ratchet that enables the handles to be locked in place once a sturdy grip on the recalcitrant block has been established. 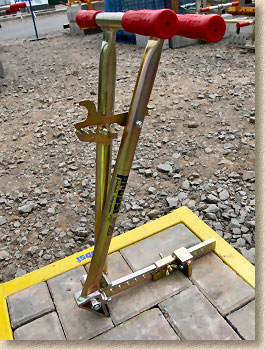 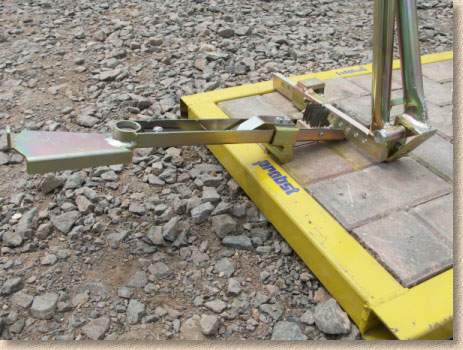 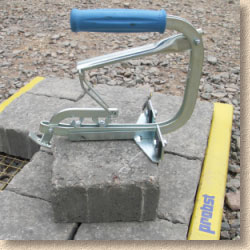 Next: a single block lifter/carrier. Dead simple, scissor-principle mechanism, and, as you'd expect from Probst, fully adjustable to suit a wide range of block sizes. There have been previous versions of single block lifter and I've never fully understood why you'd want a tool to carry one block that weighs a couple of three kilos. Fair enough if you've had a hard week and you're suffering with block-layers finger (where the skin at the tips of fingers has worn through), but for everyday use, a hand is far more versatile.

A tool that is genuinely useful, though, a vacuum-lifting tool for flags that doesn't rely on a pump or any other motorisation. This yoke looks not unlike a wheelbarrow tyre fastened onto the end of a crowbar. You position the 'tyre' over the flag to be lifted, stand on it so as to compress it, and when you step off, the 'tyre' expands and creates enough of a vacuum to allow it to lift a respectable 50kg (with the two-man version – the one-man jobby is rated for 25kg). And when the flag is in place, loosen the 'plug' to allow air back in to the vacuum, and away you go! As I said, no pump, no motor, no cables, nowt to go wrong: an elegantly simple, if unlikely-looking solution to the problem of lifting and placing individual flagstones. 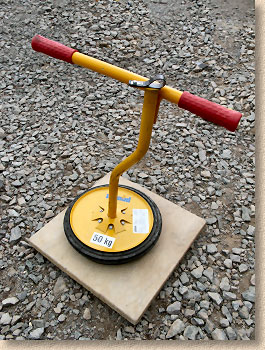 Another incredibly simple tool: the extended block alignment bar. With its extra long head, this useful tool can now be used to lever a whole series of blocks in one operation. This can only be used with coursed patterns, obviously, as it's far too big for the short joints created within, say, a herringbone pattern, for which the standard block alignment bar will remain the tool of choice. 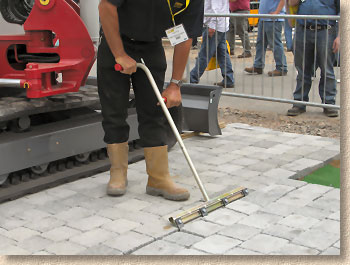 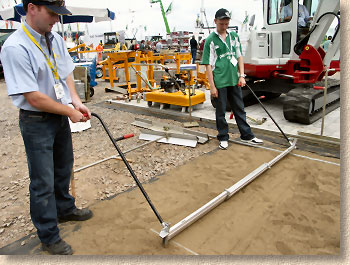 Finally, a new, two-man screeder, demonstrated here by Probst UK's Neil Jones (nearest camera) and my lad Tomás, making himself useful for once. Featuring fully manoeuvrable handles with two staggered grips, this telescopic screeder also incorporates a bubble vial to aid levelling, and, most importantly, allows the operatives to screed from an upright position, with straight backs, and knees well away from that damp sand. The specially-designed profile of the screeder ensures that it cuts into the laying course, and remains in contact with the screed rails, rather than riding up over the surplus bedding.

There were bits and pieces of interest elsewhere: at a show of this size, there's bound to be something to catch the eye. A number of companies were exhibiting kerb lifting kit of various forms, including a cab-operated hydraulic attachment for fitting to a standard backhoe excavator. One clever display featured a series of mini-conveyors circulating the same debris around and around a quite complex circuit and ably demonstrating the worth of these tools when working in awkward places.

Overall, the show was much better organised than last year. A well-considered entrance area and much, much better traffic management, but then, it would be virtually impossible to be as badly arranged as the 2006 fiasco. From a paving contractor's point of view, there's a reasonable number of relevant exhibitors, and if you're in the market for a new digger, then it's well worth a visit. The block laying demo is always a crowd-puller and it's good to see it developing year on year, rather than being the same old thing every time. I missed all of the seminars, which are a valuable addition to any event of this type, partly due to pressure of time but largely because the subject list just wasn't applicable to my interests.

2008? Yes: I'll probably be there, wallet and health permitting.