Is it me that's running behind or is the 2010 brochure from Natural Paving a late developer? This impressive-looking edition only landed on my desk last week, but June seems a funny owld time to be publishing a new catalogue. Then again, there's no date on the cover, just "thec ollection ", so maybe this is one of those multi-year publications that will be with us for more than a single season? 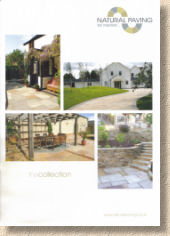 It has a look of permanence about it; 72 full-colour A4 pages including the semi-stiff front band rear cover, supplemented by a 4-page newssheet, an A5 tri-fold leaflet about "Stunning Driveways & Patios" which extols the manifold benefits of natural stone, and an A5 bi-fold paean to the new "Fired Earth" range of paving which is actually featured in the main brochure. I have to admit to not fully comprehending this Fired Earth link-up. The blurb goes on about products "d esigned and manufactured …. under licence from Fired Earth ". I thought they were summat to do with kitchens? I'm sure my upmarket sister was waffling on about having the kitchen in her new old house remodelled by Fired Earth. Or maybe it was remodelled using fired earth?

Anyway, I'll focus on the main brochure, as the supplements may not be standard issue to all and sundry.

The flagstones, which form the bulk of the Natural Paving collection, have been sub-divided into three gangs. There's premia stone, which is various sawn and calibrated offerings, and there's classic stone, which is riven with fettled edges in thicknesses ranging from 25-40mm (allegedly), and then there's fine stone, which is described as budget and comprises three different sandstones in four plan sizes and 15-22mm thinness. That all seems straightforward enough.

Ah, but, some of the premia stone flags are Fired Earth flavours, as are some of the natural stone block pavers, more of which will come later, but the classic stone and the fine stone are plain Natural Paving. Judging from the funny little circular swatch montage, there are a whole dozen different stones in the premia league, of which five are Fired Earth flavours, and consequently qualify as New Products.

The first of these is Jupiter Grey , a two-faced marble, if ever there was one. Monochrome tones of white, grey and black offer a honed finish on one face and a shot-textured finish on t'other, giving an extra design dimension by allowing both surfaces to be laid together to create contrasting textural detail. It's a lovely looking product, but marble in Britain and Ireland? It'll take some looking after.

Flamed Oak is described as an etched sandstone in shades of brownish magenta. The photie looks grey, but I'll put that down to the limitations of printing, as I know this stone, when viewed in real life, is more like pale aubergine, or, for those familar with the product, the more sombre Italian porphyry.

York Grey is neither: neither from Yorkshire nor grey. It does look like certain yorkstones and there is some grey amidst the buff, brown and iron tones. Maybe the predominant colour is grey – I haven't seen big enough areas of it to comment, to be honest.

Lunar is a sombre dark grey limestone that would probably work well in Ireland, where there's a tradition of using black and dark 'blue' limestones, and will be sure to find admirers amongst the designers of chic gardens in Britain. It needs a contrast stone, possibly a silver granite or light grey sandstone, to emphasise its intense brooding character.

Midnight is also a limestone, albeit of an indigo tone with a honed finish. Again, contrast is essential, as is careful consideration of the jointing. With all these dark stones, standard grey, pink or yellow mortar will look truly naff, so look at using close-jointing filled with black foundry sand, or maybe one of the basalt-based resin mortars.

Some of the remaining premia stone products are old friends, but the Lava granite is new, a veiny, mid-grey with a slightly textured surface for added traction and colour enhancement. Two new slates, in Copper and Black (dark grey in reality), both only available in three sizes (no 750x500mm biggies), and two totally unnecessary travertines, Oyster , which is an inoffensive mish-mash of greys, and Cream , which isn't.

classic stone flags come in four sizes: 290x290, 290x600, 600x600 and 600x900mm, and while there are no new products, per se, there is a new option, which is that many of the more popular stone types are now available in the 8-and-a-bit m² Mini Project Packs, slightly more than half of the standard 15.25m² project packs, although individual flagstones are available in many products.

The Weathered Lakeland is particularly attractive to my eye. The secondary brushing applied to the flags after cutting helps soften and age the stone, giving it a real country cottage look. For those who like a more contemporary feel, consider the striking Steel Blue limestone. It comes in the 250mm modular sizes, but the availability of four sizes allows reasonable random layouts to be created, if desired, or stick with the chic style and lay it in gauged transverse courses. This is a great stone that requires minimal maintenance compared to some of the imported sandstones.

The remaining classic stone products are just what the name suggests. So, there are some very familar Indian sandstones given original names, one of the better Indian limestones, and the desirable but unreliable Chinese black limestone. This is the stone that is jet black when it's bought but then fades to gunmetal grey after a month in the sun, leading to more than a few unhappy customers, so it's good to see Natural Paving alerting potential buyers to this problem and suggesting a 'fix'.

Fine stone, the budget brand, offers just three flagstones, and only one of them is new: the Lakeland , which is simply an unbrushed, thinner version of the stone discussed above. However, the lack of secondary brushing leaves the flags with distinct ridges and keen edges. It's nice, but not as nice as the brushed stuff.

There are the usual circles, octagons and diamonds that we've come to expect from Natural Paving , and while it would be easy to think there is nothing really special about these "special features", it's worth noting that the Natural Paving kits include up to six rings, allowing circles with a whopping diameter of 5.5m to be created.

So: on to the block paving. This is where Natural Paving stole a lead on virtually every other manufacturer/importer a few years back, and it's still a top seller for them. All the old favourites are still there, but they have been joined by two upstarts from the Fired Earth stable: the Flamed Oak sandstone (remember the browny magenta-ey auberginey porphyritic option from the premia leaguer flagstones above?) and the multi-grey texture Lunar limestone, which also made its debut in the posh stuff. I haven't seen either of these laid as block pavers, so I'll reserve comment until I do, but the publicity photies of the Flamed Oak looks most attractive while the Lunar looks....well, let's wait until I've actually seen it, eh?

The kerbs and edgings in natural stone are the perfect adjunct to any flagstone patio or block driveway. I love the little round-top edging kerbs and I just wish they'd offer a smaller bull-nosed or splayed kerb for driveways. A 100mm or more of half-battered profile can be a bit “industrial” for some palates.

OK: whinge time. I mentioned this when reviewing the 2009 brochure, but the message must have missed its mark. Those small stone pavers shown on page 56 are NOT cobbles. Cobbles are lumps of rock, between 50mm and 150mm in size, that have been rounded by water action, in a river or on a beach. Those pavers with fettled edges and a riven upper surface shown in the photies are setts. I know the numpties call them cobbles, but there's no need to encourage them in their misconception. They'll be referring to lamb chops as "cutlets"next!

Rounding up the product lines, a couple of concessions to reality. Concrete paving might have seemed Jurassic to some suppliers during the heady days before the banks made off with everyone's money, but all the top distributors of paving and hard landscaping have known that you have to offer customers a full menu or they'll shop elsewhere. And so Natural Paving are offering a limited selection of both concrete blocks and wet-cast flags. The blocks, to be brutally honest, are nowt special – a three-size distressed block in five colour blends – but they plug a hole in the product list. In contrast, the wet cast flags are amongst the best in the country, if not the whole world. Bought in from Westminster Stone , it's a symbiotic relationship, giving Westminster a broader market for their superb reproduction flagstones while allowing Natural Paving to tick yet another box on the list.

Now all they need is a nice clay paver.

So: what's the overall impression? It's a professional standard publication that looks and feels right. On balance, I would say it's an improvement on the previous edition, which in itself wasn't a bad effort, so the general direction is spot on. Some of the photos are not quite right, either in composition, in staging or in quality of installation, but, to be fair, I've seen worse in brochures from much bigger companies. There aren't enough provocative images, the sort of photos that make a designer or a customer think "Oooh, I'm nicking that idea!"

The text is spare, probably too spare. There's a delicate balance to be found between filling a page with meaningless marketing bollockese and giving just name, rank and serial number. There's no doubt that photos sell a product, but a well-constructed descriptive sentence or two can inspire confidence in the customer and convince them their choice is correct.

There are a lot of good products in here, so it's definitely a catalogue worth getting hold of, but it's more a photographic parade of products than a source of inspiration.