Following last year's re-start for the Brett Approved Installer Conference and Awards, the management, very wisely, decided to once again rely on the pretty damned impressive facilities and convenient location offered by The Belfry Hotel and Golfist Centre in Sutton Coldfield, between Birmingham and Coventry. Despite all the eejits in wear-them-for-a-bet trousers toting duffel bags on wheels full of golf bats with silly hats, this is a great location. Easy to get to, great meeting room for the conference and the big dinner, plus a more than adequate side room for a pre-conference display of interesting goodies from various suppliers to the paving trade. And then the rooms: alright, I've only seen two of them, last year and this, but they are a cut above your typical Hotel-Motel-Holiday Inn. How can you top that? Well, by doing a stonking breakfast the next morning is how. I may not need to eat again until around Thursday.

Brett Approved Installers (BAI) as a scheme has been completely re-vamped since Captain Calvin Jackson took charge, and the changes he threatened at last year's bash were duly delivered and genuinely have made significant improvements to the membership, which now lies close on 160 individual contractors. 2013 proved to be an eventful year for both the company and the scheme, with a far better than expected upturn in sales volumes. I don't want to betray any commercial confidences here but the figures are at least three times what I would have expected, and that's in a year when the economic recovery hadn't fully taken hold. What does all this augur for 2014?

Before the Conference there's ample opportunity to look at what's new from Brett Paving for 2014 and peruse the 'market stalls' of the support acts, well-known companies such as Pulvex diamond blades, Probst Handling and Resiblock sealants, along with some that might be less familiar. I'm not going to say much about the new products because they will be covered in the brochure review in a couple or three weeks, but the key theme is a total re-vamp of the natural stone offering. There was also a sneak preview of products that might, at some point, see the light of day but for now, are out for comment and feedback.

Anyway, the grandly titled 'Conference' kicked off a little late, but that's not a problem. Such is the desire for the delegates, all of them contractors, to meet up with old friends, have the craic, spin bullshit about their phenomenal success and generally wind up each other in a friendly manner, that there's a sense of reluctance to be shepherded into the meeting hall, to take their seats, STFU and listen to opening comments from Brett Head Honcho, Alan Smith, who gave a rosier-than-a-bouquet-of-flowers assessment of the wider paving industry in 2013, slipping into his usual easy-going, matey style. He really is quite relaxed speaking to contractors, which is not something which can be said about all MDs, and it plays well to this audience.

Calvin Jackson takes the reins to 'drill down', as they say on Dragons Den, into the detail of what has happened, what trends have been perceived and what Brett will be doing for the Approved Installers for 2014. There are no major changes planned, but very interesting examples of just what can be achieved by using the accumulated 'Reward Points' earned from sales will, hopefully, have opened a few eyes to the possibilities of an incredibly flexible scheme. 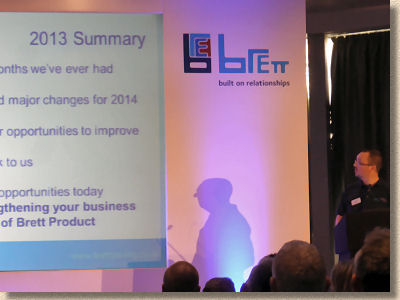 I know Calvin will want me to mention what he regards as the major improvement to the BAI scheme for the coming year and that's the gradual transition from paperwork and forms to online recording for all projects, allowing members to create a web-based profile which will not only simplify their admin, but also give them an invaluable profile on the Brett site which can be searched and checked by potential customers. Opportunities to portfolio jobs, to advertise specialist skills, to demonstrate qualifications, to show off awards, all this comes as part of the BAI package.

However, I really do wish it was a 'conference' where contractors conferred openly with their supplier, but as is the British tradition, when the opportunity to raise questions is thrown open to the floor, everyone mumbles and stares at their shoes. Oh, there're plenty of questions when it's one-on-one, but deafening silence when there's a chance for all to participate. Maybe planted questions or discussion points with clued-up speakers are required. I'd have loved to have heard someone lead a discussion on why, say, permeable paving isn't selling as widely as it should, or what jointing options are available for natural stone paving. The opportunity to educate and entertain at these events should not be overlooked.

Anyway, the 'conference' draws to close, there's a mass charge for the doors to grab a goodie bag, a box or three of brochures, even a crafty fag, and then back to the hotel rooms to change out of the de rigeur jeans and a hoodie into 'Smart Casual' for the evening dinner and awards.

There's a bit of a gallop through the awards, each of which is given out by one of the Support Acts from the afternoon display, interspersed with blasts of incredibly loud party music. I decided to try out my newly discovered ability to use twitter without making a twit of myself, and tweeted the results live as they were announced. I've had some great feedback about this, but I must admit that it felt terribly ignorant to my dinner companions, as they clapped and cheered each award as I sat tapping my phone like a demented teenager playing Flappy Bird. I apologise if anyone thought I was being rude: I hadn't realised just how difficult it is to tweet on a tiny phone in the dark using pudgy flagger's fingers when you've three pints of ale swilling about inside you!

So, the awards, in the order in which they were announced:

for assistance in the development on the new Natural Stone Range:

Sorry, couldn't get the names down before the event moved on. As soon as I have them confirmed by Brett HQ, I'll update this bit.

for leads generated from a single entertainment event:

for customer service on a community project

Regional Installer of the Year (South-West)

Regional Installer of the Year (North)

National Installer of the Year

Cue much merry-making and stuffing of faces and imbibing of plentiful alcoholic drinks from the free bar and then, all of a sudden, Brett's Business Advisor for SE England, the ever-affable Jon Matthias leaps on stage to auction his much loved Morris Dancing hat (who knew?) As should only be expected from some of the best contractors in the nation, there was serious bragging rights at stake, and bids soon reached a staggering 700 quid. I thought it was John McGinlay from a triumphant Paramount Paving who had made the winning bid, but checking with Jon the next morning, he revealed a truly staggering 1,200 quid had been raised for the nominated charity, Macmillan Cancer Support, mainly by contractors chucking-in together and matching each other's bids. Fantastic!

I had the opportunity to speak to a handful of contractors who didn't win awards and with no sense of jealousy or resentment, the fact that many of the prize winning jobs are projects with generous budgets in affluent areas was raised, while many contractors do highly skilled work on exceedingly tight budgets in less photogenic parts of the country and so may be at a disadvantage when it comes to recognition. It's human nature: we see a beautifully sweeping curve of a driveway leading up to a stockbroker house in the home counties with mature trees and manicured-to-the-millimetre shrubbery edging lush green swards of a lawn and the jaw drops, and then we see a meticulously detailed rectangle squeezed in at the back of a 2-up-2-down, with next-door's fence built from salvaged pallets, and we assume it's nowhere near as good a job. Is that fair? 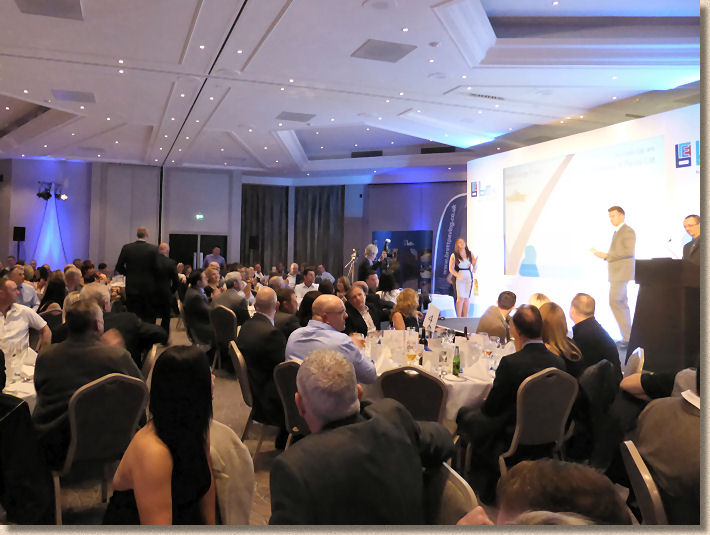 Maybe we need a budget specific award, a prize for best project costing, say, under 5 grand or under 10 grand. These jobs are out there. I regularly see them for myself, driveways big enough for just a single car, patios eking out an existence in a postage stamp back yard, but the detail, the passion, the thought, the design that has gone into such a project can be immense. Oh, we'd all love to work on 50 grand jobs, but sometimes, the best work, the craftsmanship that really deserves the plaudits, takes place on those little, local jobs that hardly anyone notices.

If it was only the money raised for charity, this would have been a great night out, but I get the sense that the contractors attend, year after year, because it has become such a buzzing event and a real atmosphere of co-operation and congratulation. It promotes all that's best in the residential paving trade, and for that reason alone, I will continue to support it however I can. 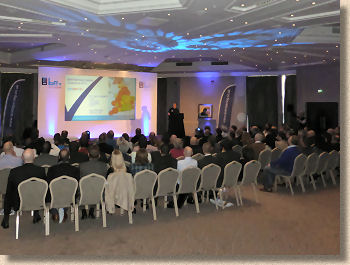