While most of this site deals with standard paving types, there are some highly decorative forms of paving that are really only suitable for use in the garden. Some of these are considered on this page.

Timber is a natural material and is a popular choice for all sorts of garden construction. It's easy to work, it's relatively cheap and it's incredibly versatile, but it has one major drawback when used for a paving or surfacing in these soggy islands - it's bloody treacherous when wet. Timber and a cool, damp climate combine to make a perfect home for algae and mosses, so, if you plan to use timber for your paving, either in a decorative format as illustrated below, or as a more traditional deck , be very, very careful, and don't come crying to me when you've a bruise the size of Bolton on your backside! 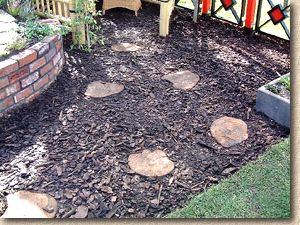 This show garden features a bark surface dressing with log slices placed as a form of 'stepping stone'. While this may look attractive, the log slices will become incredibly slippy in the wet and extreme caution will be required. However, it is a cheap and very rustic looking decorative optioon for a small part of a larger garden. In practice, most users will stay on the bark rather than risk breaking their neck on the log slices.

Although the log slices would benefit from being laid on a cement-bound bed, as would be used for normal stepping stones, in such an informal setting, it is quite likely that they would simply be plonked on the bare earth.

A progession of the log slice stepping stones shown above can be used to create a whole pathway using log slices, and there are a few ways of achieving this effect.

Obviously, log slices of a smaller diameter are required to create a tighter 'knit', that is, to reduce the 'gaps' between adjacent slices, and some organising is required to get smaller slices squeezed into the gaps created by the larger slices, but it's hardly rocket science.

In this example, the log slices range from 50mm to 250mm diameter and have been laid on a bed of sand and cement. The gaps/joints between the slices has also been filed with sand, although some of the slightly larger gaps have been filled with more decorative items, such as coloured cobbles or glass balls. 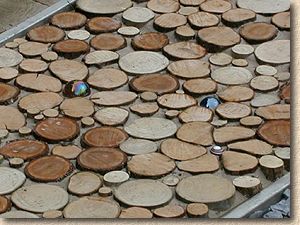 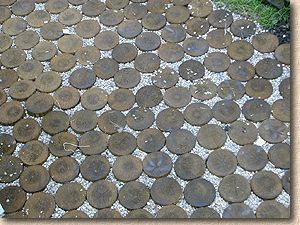 A more regular look could be achieved by using slices from round fencing posts. This means that the gaps between adjacent slices is larger than would occur when using random sizes (as above) and so the jointing may need to be a heavier materials, such as a grit or a small gravel, say 6mm or so.

Again, the individual slices are best bedded into a sand and cement mixture or semi-dry concrete and tapped down to level with a rubber hammer or wooden mallet, and then the joints dressed with the chosen gravel or grit.

Or, for a highly regular effect, consider using slices of square fence post. This technique is becoming very similar to that used for the more usual block paving, and so the individual slices can be laid on a sand or a cement bound bed, and the joints are sand-filled.

Although this may at first seem to be a contemporary solution to garden paving, it is actually a re-working of an idea used in the early 19th Century in some of our larger towns and cities, where wooden blocks were used to 'tile' the streets and roads. The idera was eventually scrapped because of the timbers splitting, swelling and splintering, and some new-fangled notion from a Mr John MacAdam who had the idea of mixing tar with small stones. 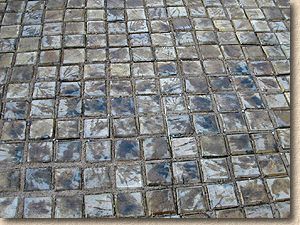 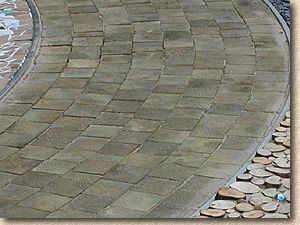 Or how about using square sections in curved courses, such as those shown opposite? This, too, can be very dramatic on an arcing path in a garden setting, as it leads the eye along the curve of the path.

And, naturally, as soon as someone comes up with a new or good idea, it's never long before someone else finds a way to manufacture it in bulk, reduce the cost and the amount of effort required, and earn themselves a few bob in the process.

And so it is with these log slice pavings - manufacturers now churn them out, ready mounted on 500x500mm boards, meaning they need only be laid out in the desired arrangement and brush-in the chosen jointing medium to hide the joins.