"Regulating Masonry" is the term used for the construction formed to 'even up' or 'regulate' an underlying structure, such as a manhole or gully, making it ready to accept ironwork, such as a cover or grating, onto an even and regular depth bed of mortar.

When the depth to be regulated is greater than around 75mm, brickwork is used, and so the term becomes 'regulating brickwork', but for less than 75mm, other units of hard, inert, material, such as slate, tile or concrete flagstones might be used, so the generic term is 'regulating masonry'.

At depths of more than around 15-20mm, mortar is unreliable. If it's wet enough to work (see notes on slump ) then it's too wet to support itself at greater thicknesses, but more importantly, it's too wet and 'plastic' to support the ironwork at the correct level for long enough to allow the mortar to harden. Consequently, the mortar needs to be kept to beds of reasonable thickness, which is assumed to be 10-15mm.

So, what happens when the depth required is more than 15mm or so? The answer is that we create two or more mortar beds at 10-15mm separated by a filler.

Obviously, the material that forms the filler needs to be strong, reliable and not fail when the ironwork is loaded onto the masonry. Anything organic, such as timber or cardboard, will degrade over time, leaving a void and so compromise the stability of the ironwork. Unless the regulating masonry remains hard, firm, stable and robust, there is a real risk that the ironwork will work loose, sink, or even collapse.

The key features of regulating masonry are: 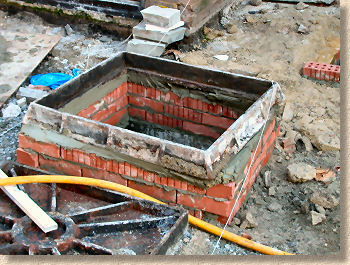 Things are slightly different now, but back in the Dark Ages when I was serving my time, apprentice brickies learned many of their skills by constructing the regulating brickwork for manholes and gullies. This gave them the opportunity to build corners, maintain level, and develop their overall skills without having to worry too much about producing clean and attractive brickwork that would be on view.

In most instances, a general purpose Class II mortar of typical bricklaying consistency is used. Increasingly, for highways and heavy traffic applications, a proprietary pre-mixed mortar is used to ensure strength, adhesion and reliability, rather than risking it to the vagaries of whatever strength of mortar a labourer decides to knock up on any given day.

Obviously, the most widely used masonry or 'filler' is bricks. However, these shouldn't be just any old bricks that happen to be lying around, but should be Engineering bricks , which are a special class of brick that have a superb load-bearing capability. In fact, any highway or traffic application requires that if bricks are to be used, they must be engineering bricks, and they must be laid as a 'double skin' that is at least 225mm wide.

Certain other materials may also be used as filler, and it comes back to that basic requirement for hard, inert items; materials that won't crush to dust, or rot away, or swell when wet.

Consider a project where the regulating masonry required is found to be, say, 35mm. It should be apparent that, with most bricks being 63mm thick, it wouldn't be feasible to use them as the filler. Even if we were to use the thinnest readily-available concrete block paver, at 50mm thick, this would still be too much.

And so a range of materials and products are used to give a full range of regulating masonry depth, from a simple 10mm deep, no filler required mortar bed, to 300mm or more of 225mm engineering brickwork.


* From modern clayware drainage pipes. Terracotta, such as that used for plant pots is generally too soft and absorbent 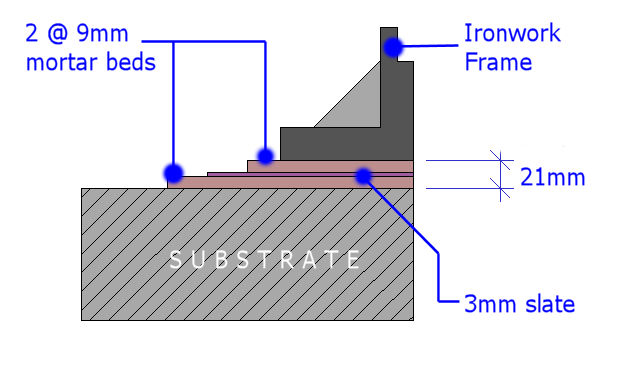 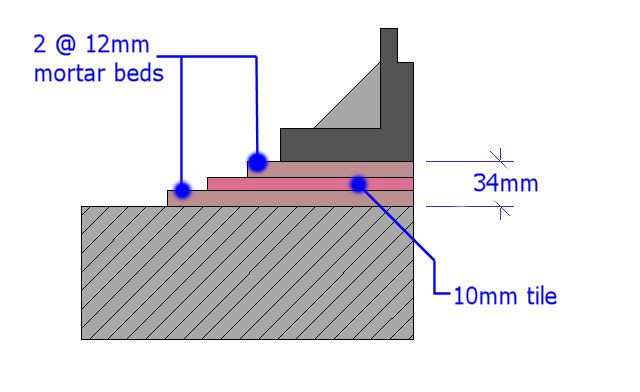 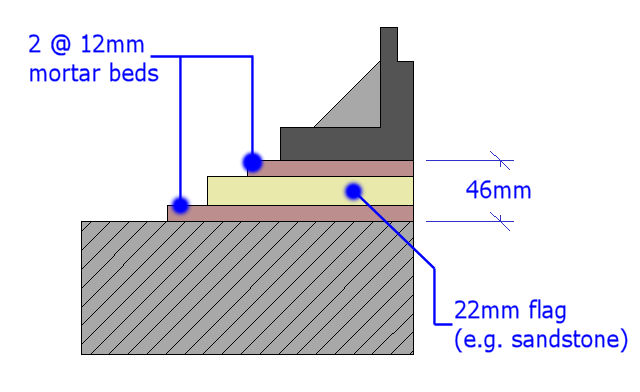 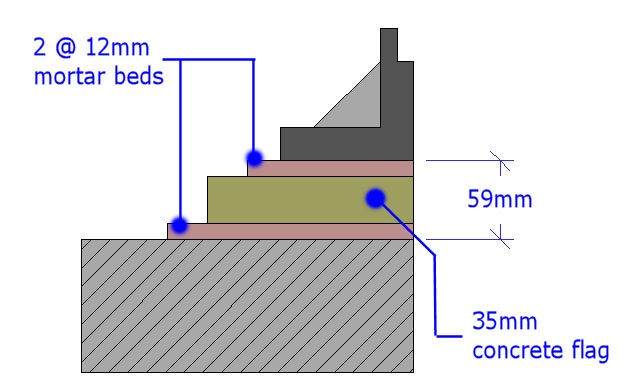 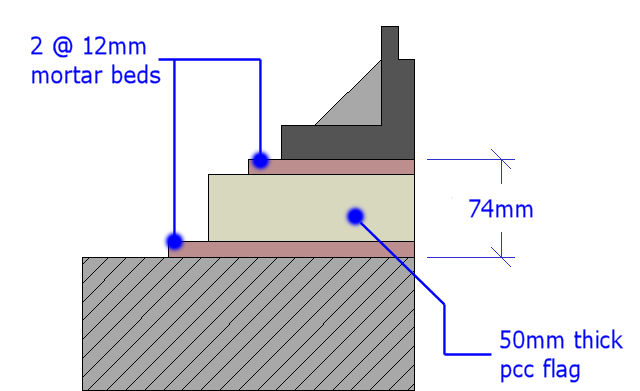 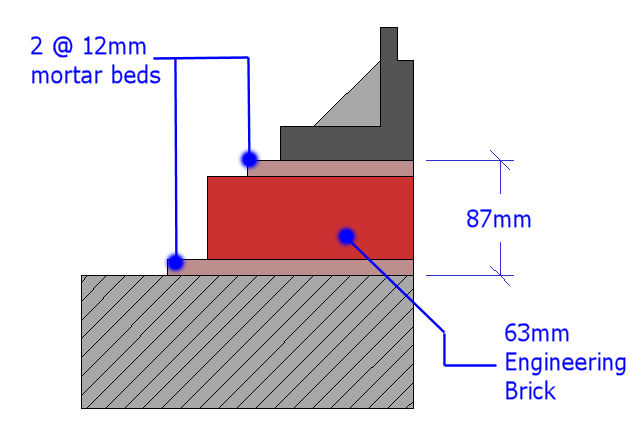 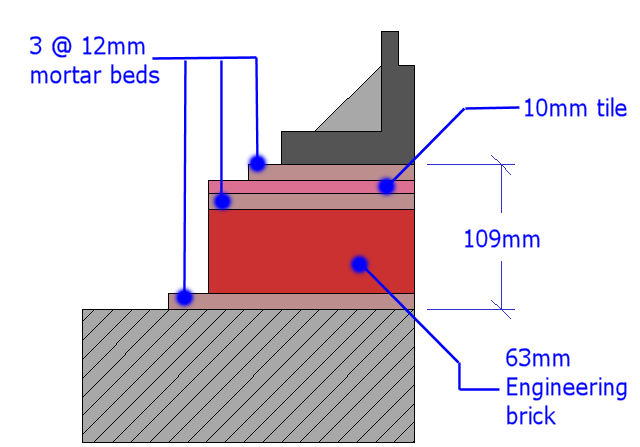 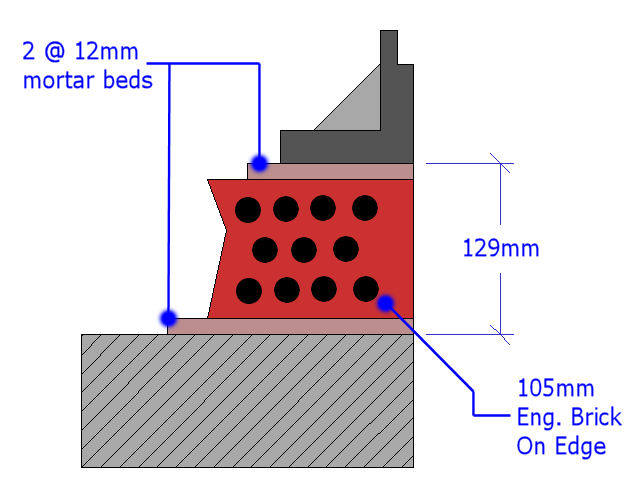 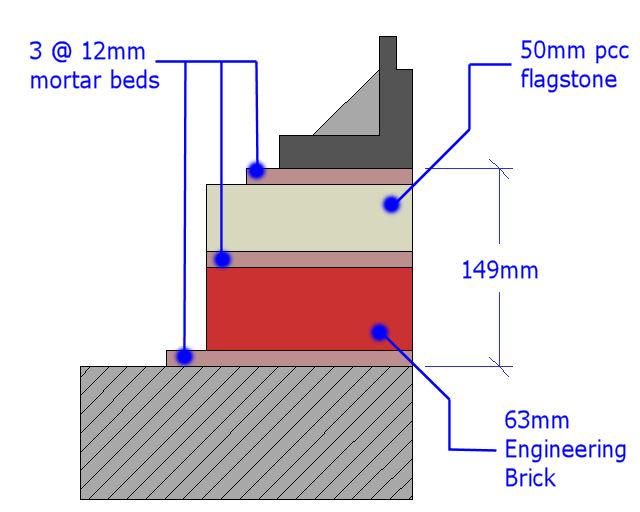 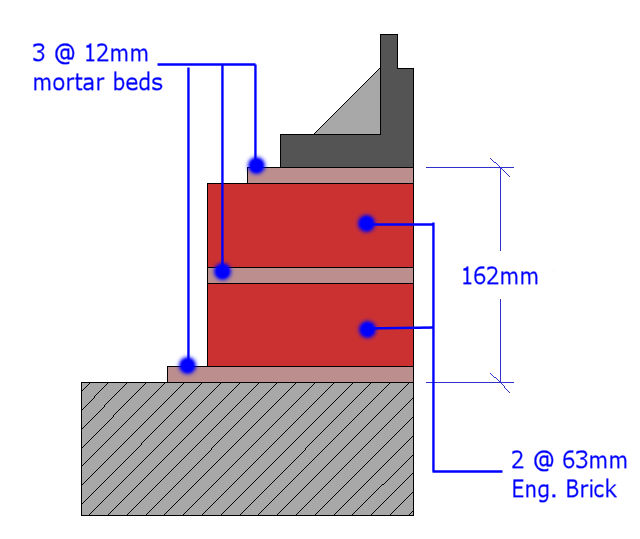 In an ideal world, the regulating masonry would be the height all around. This is often the case with manhole covers and gully gratings where the regulating brickwork is seated over a cover slab or a level concrete surround. However, there are all sorts of occasions where either the substrate or the cover or both are not quite level and therefore a sort of lop-sided build-up is required.

It may be that a manhole cover is to be set into a sloping roadway and, as should be expected, the cover slab is perfectly horizontal, and so one side needs more build-up than the opposite.

Or perhaps there's been a shoddy groundworker who has installed a gully that leaves something to be desired in terms of verticality, and so in this case, the finish is to be level, but the starting base, the substrate, is uneven. 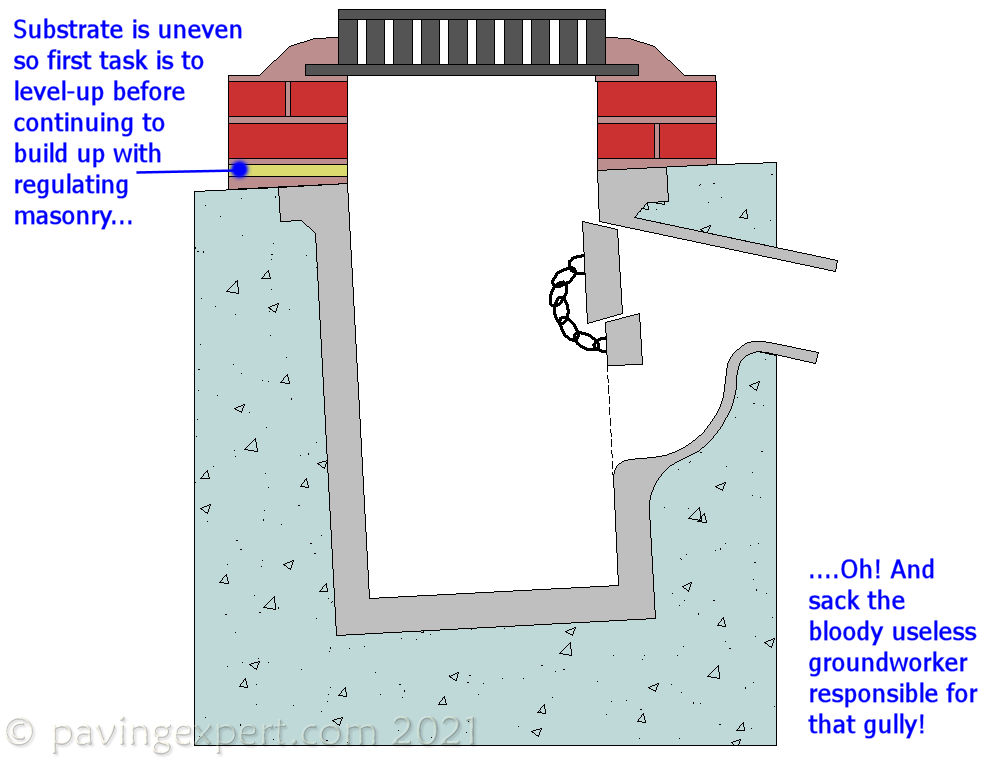 The general rule is to keep level as much of the masonry as possible. So, when the ironwork needs to be uneven, keep the masonry or brickwork level and make the adjustments in the final course. Conversely, when the base or substrate is uneven, the key is to even up first, and then proceed to completion with level/horizontal courses of masonry. The 'make-up' course at the base is known in some parts as a 'pig course'.

A complication arises, however, because most covers and gratings tend to have four sides, so in the above scenarios (and in real life), one side would be 'high', one would be 'low' and two would be tapered....

Corbelling, also known as oversailing, is a method of bricklaying or masonry where each successive course creeps in a little, gradually moving the build line over a bit at a time. It has many uses with bricklaying and masonry, but for ironwork and regulating masonry, its main use is as a method of reducing the opening size of a chamber or gully.

The important thing is that each successive course creeps in a little . It may seem that, as long as the oversail is just less than half-a-brick, then it's all in balance and everything is fine, but when such a structure is loaded, it takes very little to upset and before long, it will collapse - try it with a child's wooden building blocks! 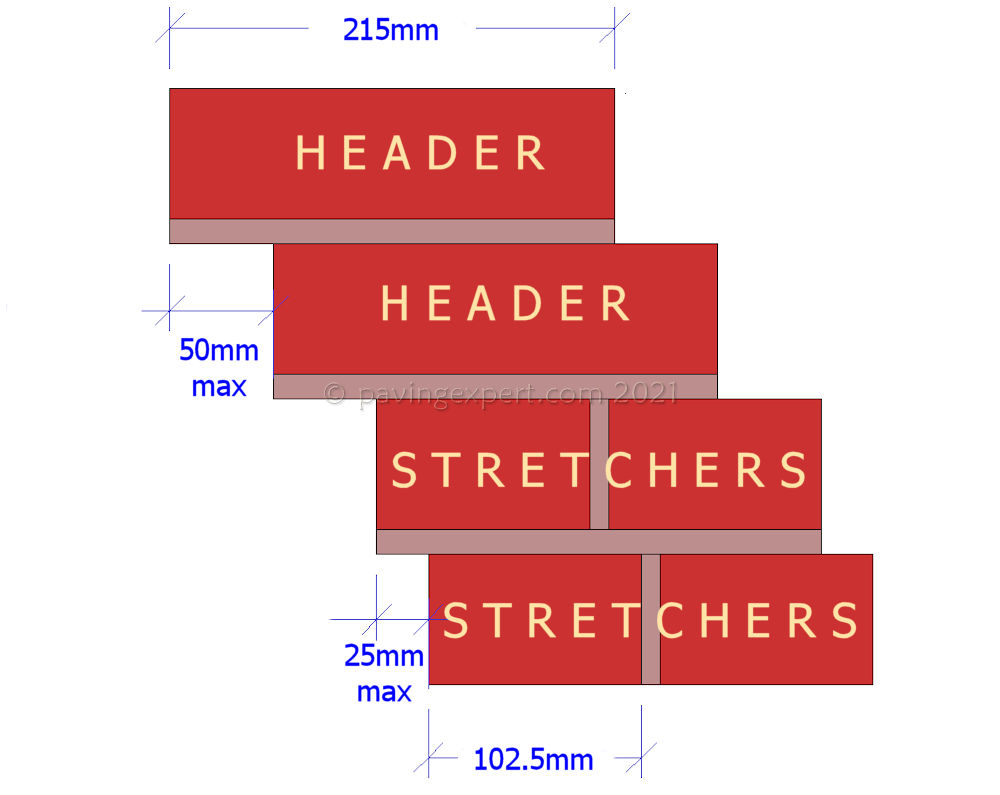 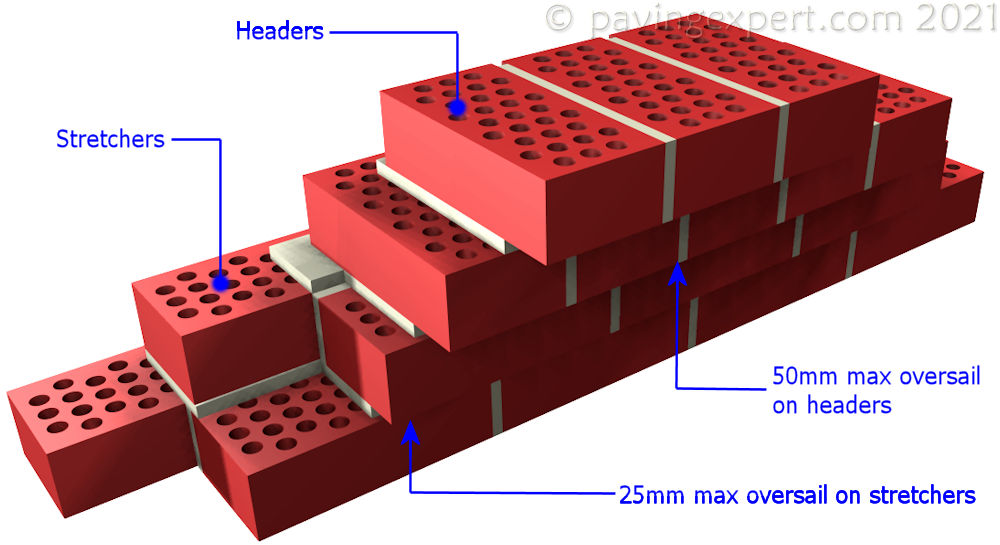 The most common application (in the groundworks trade) is for road gullies, which often have a 450mm diameter gully pot to which a 450x375mm grating is to be fixed.

Occasionally, older manholes and inspection chambers have chamber openings that are non-standard, excessive or just a bit wider than desirable, and so corbelling is a technique that allows the accessible opening to be reduced to suit a standard cover such as a 600x600mm or 600x450mm unit.