Reinforcement is used to strengthen concrete, to give it incredible load bearing capacity, and extend its life. This page looks at the more popular types of reinforcement used with concrete for paving and surfacing, including mesh, rebar and poly-fibres.

Concrete is, by nature, a brittle material that performs well in compression, but is considerably less effective when in tension.

Reinforcement in concrete is used to absorb these tensile forces so that the cracking which is inevitable in all high-strength concretes does not weaken the structure.

For many years, steel in the form or bars or mesh (also known as " re-bar ") has been used as a reinforcement for concrete slabs that are designed to experience some form of loading, whether that loading would be carrying traffic, spanning a void or bearing another structure such as a wall. In many slabs, steel mesh has also been used as a crude (and often ineffective) method of crack control.

Latest developments in concrete technology now includes reinforcement in the form of fibres, notably polypropylene fibres , as well as glass or steel fibres . Fibre-reinforcement is predominantly used for crack control rather than structural strengthening.

Where steel reinforcement of a slab is required for structural reasons, the specification will more than likely require high-tensile steel bars as well as fabric mesh, and the design should be undertaken by a qualified engineer. Steel mesh comes in a wide array profiles with varying mesh sizes and wire sizes as indicated in the table opposite.

Typically, the mesh, also known as 'fabric', comes in sheets measuring 4800mm × 2400mm which are cut to required size on site by means of a cut-off saw or 'croppers'. Where sheets need to be overlapped, the lap should be at least 350mm and the two layers should be lashed together with tie-wire.

The most commonly specified steel fabrics for paving works are A142 (6mm wires), A193 (7mm wires) and A252 (8mm wires). A142 mesh is often used in 100mm thick light-use slabs such as paths, driveways and garage bases, while A252 is normally associated with heavier-duty 150-200mm thick slabs, with A193 used in either. In light-use applications, a single layer of fabric may be used, but in heavier jobs, two layers are used "top and bottom".

There must ALWAYS be a minimum of 50mm cover over steel reinforcement, both above, below and around, as shown in the diagram opposite. The fabric is supported from beneath at regular intervals by padstones, which are often broken pressed concrete flagstones, or "chairs", purpose-made plastic or steel supports. These supports are spaced roughly every 600mm or so, sufficient to carry the fabric without allowing it to sag unacceptably.

As mentioned above, high-tensile steel bars are not normally used in pavement slabs unless there are extenuating circumstances, but are regularly used in ground beams and vertical structures. Bar steel is also commonly used in toed garage and house slabs or rafts where the building is to be constructed from brickwork; by keeping the slab in tension, the steel helps prevent cantilevering forces of the brickwork cracking the slab.

Steel-fixing is a trade in itself and is currently beyond the remit of this web-site.

It should be noted that synthetic fibres are not a replacement for steel in structural concrete , but are of benefit in reducing the incidence of small cracks within the slab brought about by plastic shrinkage and settlement during the curing process. They are often used in conjunction with steel fabric.

The fibres are usually polypropylene or polyester filaments and come on various lengths for differing applications. They are added to the mix while it is still in the drum at the rate of around 600-1000g per m³ of concrete. It is essential that the fibres are properly and thoroughly dispersed throughout the mix and are not allowed to 'clump', creating fibre-free areas of concrete. The addition of specialist wetting agents will aid this process. Luckily for us, the concrete batch plants can control all of these parameters and ensure a properly designed and mixed concrete is delivered to the site.

Along with improved crack control, the addition of fibres to a concrete mix has been shown to improve impact resistance and hardness, reduce segregation of aggregates and incidence of bleeding during the curing process, reduce permeability after curing and to offer better frost and fire resistance in the finished slab.

The fibres work by "tieing together" the concrete during placement, during the cure and after curing has been completed.

- fibres absorb most of the tensile forces caused by the natural shrinkage of the mix as it changes state from a freshly-placed liquid to a fully-cured solid.

- once the concrete has cured, the effort required to de-bond, stretch and/or break the fibres within the matrix by tensile forces effectively reduce the incidence of surface cracking and the inherent brittleness of a concrete.

Many of today's high-quality batch-mixed concretes will incorporate fibres of one type or another as their relatively low cost is more than justified by the benefits brought about by their inclusion. Most ready-mixed concretes supplied for decorative concrete work rely on the fibre content to acheive the high-quality finish required for that type of prestige paving.

Reinforcement - a view from inside the concrete industry

Malcolm Bruce, a.k.a. Brucieboy to his pals in The Brew Cabin discussion forum on this website, has spent a lifetime in the concrete batching industry, advising on mixes, specifications, additives and the use of fibre reinforcement.

Here, he shares his thoughts on the use of both mesh and fibre reinforcement in modern slab construction:

When mesh is used:

One of the problems of placing steel mesh within concrete is keeping it in the correct position within the slab so that it carries out its job properly.  It's not uncommon for a contractor to complain that the ground floor slab has cracked because the concrete is at fault, only for a subsequent investigation (generally done by coring or using a cover-meter) to reveal that the crack control mesh is sitting just a few millimetres from the base of the slab.  When mesh is used, it should always be placed near the surface of a slab with a minimum 50mm cover if it is to minimise plastic shrinkage cracking. 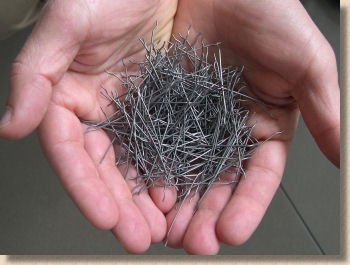 Nowadays, many of the large edge-of-town retail developments, commercial blocks and the distribution warehouses have their ground floor slabs (and mezzanine slabs) constructed using concrete containing steel fibres.  These are often added to the truck-mixer on site (by means of a conveyor or blasting machine) along with a generous addition of super-plasticiser to provide the workability needed to place it.

Fibre dosages are typically in the range 30 to 40 kg/m³.  Typically costing about £1 to £1.25 per kg, the addition of steel fibres makes the treated concrete quite expensive.  However, compared to the cost of buying conventional steel mesh reinforcement and the associated storage, cutting, placing, etc., it usually works out to be quite competitively priced for the contractor and/or the client. 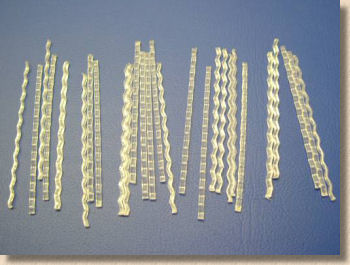 Macro synthetic (plastic) structural fibres are typically 30 to 50mm in length x 1mm diameter and used at dosages generally in the range 4 to 6 kg/m³ They are becoming more popular for use in ground floor slabs, particularly for the smaller type of building such as commercial offices, schools, grain stores, etc., because they're more user friendly, they're about half the cost of steel fibres, and they can be added to the truck-mixer at the plant (or on site if preferred).

When polypropylene monofilament fibres (typically 12mm in length and very fine diameter) are used to replace or complement steel mesh, it's sometimes erroneously assumed that curing can be neglected.  This is a serious error.  The one thing that is certain with concrete: it will crack. 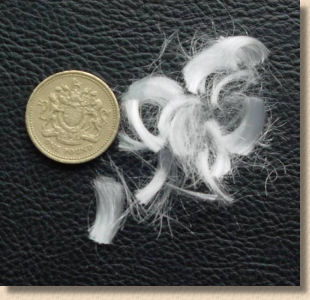 If this rate of water loss is controlled by proper curing, such as the use of spray-on curing membranes, or covering with plastic sheeting, etc. much of the unavoidable cracking will be suitably controlled and managed.  Failure to control curing will usually result in the concrete cracking in an unacceptable manner, with crack widths up to 3 or 4mm being common, particularly in warm, windy weather.

It has to be stressed that the above references to fibres relates to their use in ground supported or "crinkly tin" (Holorib-type) supported mezzanine floor slabs.

In both the above cases, the fibre supplier must be consulted to advise on the slab design, particularly fibre dosage, grade of concrete, slab thickness, etc.  This service is usually provided free of charge when fibres are purchased.

The main benefit of fibres, whether steel or plastic, is that they are uniformly distributed throughout the full depth of the concrete, which means the reinforcement is fully three dimensional.