My diary for late September is normally dominated by Glee , the annual jamboree for next season's new hard-landscaping products staged at Birmingham's NEC in amongst the pots and pets of the garden centre trade's extravaganza. Three days to traipse around the show, a day to recover, a day to collect my thoughts, a day to write my review and a final day to turn all that into a webpage with photos and comments and what I hope is constructive criticism. This year, I arrived at 9am Monday, left at 2pm the same day, and had mentally composed the review before I'd got back to the car park.

For a variety of reasons, some political, some philosophical, some logistical but mostly financial, all but two of the usual exhibitors had decided to "take a break"this year. Some had made clear their dissatisfaction with the event following last year's ramshackle show; several more had seen which way the wind was blowing and charted their course accordingly; more than a few had looked at what it cost and what it brought in and then decided it just didn't make economic sense. So, by the time the doors were flung open on Sunday morning, just two paving distributors of any note had made the effort.

First up is Natural Paving . A more modest display, probably only a quarter of the size of 12 months ago, and cheek-by-jowl with BALI, reinforcing a mutually beneficial relationship in which Natural Paving can attribute an enhanced air of respected endorsement for their progressive 'Approved Installer' scheme, while BALI further their case to be seen as the central organising body for all landscaping and not just the soft variety with which they are more readily associated.

With a significantly smaller space, there is less room to show off new products, and in a difficult market the appetite amongst consumers is suppressed and so it makes sense to limit just how much is put on the platter. Accordingly, just two new lines of note from Paul and his team. The one with the best prospects is the Flamed Oak sandstone, a mocha-coloured sandstone from the trade's favourite sub-continent, that has been toasted to impart a subtle, organic texture that is gentler than the usual riven, but not as processed-looking as the sawn or honed materials that have been on the menu for the last few years. Under the god-awful sodium lights of the NEC's Hall 4 it's all but impossible to discern the true colour and texture, but too many years of peering through the sub-orange murk allows me to detect the presence of genuine potential.

I have to admit of being less certain about the Jupiter Marble. There's no denying it's an attractive dark-veined white marble, and in the complementary sphere form (which come at an unbelievable bargain price) the stone shows off its undeniable charm to best effect, but as a paving, its potential is limited. Its best application would be as a 'conservatory-patio' follow through surface, creating that allegedly sought-after seamless transition between house and garden.

Marble is a tricky material for paving. Admittedly, it's superior to its bastard offspring, Travertine, but it scratches easily, and the lighter colours show every single mark, but its biggest problem will be dirt. It's a high maintenance stone, demanding regular cleaning or top-quality sealing to keep it looking smart. Left naked beneath the elements, it rapidly acquires a patina of dirt and algae that reduce it to something no better than any other light-coloured stone.

Just across the aisle lurked McMonagle Stone and Romex , the resin jointing material they distribute throughout Britain and Ireland.

There are significant developments on the horizon, not least for a simple resin-bound paving system that will probably make an official appearance next Spring, but for now, the big news is the 'advanced formulation' Rompox Easy which can now be used in the wet, allowing year-round working in these soggy islands. However, allowing the German manufacturers to produce, completely unsupervised by a native speaker, the English-language promotional literature has resulted in some strange "advantages. Who could fail to be stunned by fact that the upgraded Rompox benefits from " Elutriation "?

Correcting pidgin English is a minor task, cementing Romex's position as the leading resin-bound mortar in Britain and Ireland is a bigger challenge as more and more pale imitators crawl out of the woodwork. Improved formulations are essential because previous polymeric mortars have fallen by the wayside by not responding to the needs of the end-user, primarily the contractor. Wet-weather working is a positive enhancement, and the move to produce colours based on native British and Irish sands will make the product range even more indispensible to the clued-up contractor. 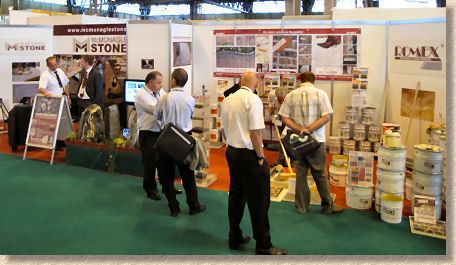 McMonagle have published a chunky new brochure which gives better coverage of their various stone offerings but rather than consider it now, an in-depth review will appear on the website during October.

On the subject of jointing materials, the would-be talking point of the Hall was the appearance of part-time builder and jobbing tv handyman Tommy Walsh promoting Dansand , a weed-toxic jointing sand that, according to the blurb, somehow renders conventional paving permeable. I tried talking to one of the stand attendants and he didn't seem to understand that simply using a permeable sand (and what sand isn't permeable?) does not a permeable pavement make. 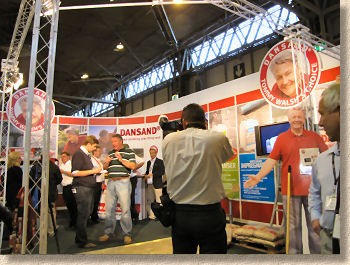 The poor lamb looked lost when I mentioned a Type 3 sub-base, so I walked off, dissatisfied, disappointed and with a word that rhymes with "muck pit" ringing in my mind. Apparently, I wasn't the only one. A fellow contractor I met in the butty bar recounted more or less the same experience. 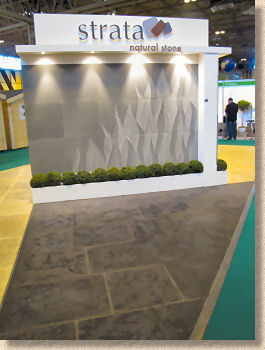 Anyway, back to products which don't depend on zelebrity endorsement to warrant attention. Strata Stone , via their relationship with Stone Age have been surely and steadily building an enviably strong position within the distribution sector without necessarily being in-yer-face.

For 2009, they've ascended to the dizzy heights of being main sponsor of the Hall, and on what would be a small-to-medium sized stand in normal years, they managed to produce the undoubted showstopper, but for once, it wasn't the paving that grabbed the eye, but some highly intriguing 'wall art' manufactured from stone. Very different; very chic; very, very nice.

But it's the paving that I came to see, and the four-sided open stand offered four main products for our delectation and delight.

Moorside is an antiqued and surafce-polished mid-grey limestone with attractive edge fettling that makes it look even better. Modular sizes mean that it can be laid in a random layout. Wharfedale is a warm honed sandstone in a 500mm gauged width and five different lengths which makes is best suited to coursed layouts although patterned or herringbone layouts would also be possible. Tulliers is another limestone, reminiscent of some of the more outlandish French stones of that type. Only three, relatively large, modular sizes rather limit layout choice, but that shouldn't detract form its appeal. Finally, Bourne Grey is very grey, almost black but it's uncertain whether it will be afflicted by the bleaching that spoils other dark limestones. Four sizes based on a 200mm module should enable reasonable layout choice.

All of the above are calibrated to 20mm, but I can't understand the incompatible sizing. Sure it would be better to have a standard module size allowing mixing and matching. The other point that should be made is that all are shown as internal flooring in the show product guide. I'm sure marketing director, Paul Childs, would have mentioned their limited use if that was the case, so I can only assume external photies were just not available at the time.

There's much to commend each of these offerings, and it's impossible to say which is the most obvious winner. Personally, I like the Moorside best, but that is purely on aesthetics. I suspect the faux-Français Gîte charm of the Tulliers will win over many admirers, but it's a bit too farmhousey for me.

So: is this the end for Glee? There can be no denying that this year's event was anything other than a disaster, despite the very best efforts of those mentioned above, but, as the saying goes, one swallow does not a summer make, and you can't have a premier paving show with just two or three exhibitors, no matter who they are. Before the show, I suspected a lot of political posturing and brinksmanship from some of the usual exhibitors, but with almost two weeks now passed since the doors were first opened on Glee 2009, and having been afforded the luxury of time to reflect and talk to others in the trade, I strongly suspect that, unless some serious sucking-up is done by the event organisers over the next few months, the hard-landscaping trade and Glee have reached a parting of the ways.