For the last few years there's been a vacancy for a good hard-landscaping exhibition, and over those years there have been various attempts to claim the position, but none, to date, have done so with any real sense of conviction. The problem has always been the F-list roster of exhibitors that populate these events, and all of the organisers know that if they wish to make a serious claim to be the de facto hard-landscape event, you need at least one, preferably two or three, of the really big names, the major national manufacturers and distributors who command 10% or more of the market.

So, simply declaring yourself to be "The Landscape Event" is not enough. To be *the* event, you must have *the* names. Having said that, there is a case to be made that the self-proclaimed Landscape Event at Battersea Park in that London is probably as close as we've come for a good while.

What is holding it back is that lack of some seriously big names, and also the fact that it is all very London-centric. Having said that, there is a better-than-average representation from some of the more important wheelers and dealers of the hard-landscape trade, definitely C-list, and possibly a couple or three B-listers. See if you can work out who's who from the following round-up.

We'll start with concrete paving, which has struggled, to put it mildly, over the past years thanks to the double-edged onslaught of cheap, imported stone and a buggered-up economy. However, there are encouraging signs of a fightback with some very interesting new products which are beginning to be taken seriously as alternatives to the usual grey granite.

Take the new colours from Dutch paving manufacturer, Schellevis . The intriguingly-textured concrete flags and blocks, reminiscent of unfilled travertine, have been attracting more and more attention lately, so the development of new colours specifically for the British market can only enhance the appeal. Call me fussy, but having a light- and a medium warm off-white colours both called 'cream' is probably not the best idea. The lighter one could certainly be described as creamy, but the slightly darker one is, at least to my eye, more akin to buttermilk. 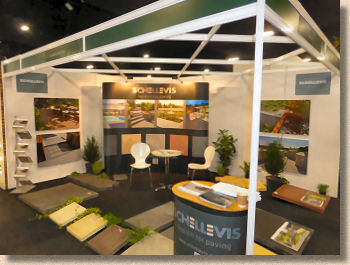 Tobermore could be considered an almost-big name. They've certainly had a significant impact since first making a determined effort with the mainland British market a decade ago, but selling concrete blocks manufactured a hefty 500 miles away in Northern Ireland can't be easy or particularly profitable. Schellevis are actually nearer to the London market! 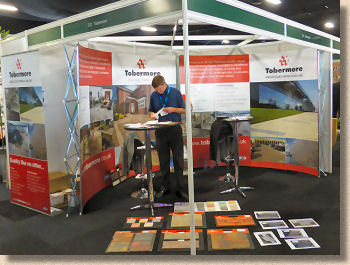 And relying solely on laminated A4 photies of new products rather than actual samples won't make that task any easier. Annoyingly, the CityPave (I'm not even sure that is the correct name for it!) looked very interesting, but you'd never tell from the insipid photies and lacklustre presentation. The 'old guard' at Tobermore have been swept away and replaced with, it's claimed, sixteen new brooms in Britain alone, but how effective are they? Your man on the stand was not, apparently, aware of this website or what it is that it does, which I can't imagine happening a few years ago. Sorry, but I can't take seriously an alleged paving advisor who doesn't even know the basics.

Maybe a word with the exceptionally knowledgeable and passionate Ketley Brick , who have faced an even tougher struggle selling clay paviors in a market that's been more or less completely bought out by foreign interests with no empathy for the British hardscape heritage. Here we have a full palette of products to see, touch, taste and smell; a full understanding of the market and its major challenges; and a genuine enthusiasm for exploring new opportunities for such an important product range.

Ketley are one of the last remaining clay pavior manufacturers in Britain, making traditional paviors from British clay and so producing distinctively British colours, most notable of which is, of course, the Staffordshire Blue. But look at what they are doing with quarry tile style pavers based on the fabulous multi-toned Etruria marl clay. You can't make that in Holland or Germany. It's as British as Pork Pie and Brown Ale. In a world where more and more of our homes, gardens, towns and cities are surrendering their local identity to Chinese granite and Indian sandstone, we should treasure these redoubts of native style. It's products such as these that make Britain distinctively and uniquely different. 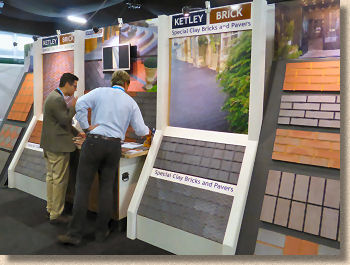 McMonagle Stone have some unique products, too, although theirs hail from the far north-west of Ireland. The Donegal quartzite sparkles like little else, but is shockingly underused on this side of the water. Hopefully, the deliciously honed and the shot-blasted sandstone will fare better, it certainly deserves to do so. Suitable for both indoor and external use, this is bang-on-trend for the 'flooring-paving' style which sees the same surface used on either side of the fashionable extra-wide patio doors. 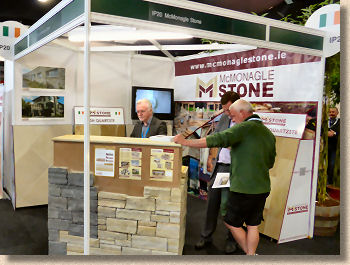 The clever 'Stoneer' cladding system is performing better than they could have wished, so much so that the work-flow in the sawing sheds is being re-jigged to increase production, and there's an active search for yet another new saw. Exciting times!

Sticking with stone, two of the nation's more prominent suppliers, CED and London Stone had a strong presence, while Stockscape (an 'off-the-shelf' version of Hardscape) and newcomer AddScape also staked a claim for attention.

The CED display is a gradually evolving thing of wonder. It's never less than visually stunning, with a select but restrained offering of stone and aggregates with real character. Back this up with knowledgeable staff and it soon becomes apparent why the stand is perpetually busy. I spotted a quartzitic sandstone flag that is truly gorgeous. All I need now is a design job where I can persuade the client to go with it!

Good news, too, from MD Giles Heap that work on the comedy revision of BS7533 reported and deservedly mocked on this website back in December 2013 , is now underway with a much more credible committee of people who do actually know the difference between a flag and a sett. We'll see!

On less than half as much space, London Stone had cleverly relied on wall-mounted samples to show their range of native and imported stone, backed by a hefty new catalogue and a swarm of friendly, approachable salesbods. It's an extremely effective way to make the most of limited space, even though it's not particularly easy to form a properly considered opinion of a stone from a twelve inch square under indoor lighting. Still, it gives just about enough of a taste, and invites visitors to paw the surface, which then presents the opportunity for a sales pitch. Sometimes, less can be just as impactful.

Probst are probably the best known of the specialist paving handling tool manufacturers and that is largely down to the quality of their kit. With few exceptions, you only buy a Probst tool once because it will normally last you a lifetime. So, what they really need from a show like this is plenty of contractors, which just didn't seem to be happening. Sales manager, Nigel, reckoned there was just about enough to have made it all worthwhile, but he wasn't overwhelmed.

He did, however, have a neat little attachment for a cut-off saw on show. It's an adapted square funnel which fits to the bracket found beneath most saws for fixing the machine to a wheeled trolley as used when cutting roads or floor surfaces. Anyway, the funnel is connected to an industrial vacuum system and then effectively gathers up all the dust and other crap spun out when cutting.

OK, so it's not really dust suppression, but it does remove around 90% of the dust and, for sensitive joints where a water sprat wouldn't be practical, or where slurry run-off could stain the paving, it's a neat little idea.

Read more about the Dust Director

So, what was learned from the day? Most of the exhibitors were more than pleased with the footfall and with the support from the organisers. Little touches such as free on-site parking for their staff and installation/breakdown teams can mean so much. Admittedly, most of the visitors were from inside the M25, but that seems to be where all the money is these days, and there's certainly more construction activity going on in London and the south-east of England than just about anywhere else in the country.

However, if the "Event" is serious about being a showcase for the wider paving and hard-landscaping industry, then it needs to exude sufficient appeal to draw in designers, architects, specifiers and contractors from further afield. And it simply must pull in at least one of the A-listers. A seminar programme is now more-or-less mandatory at these events, but the balance here was far too heavily skewed to the soft-landscape side of things. Yes, there were a couple of notable exceptions but for credibility's sake, it needs to be at least 40% hard-scape, possibly looking at design decisions and the critical issue of installation. 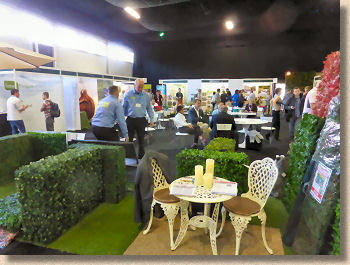 Still, and despite all the distracting softscape nonsense and gimmicky promotions (a screw-down ruler to mark a straight line on a flag? Really? FFS!), it's the best such event I've seen for at least five years. A bit more focus could nudge it closer to being an essential.