Home / About Us / News / Tobermore to the stars

Per ardua ad astra, as they say in the RAF. "Through struggles to the stars", and this certainly has been the case for one of the latest Tobermore projects which involved providing the paving and hard-landscaping for a number of sites in the Spaced Out project, the world's largest scale model of the solar system.

The project, backed by Nesta , G-mex , and the Institute of Physics amongst others, involves the construction of 18 artistic interpretations of various solar system features, stretching from Camborne in Cornwall all the way to Whalsay in the Shetland Isles. The central feature, The Sun, is located at Jodrell Bank near Macclesfield in Cheshire, home to the world-famous radio telescope, and last Friday became the first of the projects to be officially opened.

Project director, Nigel Marshall, and site designer, Ann Picot, have spent the last 12 months pulling together the project and getting local schools, artists, craftspeople and manufacturers to help make the idea a reality.

Tobermore Concrete Products have supplied the paving and hard-landscaping materials to three of the sites in north-west England: The Sun at Jodrell Bank, Ceres at Furness Vale, and Mercury at Holmes Chapel. Tobermore's GB Sales Director, Mark Law, has been a keen promoter of the project since first getting involved last autumn, and on a chilly, blustery day, in early March was delighted to see the first of the sites opened by Astronomer Royal, Professor Sir Francis Graham-Smith FRS, and children from Sacred Heart school in Oldham.

In between shivers, Mark told Pavingexpert,

And it has been a struggle, at times. Brew Cabin Irregular Ken Culshaw and his team from KGC Paving in Leigh were, at times, knee-deep in late winter mud as they battled to excavate the site and then haul several tonnes of sub-base, concrete, sand and paving in wheelbarrows to the installation right at the foot of the iconic radio telescope. At times, they began to doubt they'd ever get the work completed on time as they were unable to use any heavy machinery so close to the telescope.

The installation at Jodrell Bank uses Tobermore Silver Granite Sienna Paving with edge courses of Silver Grey Mayfair and Charcoal Tegula Setts, all held in place by a Charcoal Tegula kerb. The colours and textures were deliberately chosen to emphasise the brightness of our local star, and blend well with the soft-landscaping, particularly the red-stemmed dogwood, Cornus sanguinea which represent the fiery heliosphere. The circle of paving surrounds a central sculpture designed by the children from Sacred Heart school and fabricated by JD Plastics of Liverpool using specially coloured Plexiglass supplied by Amari Plastics. 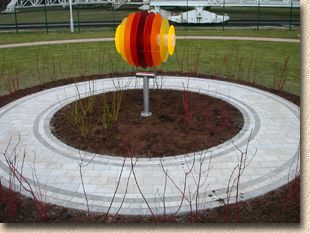 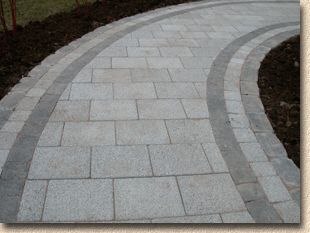 The installation at nearby Hermitage Primary School in Holmes Chapel represents Mercury, the planet nearest to the Sun, and features a 6m diameter ring of Tobermore Golden Mourne paving installed by Maple Leaf Designs. Meanwhile, over at Furness Vale, the largest known asteroid, Ceres, has been re-created at Furness Vale Primary School and features a solid circle of Tobermore Tegula paving with an outer ring and link path of Silver Granite Mayfair Setts, all installed by Nick Rowley.

Pavingexpert's Tony McCormack helped out with some of the detailed planning for paving at the sites, and was delighted to be able to attend the opening of the first site. 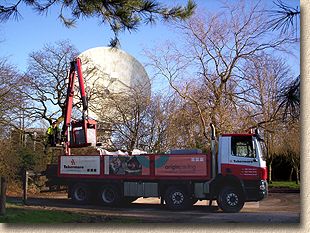