Resin surfacing is a popular choice for all sorts of paving projects, but there are different types and they each offer a variety of benefits. This page gives an overview of the options available, and links to a whole series of related pages covering the potential for resin based surfacing and paving.

Resin based surfacing systems are another comparatively recent introduction to the British and Irish paving markets. Their development has been made possible by significant advances made in polymer and epoxy resins over the past 25 years. The basic premise is that a high quality resin is used to "glue" a decorative or coloured gravel or fine aggregate to a firm base (usually macadam or concrete ), or to bind together selected aggregates before laying over a base or sub-base .

The first system is known as 'bonded' or 'scattercoat', while the second system is referred to 'bound' or 'trowelled'. 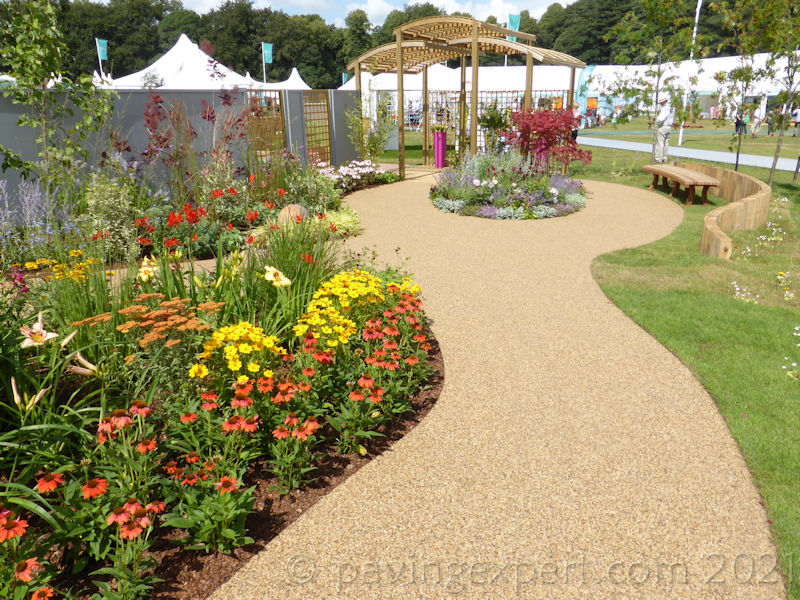 The result is an extremely hard-wearing surface, suitable for indoor as well as external use, that is fairly resistant to weeds and relatively low-maintenance.

The better systems are totally resistant to oil or petrol spillage, do not fade in UV sunlight, are capable of tolerating a wide range of temperatures and can be laid in a massive range of colours and patterns, and all this is based on just two key ingredients: the aggregates and the resin itself.

One great advantage of the resin-based surfacing systems is their versatility. They can be used on more or less any project, or any scale, to suit any budget. Possible uses include internal flooring, driveways, paths and patios, footways, cycleways, bus lanes and road junctions, commercial properties, car parks ... the list really is endless!

Motifs, logos, house numbers or just about anything else imaginable can be inlaid into the resin surfacing by using a contrasting gravel.

Some suppliers claim to be able to supply almost 700 different colours by using imported aggregates or specially coloured gravels, and by 'blending' gravels from various sources to create unique colour schemes.

So, if it's so wonderful, why isn't it seen as often as, say, block paving? 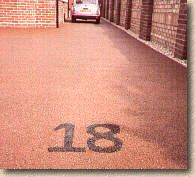 Well, cost was once a major problem but this has been less of a problem over recent years as more companies have entered the market to introduce more competition, and the market itself has matured, benefitting from advanced technologies and economies of scale.

The major barrier to wider use is simple customer awareness. Resin-based surfacing is not an option familiar to many architects, specifiers, designers and contractors in the construction trade, and in the vitally important residential market (driveways, patios, etc.) customer awareness isn't what it could be. However, since being featured on this website, there does seem to be an elevated level of interest, sufficient to convince three of the leading companies to have their products and techniques featured on subsidiary pages of this section.

There are two basic methods of applying a resin-based surface: Resin Bound and Resin Bonded.

The remainder of this page gives elementary coverage of the principles behind both methods, but there are comprehensive descriptions of each system, and the variations available, on subsequent pages, provided with the assistance of three of the largest and mosr respected names in the resin surfacing business.

Most systems require there to be an existing base to which the resin system can be applied as an overlay - there are exceptions, such as The TerraBase® system listed above. The base, or substrate as it is sometimes known, can be an existing pavement of tarmacadam, asphalt, concrete or other monolithic material that has been cleaned and prepared, or it can be a newly laid base.

The preferred bases vary from product to product, but, in general either bitmac or concrete are preferred because they are "Monolithic", that is, they are whole, single 'slabs' of pavement, with few, if any joints. In most cases, "elemental" pavings, that is those made from discrete units with joints between each unit, such as block pavers, setts, flags etc., are usually not suitable for use as the base for a resin-based system. In some instances (and it is only *some* instances) it is possible to lay a Bound surface over existing flags or block paving but verification from the installer is required beforehand.

The reason for this preference to avoid elemental or jointed surfaces is that Reflective Cracking is likely to occur with elemental pavements, and this would ruin the appearance, and the performance, of many resin-based systems. Although extremely tough, the resin could be liable to crack when loaded unless it is laid over a suitable base.

Flags and block paving will move slightly under heavier loads such as cars and other vehicles, which can lead to the aforementioned problem of 'reflective cracking' - this is the phenomenon where a joint between two separate paving units is transmitted through the covering material, creating cracks and fissures in the surface.

It is critically important that an existing base is in good condition, with no major cracks, potholes, weeds, contamination and the like. Bitmac, concrete or asphalt in good condition are usually adequate, but in all cases, the manufacturer's advice and recommendations should be followed regarding preparation, pre-cleaning, etching or whatever is required.

These are best constructed from mass or reinforced concrete, or from bitmac, asphalt etc, as suits the planned end use and local conditions.

See concrete hardstandings and/or tarmacadam page for fuller details of constructing these types of bases.

Some manufacturers claim a base of wood, flags/slabs or block paving are suitable bases for resin surfacing, but any such surfaces really need to be checked and verified as adequate by the supplier/contractor prior to installation. A standard wooden base may be acceptable on indoor applications, but could swell, rot and/or move on outdoor projects, and so, if a wooden base is to be used, only a proper exterior grade wooden deck surface should ever be considered.

For specific applications such as tree-pits, a special form of Resin Bound surfacing can be laid directly over a granular sub-base, such as a layer of DTp Type 1, DTp3, gravel or even sand, provided the appropriate system/product is used. Standard resin bound surfacing is unlikely to be suitable.

The base is cleaned to remove all loose and/or organic material, dust and detritus. Edging strips, usually aluminium, may be fixed to free edges to contain the surface layer and prevent edge crumbling. With certain products, a polymer primer is then applied over the base and the surface layer applied.

As mentioned above, here are two methods of applying the surface layer, 'Scatter Coating' and 'Hand Trowelling'.

As the name suggests, this method involves applying the resin over a suitable base, and then 'scattering' the chosen gravel or aggregate over the tacky resin before it sets. Some systems use pre-coated aggregates, while others rely on applying a resin over the scattered stone. 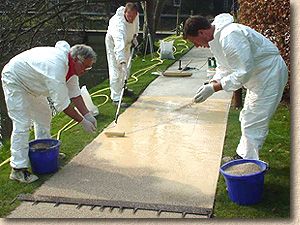 This method relies on the aggregate and the resin being combined together in mixer, and then spread over the prepared base with hand floats, screeding bars and trowels. This type of work generally ensures an adequate thickness is applied to the entire area and is a fairly common method of application. 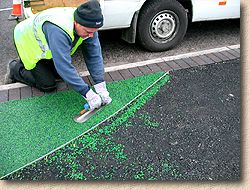 There are several Product Studies available for Resin Bound Products: 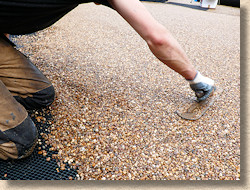 Some of the trowelled (Resin Bound) systems have been tweaked to render them incredibly permeable yet suitable for direct application over an unbound sub-base, which makes them ideal materials for use in surfacing the many tree pits that now adorn the centres of our towns and cities. 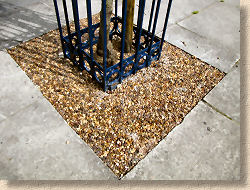 Whichever method of application is used, the resin sets relatively quickly - usually within 1 hour, and so needs to be worked efficiently to ensure the resin and the aggregates are spread, levelled, compacted and smoothed before it becomes too stiff. For this reason, this type of surfacing is best laid by experienced, specialist contractors, although, for smaller areas, such as garden paths, patios and small driveways, it can be done by competent DIY'ers.

A solvent is used to clean the tools and the mixer when work is finished. Protective clothing and a suitable mask/respirator should be worn when working with epoxy resins and the cleaning solvents.

When properly laid, resin based surfacing is a superb paving system. There are no loose stones, no weeds to clear out or to soak in 'PathClear'. The colours are light-fast, oil and petrol have no effect on the resin once set and can be simply wiped off. It provides good slip-resistance. It can be used to continue a paving scheme throughout a corporate site, so the that external walkways and internal atriums, foyers and corridors are all the same. There is an almost limitless choice of colours and multi-colour 'blends'. Panels of contrasting colours can be laid, as can all sorts of logos and motifs.

While resin based surfacing may seem a panacea, it does have occasional problems, and most of these are attributable to one common factor - cowboy contractors. There are recorded instances of the resin being 'thinned' with the cleaning solvent, of the base not being properly prepared or primed, of the resin/stone mixture being laid over bare earth and on top of existing patios. The importance of finding a reputable, experienced contractor cannot be overstated, and most of the reputable manufacturers, including those with products featured on this website, either supply their own, in-house laying gangs, or provide lists of contractors that have been properly trained and certified as competent in the laying of these products.

The major structural failure of resin based surfacing comes when the primer or the resin itself 'lifts' from the underlying base. This is most often because of frost heave or base movement, but there are other reasons, most of which are directly related to the standard of workmanship. Frost heave or base movement often leaves a void beneath the surfacing layer which then 'collapses' into the void when subjected to a heavy load.

As with other monolithic surfacings, such as tarmacadam or PIC , invisible repairs are impossible. The only way to correct a defect is to cut out the affected area and re-surface, with the likely consequence of the repair being noticeably distinct from the rest of the paving.

Prices are highly variable. Many contractors have a minimum job charge of £2,000 or more. The resin based surfacing itself costs, on average, between £20 and £80 per square metre, depending on the thickness of application, the size of the area to be covered and the type of aggregate chosen. Construction of a suitable base is not included, nor is preparation of an existing base. If you are obtaining a price for this type of surfacing, make sure the contractor stipulates what is and what isn't included in the price. 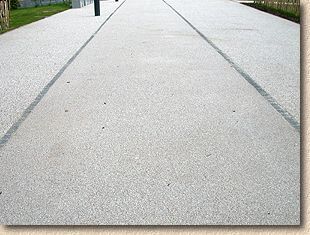 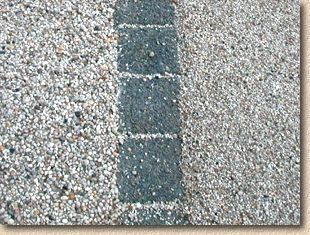 The pair of photos above show a project where the same blend of decorative aggregates in two different sizes has been used to create a distinctive, qualitative difference to a wide boulevard. The central pathway uses a 3mm light grey blend, edged with a single 100mm wide band of charcoal pavers. This pair of bold stripes marks the boundary between the central and the outside paths, which use the same aggregate but in a 6mm size. The close up photo on the right show the difference between the two sizes.