Imported stone for paving has been with us for a couple of decades now and the market began to properly settle at about the same time as the arse fell out of the economy. As befits the sale of sedimentary stone, there is a degree of stratification, with the cheap'n'catastrophic stuff sold via auction sites at the bottom, the respectable independent suppliers in the middle and the brand name ' how do we get away with charging these prices ' big suppliers lying right at the top.

There are, inevitably, plenty of intermediate strata, such as the slightly-better-than-crap sold via Garden Centres stuff which hovers just above the bottom, and, up near the top, the secondary-processed-to-bump-up-the-value paving which now seems to be taking an ever bigger slice of the cake. 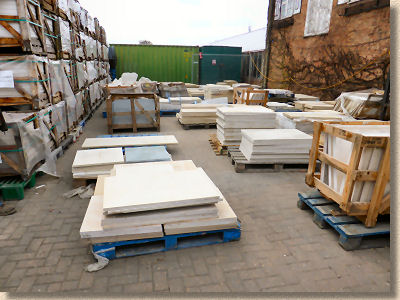 The simplest form of secondary processing is sawing, cutting the stone using big industrial saws to create what we used to call sawn-six-sides. It's a step up in class from the callow riven material which originally dominated the market and as such, commands a more appealing profit margin. Further, because the number of suppliers capable of providing good quality sawn stone is much more limited than the plethora of riven stone suppliers, there's less competition and this, too, helps support a better margin.

But if you want a more secure market, one that guarantees top prices, you want to be selling bespoke stone, stone cut to order; steps, copings, arcs and circles, custom pieces for showcase designs.

London Stone have created a niche for themselves by specialising in precisely that type of sawn stone, and they are ideally located to serve the source of such orders, the over-privileged and more-money-than-sense crowd living in that London.

To be fair, not everything they sell is sawn. They still do a good trade in the everyday riven flagstones, tumbled setts and the like, but their real forte is very much the bespoke sawn stone. And they don't limit themselves to imported stone, either. They are quite happy slicing up scants of Pennine rock, so-called Yorkstone (even when it comes from Lankysheer), if that's what their customers require.

So, when the band of brothers behind London Stone announce there's to be a grand Open Day, an opportunity to have a proper nosey around some of their locations and get to know the company a little better, it's an offer no-one with a ha'p'orth of sense can resist.

We start off at their stock yard on the outskirts of Slough, tucked in tight against the M4 and directly beneath the Heathrow flight path, not that the stone seems to mind.

Hey! Don't knock it! The stone doesn't really mind where it is stored or prepared or despatched, and there are dozens of stone suppliers who would sell their own sisters for such a yard as this. It's large, it's accessible, it's a solid concrete surface (block paving in some parts!) and it's incredibly handy for the M4/M25. There's a neat little detached office separate from the main yard, and an area where quality control checks can be carried out on large display racks, and there is a ya-hooge car park at the front, complete with hand car-wash and, most important of all, a bacon butty van. If that doesn't draw in the contractors, I don't know what would! 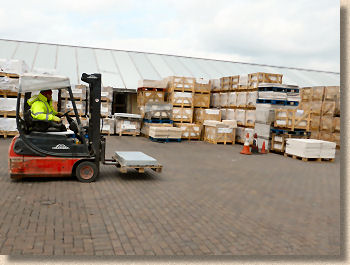 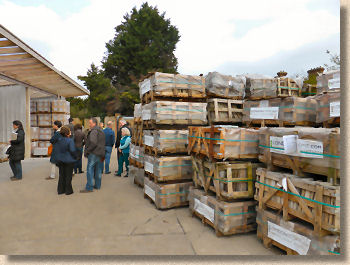 The assembled delegates were largely, it seems, drawn from the design and specification side of the landscaping trade. The buggers wouldn't stand still for long enough to enable me to count them all, but it must have been close on 50, and we were arbitrarily split into two more manageable groups for the tour around the yard, where we hollered questions and comments against the rising gale, the thrum of traffic on the M4 adjacent and the regular-as-clockwork flyover of a jumbo jet.

Luckily, some of the faces were familiar and, it seems, mine was familiar to many more, so it was a busy morning talking not just about the set-up at London Stone but answering all sorts of queries and musings on the whys and wherefores of paving in general.

The "reclaimed yorkstone flags", which we in t'north pronounce as 'rubble', raised many a question. Apparently, this sort of mill flag rejects are considered highly desirable in that London, and my comments regarding origin and history and just why they would never be used on a project in the blesséd lands north of Stoke, attracted much attention, but the mounting scorn was deftly deflected by one of the LS Lads informing us all that it was heading for the big saw which would duly slice it into allegedly usable and saleable stone – good luck with that!

Shortly after, we are all herded into various vehicles and taken to a local hostelry for what was widely acclaimed to be a fantastic goat curry with accompanying buffet. Thankfully, a cholesterol-stuffed bacon'n'cheese butty earlier that morning meant I had no room for such exotic fare, but my Bedfordshire-based dining companion helped himself to my share!

Once everyone had been fed and watered, back aboard the charabanc and off through a warren of shockingly surfaced roads through an interminable industrial estate to the saw yard, which also lies directly beneath a flight path – maybe all of south east England is similarly afflicted? There's always summat on telly about them wanting more and more runways.

No huge car park here. Indeed, hardly room to park a bike, but somehow we all alighted safely and spent a couple of hours being completely mesmerised by saws and scants, bull-nosers and banker masons.

It was an incredibly open Open Day. Many stone yards are inexplicably secretive about what stock they hold, what kit they have, what saw does what job, which stone is being processed and in what sort of quantity, but here, within health and safety reasonability, all was laid bare. Designers and specifiers could see exactly how even their wildest, most delusional fantasy landscapes could be cut from the rock of their choice and shipped to site as a large format jigsaw puzzle,

Precision cutting for intricate layouts, bull-nosed poolside copings, pencil-edged shot-textured flagstones; if you can draw it, they can cut it!

Many of the visitors went on to the showroom site, but faced with a minimum 4 hr journey back to sanity combined with an urgent need for painkillers meant I had to head off and forsake this opportunity, but I'll definitely make up for it at a later date. However, I left in a state of serious impression. There is a real sense of credibility with this company, a satisfying reassurance that they know what they are doing, that they understand the specialised market they seek to serve, and that they have the wherewithal to deliver the standard of service expected by that market.

It's refreshing to see such Open Days from suppliers outside the Big Six usual suspects. There's less sense of everything being micro-managed by an over-eager marketing department, a more relaxed and easy going feel, an air of honesty and openness that feels fresh, possibly naïve, but incredibly welcome and stimulating. I'm sure the designers and specifiers went away eager to find a suitable commission for all that lovely stone.