For some reason, the 2015 Global Stone brochure never made it this far north last winter and so there was no published review of that edition. It's surprising to find that it was omitted from last year's witterings without me even noticing, but of more concern is the 2015-shaped gap in my collection. How did I manage through last year? I know for a fact that I designed layouts using Global Stone products, so what was I using to check sizes and pack quantities? A veritable mystery!

Anyway, no such omission for 2016. The hot-off-the-press 2016 edition landed on the doormat a couple of weeks back and it's been at, or very close to, the top on my " Get This Lot Sorted " pile ever since, just so that I don't lose it!

Accordingly, I have no previous edition to use for an old-school 'compare and contrast' exercise. I can only look back at 2014's output and that, surely, is of limited value this far on. So, we'll treat is all as new and see where that takes us..... 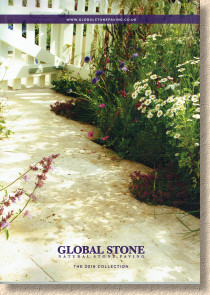 As far as I can tell, the format for 2016 continues with the same theme that's served them well for several years now. A4, portrait, full colour, 90 pages, semi-stiff cover with a pleasing silken paper (as opposed to full gloss) used inside. The silk or semi-gloss does seem to be kinder to photography than the overly-reflective glossy paper, and so the paving and hard-landscaping products look that much better.

A welcome message on the inside cover from the ever-affable MD, Julian Wood, and a contents page facing, with products grouped into either premium ranges, such as Artisan or Old Rectory, or by stone type, such as granite or slate. That all seems to make sense, but there's no indication of what's new, so I'm going to have to rely on memory and the occasional on-page flashes.

The Artisan Collection is the range of ultra-chic smooth-sawn or subtly textured sandstones, in the 560 series as wells as setts and linear/plank format.

In line with a small number of other suppliers, Global have to lose a few Brownie points for quoting flag sizes that include an imaginary joint, so the customer is effectively being sold fresh air. I know from the layouts I design on behalf of GS customers that they all-too-often assume 570mm means 570mm of stone and not 560mm with 10mm of nothing, and so they get on at me for using the wrong sizes of flagstones. Once it is all explained, this unexpected realisation is often accompanied by a sense of being diddled, of being slightly misled, even though it makes no great difference to their project.

I've said it before: who benefits by including a hypothetical joint when quoting flagstone sizes? I know it's definitely not me, because I have to explain it all to bemused and disappointed customers!

On we go, and next it's Old Rectory , a long-established range of riven and antiqued sandstone again in the 560 series, as flags, "cobbles" (Oh no they aren't! Here's why .) and walling, and what's marked up as a new coping stone, either 140mm or 280mm in width, and in two of the more popular colour options, Buff Brown and York Green. Why bother with a coping, you might be asking? Doesn't everyone use the 275mm (Oops! 285mm) standard flag? Well, maybe they do, but these pieces are 40mm thick, so that much chunkier and more of a definite coping than the 20-ish mm flags.

Coastal is a riven-and-smoothed sandstone collection launched last year, it says. I *do* recall seeing this range pre-launch and marking it up as one to watch. One of the semi-tame contractors regularly using this website reckons it's phenomenally popular with his customers and is a delight to lay. The photies he's sent me are certainly impressive, but I've not yet managed to see larger expanses 'in the flesh'. Good to see it's still selling enough to retain its place in 2016, though.

Premium is the range for all the usual suspects in imported sandstone, in practically every format, from flags to setts to circles and more. It has to be said that Global do have a knack of providing better-than-average riven sandstone, so maybe the moniker 'Premium' is justified, but, in essence this is the ever-popular, unprocessed Indian sandstone that sells so well and has done for two decades now. It's hard to go wrong (if you steer clear of the soft-as-sugar Mint flavour, that is!), and by choosing Global Stone, most of the risk has been removed before it even leaves their yard.

The Courtyard Collection is essentially clay pavers, but 2016 sees the range augmented by the addition of Altino Porphyry setts, albeit as a single, pathetically small image that is barely bigger than a swatch! The porphyry comes in 3 sizes: a 140mm gauge width and 140/210/280mm lengths, all at a meagre 25mm depth, which suggests this is the Indian porphyry rather than the more costly Italian or Argentinian stuff. I'm a HUGE fan of porphyry , it's so damned hard-wearing and resists grime, algae, mosses and lichens better than almost anything else, but the Indian stuff doesn't have the strong red and pink colouring, tending more to the muddy browns. That's not necessarily a bad thing – it's just my personal taste. I prefer the reds.

Next up is the Petrous Porcelain Collection , and some collection it is! Global are claiming it's the largest range of external grade porcelain paving in Britain, and looking at the swatch pages, I can well believe it. There has to be something there for almost every taste. With a whopping 14 new colour options for 2016, it would seem that Global really believe in the product, and by sourcing from Italy rather than the Far East, they have definitely gone for the better quality tiles.

While there is an undeniably expansive range of colour options, the sizes available offer much less choice. Most come as 600x600, although there are some colours featuring oblongs of, for example, 400x1200mm, but the on-going lack of size choice from suppliers all over the country is limiting the potential for this range of products.

Feedback from other suppliers reveal that, while porcelain/ceramic/vitreous paving has sold reasonably well, it's not breaking any records, and there is a definite regional slant to its popularity, with much more interest in the south and east, where Global just happen to be strongest, and less in the cooler, damper north and west. So, the much expanded range makes economic sense, but 21 options? Can you have too much of a good thing? That's an awful lot of stock to hold!

The Yorkstone Collection is proclaimed as new, but I'm not sure just what is new about it. Global have offered native York Stone before, so is this a new quarry? Or is it a new format, because this offer comes as 8.28m² project packs, with 5 sizes based on a 600mm gauge width (300/450/600/750/900mm) and sawn all around to a 40mm thickness. There are also matching 200x100mm setts.

This is a very attractive offer. The flags can be laid as coursed transverse broken bond or even as a random layout (takes a bit of thought but it can be done, and with none of those nasty crossed joints!) Obviously, price will dictate just how popular it proves to be, but I'm not sure what more Global could reasonably do to make it easier than ever to have a genuine yorkstone pavement for a driveway or patio.

And that's about it. Everything else is as it was, or so it seems. There's a fair representation from granite, slate, limestone, marble and I see they are persisting with the travertine despite its reputation. There's some useful discussion about how to make the best of small or large spaces, which everyone should read, because it does make you think, and then a few pages of hand-drawn layouts for the various project packs. It is noticeable that, while the drawn plans feature no crossed joints, they do keep cropping up in the promotional shots. Hopefully, it's just a matter of finding new projects without the offensive crosses marring the aesthetics. These can then be photographed and used to replace the existing imagery.

The Installation Guidance is far more extensive than most other suppliers' brochures, and it can't really be faulted in terms of text, but four pages of micro-text does not make for a riveting read. A sprinkling of cross-section drawings or installation photos could help make it a lot easier on the eye, and thereby attract more readers.

Considering the brochure as a whole, the photography is better than anything I've seen before from Global, and the spacing of these images is spot-on. Not too cramped yet not idly floating in ridiculous amounts of emptiness. If I can offer one item of constructive criticism, it would be that the lighting doesn't always do justice to the paving. A number of images seem bleached, and that's not a fair representation of the paving. Maybe some additional lighting of a more sympathetic nature, or, a trick which is increasingly common with the competition entries I've been judging over the winter, to dampen the stone an hour or so before capturing the image, would help emphasise the natural colouring.

One or two images are missing captions and so it's not always clear just what product we're looking at, and there's a desperate need for many more project photos of the new porcelains. The porcelain swatches, like those throughout the brochure, are too small, so it's impossible get a real feel for the colours and textures of the options not treated to a page- or half-page spread.

The text is not a single word more than is necessary, and the decision to avoid unnecessary superlatives is to be applauded. It achieves that all-too-rare ideal of explaining without exaggerating, providing exactly what the customer needs without wandering into the realms of fantasy or estate-agent-ese.

The supply of natural stone paving, and porcelains, is highly competitive. There are a lot of chancers out there knocking out the dregs and rubble of grubby and dusty stoneyards on the underbelly of the Indian sub-continent, so it's vitally important that the genuine quality suppliers, such as Global Stone, ensure their offers are seen to be of a superior quality, backed by a top-notch sales and after-sales support. This brochure will guarantee that Global Stone remain in the uppermost echelon of British-based natural stone paving suppliers for 2016 and far beyond.