Home / About Us / News / Resiblock Ready for Winter

With the first really bad spell of weather about to hit us, comes a timely reminder from sealant specialists, Resiblock , for their de-icing product with the intriguingly catchy name of Resiblock Pro De-Ice.

As most of us professionals know, some de-icing salts can cause all sorts of havoc with coloured concrete paving, whether it's flags, kerbs or block pavers, and some of the imported stones also seem to be prone to going a little off-colour if treated with standard de-icers whenever we get a bit of a freeze. Some folk still swear by common-or-garden table salt, but the eventual run-off can poison any adjacent garden areas for weeks, if not months, so care is required.

So, using their decades of experience in providing sealants and stabilisers of the highest quality to the paving industry, the Essex-based company is making available this fast-acting, low-risk alternative that was originally developed in Scandinavia, where they really know about proper ice-bound winters, not just the damp, miserable, chilly days we get in Britain and Ireland. 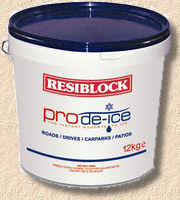 It's also claimed to leave no grubby residue, and be safe for animals, so pets can use the treated surfaces with impunity.

It should be available at your local Builders' Merchant, but you can also buy online via the Resiblock website .

Maybe you don't need it right now, but you know that, at some point over the next couple or three months, either you or one of your customers is going to need a pathway or driveway rendered ice-free and safe to use. Play smart and get a pail or two in stock now, so you're ready for whatever the weather throws at us this winter!