Can fuel-damaged bitmac (tarmacadam) be fixed? Why does fuel cause so much damage? This FAQ addresses these questions.

Overnight fuel leaked from my car, this has resulted in my tarmac drive being dissolved - it has left a couple of holes 5" wide. How can I patch these unsightly holes? 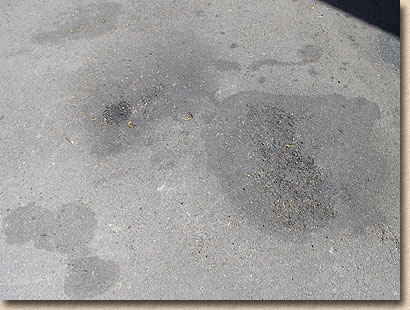 Tarmacadam is an oil-based product; the binder is a heavy tar or bitumen and as such, it can be 'thinned' by the addition of a lighter oil, such as paraffin, petrol or even turpentine.

Many automotive oils, such as petrol, diesel or even brake fluid, can 'dissolve' the binder of a tarmacadam and there's no way of 're-sticking' the aggregate back together. Further, the contaminating oil will seep and spread, degrading all the tarmac that it contacts. Given a few days, a petrol leak will 'eat' its way through a 75mm thick tarmac driveway; a screwdriver or stiletto heel will easily penetrate the previously 'set' surfacing and before long, the now unbound aggregate will begin to be scattered everywhere. And once a hole appears in a tarmacadam surface, it just gets bigger and bigger as the edges 'crumble'.

The best remedy is to cut out the affected area to at least 100mm back from the contamination. A power saw , floor saw, angle grinder or even a hammer and bolster can be used to cut out the surface in a neat and tidy fashion, preferably a rectangle or octagon. The contaminated surfacing must be dug out, and the surrounding material excavated back to the cut line. All the spoil should be disposed off site, in a skip or a bin.

Most Builders' Merchants stock 25kg bags of repair macadam , often sold under an appalling name such as 'Mac-in-a-sack' or 'Quick-Mak'. They may also sell a product known as 'Cold Pour Jointing Compound' which is used to seal the edges. For a typical residential driveway with a 75mm thick surfacing of tarmac, each 25kg bag of repair macadam will cover approximately 0.15m² which is the equivalent of an area measuring roughly 400mm × 400mm.

The vertical edges of the hole should be primed with the Cold Pour, which may be poured on from a can or tar bucket, or 'painted' on with a brush. The hole should then be filled to about ¾ depth with the repair macadam and compacted down with a vibrating plate, small roller, a punnel or a lump hammer. A second layer should be placed immediately and again compacted so that the new surface is flush level with the remaining original surfacing.

Once the hole has been filled, the joint between the repair and the existing surfacing should be sealed with more Cold Pour, capping the joint and thereby preventing water ingress. Note the comments above about how these repair macadams can remain 'sticky' for a number of weeks. Cold pour is a water-based emulsion and care must be taken to avoid tracking it everywhere.

Note that Cold Pour is a jointing compound NOT a repair mastic. It should NOT be poured over fuel-contaminated tarmacadam in the hope of replacing the original binder and 're-setting' the aggregates. It is nasty, tacky stuff and if put it down in large areas, it will get tracked everywhere, by tyres and footwear, especially if there are light-coloured carpets in the vicinity!

An alternative strategy would be to ask a specialist surfacing contractor to undertake the repairs.

Many macadam contractor are reluctant to undertake small scale repairs: the logistics in organising plant, labour and materials can be prohibitively expensive and so the contractors know that providing a quote of several hundred quid to fix a few small potholes is unlikely to win them the work. Just visting the site and providing a quote is likely to be viewed as a fruitless exercise and a waste of time. However, there are some contractoprs who are willing to undertake such tasks, but, as mentioned, it's unlikely to be cheap.

A more likely scenario is to wait until there are repair works or new surfacing taking place locally. With the plant, labour and materials to hand, a contractor is more likely to be interested in making a few quid extra by fixing small potholes and surface damage during their lunch hour, or after finishing the main work, especially if they are to be paid in beer vouchers!

A repair undertaken by a contractor using hot macadam and compacted with professional equipment is more likely to provide a sound and lasting repair than DIY patching with a cold repair macadam. Bear this in mind when deciding whether to DIY or use a contractor

There is a pavingexpert video showing patching being undertaken on a local estate road which shows the basic principles involved.

As with other monolithic surfacings , tarmacadam cannot be 'invisibly repaired'. The patch will always look like what it is: a patch. The same applies with concrete (even the very expensive Pattern Imprinted Concrete ), Resin Bonded Aggregates , Imprinted Asphalt and all other monolithic surfaces; something to bear in mind when considering specifying one of these surfacings for any project.

Although the patch will eventually become less noticeable as it 'blends in' with the rest of the pavement thanks to the effects of time and weathering, for the first few weeks, it will stand out like a black cat on a ski slope. Part of this is due to the fact that the materials differ somewhat in colour and texture, and part is due to the fact that the viewer is aware of its presence. After a couple of months, regular users of the patched pavement will no longer notice the existence of the repair, although it will still be there if you look for it. 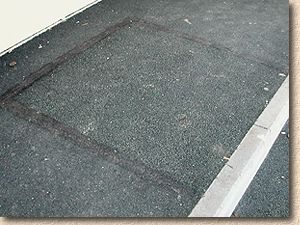