I swore I wouldn't come here again. After the anti-climax that was last year's Civils 06 event (I was going to say "bash", but it was, at most, a light tap or a half-hearted tickle) I vowed that I wouldn't be fooled into splashing out for train fare and an overnight hotel, so why am I here? Did I forget how unfulfilling it was 12 months ago? Have my marbles finally rolled away well beyond reach or were my comments on this website mere rhetoric?

The truth is that I was cajoled into being here, enticed with the promise of new products that, they said, I really couldn't afford to miss along with an alleged "big effort" by one exhibitor in particular. Reluctantly, I decided to give it one more chance, but I would do it as a "there-and-back" in one day, with no overnight hotel to break the journey that would give my aching back and cardiac muscles a chance to recuperate. Until you are disabled, you never realise how body-achingly tiring a simple train journey can be, and when you factor in the challenge of using the network of comedy sewer pipes with integral trains that them Londoners refer to as "The Tube", a "there-and-back-inna-day" is a major undertaking.

A new venue this year: the spin being promulgated by the organisers is that the event has outgrown the over-sized ramshackle garden shed known as “Olympia”, yet 2007's function barely fills Earls Court 2, and the venue managers have erected hoardings to keep those exhibitors brave enough to show their faces herded together at one end of the cavernous hall. It isn't fooling anyone, though. 11am when I arrive and there's a scuffle amongst the blazered badge-scanners for the right to process my entrance.

I poke around a couple of exhibits before deciding to grab a pew for one of the free seminars. There are two of the free seminar “theatres” this year, plus the paid-for big-wig conference arena, and it's gratifying to see that the red theatre is three-quarters full with disciples eager, like me, to learn what's new in the fascinating world of geogrids. Over the next 45 minutes, Tensar's Cliff Hall did a fairly good job of informing his audience (which grew as the event progressed) without once tempting them to just close their eyes for a few seconds, as is often the case with these events. I came away feeling I had been updated on the latest thinking and had a good understanding of why the tri-axial format was preferable to the more usual bi-axial offering. (If you desperately want to know, email Tensar and ask them to explain: alternatively, just take my word for it!)

Tensar and their highly desirable tri-axial geo-grids were one of the lamentably few products on show. As in previous years, the ratio of posing to practicality was worryingly high, but it seems that by moving the event back in the calendar by a couple of weeks may have done away with a sizable portion of the free-loading schmoozers who had previously used the event as a pretext to do their central London Christmas shopping on the company's time. 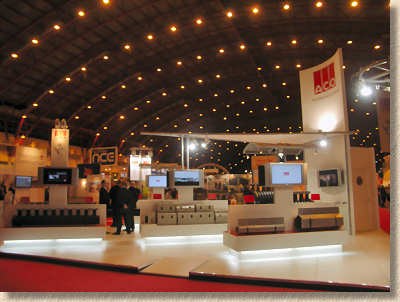 There are still plenty of consultants and outsourcing-specialists, but the number of mapping and IT suppliers is down, and some of the names that are familiar from previous years are noticeable by their absence. Of the product suppliers that did make the effort, Aco , Charcon and Formpave would be recognised by many in this trade and all three staged stands that were drawing in the numbers but there were a few smaller, less well-known names that deserve a mention.

In view of the forthcoming changes to HSE advice on the cutting of concrete paving units, plastic kerbs will never have a better chance to grab market share, so the range offered by Envirokerb was attracting a fair bit of attention. I had a good discussion with director Clifford Maylor and shared my pretty valueless opinion that plastic alternatives for HB2s and other standard fare are never going to supplant the concrete beasts, but there is more potential for the combined kerb-drains and the shallow bridge drains. At only 14kg, I would have been delighted to lay these in preference to the 50kg heavier concrete kerbs that are at least partly responsible for my knackered spine, but while the cycle time for laying lightweight plastic or machine-assisted concrete units remains more or less the same, the significant price differential will ensure that concrete maintains its domination of the market. That's not to say there's no place for plastic kerbs in the market: they are a very useful alternative, particularly for small repairs, retro-fitting of dropped crossings, and environmental projects looking to use recycled materials, but, if I were a concrete kerb manufacturer, I wouldn't be losing any sleep just yet.

An alternative take on the weighty problem of kerb installation comes from Scan Kerb who provide a shallow, surface-mounted kerb that's bonded to an existing carriageway or other suitable substrate to create a quick and easy solution to the installation of traffic islands, cycle lanes and for projects where a restricted-depth kerb is required, such as bridge decks. Like the plastic kerbs, this is a product for special applications. It's not going to usurp the dominant market share held by traditional concrete kerbs, but, given the right type of project, the Scan Kerb can offer a viable alternative.

Right next door to Envirokerb were the guys from Road Technics with their “Ready Raise®” product targeted at making life easier for those involved with highway ironwork. Basically, it comprises a series of raising pieces that are placed inside a concrete collar, with the whole lot glued together using a resin-based mortar that sets in just 30 minutes and enables permanent reinstatement of access covers and gully gratings that can be trafficked in under an hour. This is a burgeoning market: modern roads can't afford to be closed for any longer than is absolutely necessary, so any system that can get the traffic moving again in less time is certain to be of interest to highways departments up and down the land.

Prismo have been serving the highways sector for as long as I can remember and they have survived by providing a small but exquisite range of invaluable products. Probably best known for their roadmarking equipment, they also offer products as diverse as resin bonded surfacing, speed bumps, grit bins and verge marker posts. I first saw the RePhalt repair macadam being demonstrated a few years back and was intrigued by its water activation and solid performance. It's good to see that it's now the repair macadam of choice for nearly 50 local authorities. The Streetprint asphalt imprinting system remains an attractive option for decorative surfacing, particularly for traffic calming schemes. 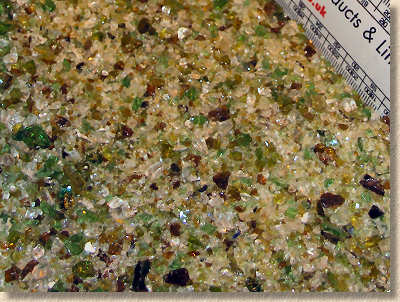 Day's Aggregates are a well-known name in the south-east of England but remain largely unknown elsewhere. I'm not exactly sure what an aggregate supplier hoped to achieve from exhibiting at an event such as this, but I'm awfully glad they did, because they had what was, for me, the most interesting product at the show: a paving sand, compliant with Table D3 of BS7533:3, that's made from recycled glass. You could almost predict that it would be called Eco-Sand. They also have a choice of “eco” Type 1 materials, using blended aggregates, with one based on crushed concrete and the other incorporating some chunks of chewed-up bitmac. Can you guess the name?

After the soggy summer we've had, I did think we'd have seen more of a mention for all things SUDS at this event, but the only company really pushing the message (other than Formpave's marvellous permeable pavement cross-section model) were Althon who had managed to put together a cogent and highly illustrative model using real components, and were brave enough to incorporate products from other manufacturers to ensure the whole story was told from surface to storm crate, via linear channels, flow attenuators, catch pits and oil traps.

CPM is well known for manufacturing all sorts of concrete drainage products, notably pipes and chamber sections, and it'd be easy to think there couldn't possibly be owt new in concrete manhole sections, but you'd be wrong. Civils 07 saw the unveiling of a brand-spanking new bespoke pre-cast chamber base, with integral inlets positioned to the customer's requirements, an outlet, and impeccable benching that you could eat your dinner off. No more effing about with chamber rings balanced on bricks; no more struggling to get rocker pipes properly aligned; no more terrifying the apprentices with tales of throat-biting giant rats just before you send them into the chamber to complete the benching. They've taken all the fun out of manhole construction!

For the opposite end of the chamber, Peter Savage Ltd had a full selection of manhole covers, including an intriguing three-section lid that addresses all manual handling concerns and a very clever sectional tree grille that can be filled with the 100mm wide pavers of your choice to blend seamlessly with a streetscape design.

It's tempting to think that all ironwork is the same, given that it all has to comply with Highways Standards, and so cost should be the only consideration. However, there's a good deal of innovation around at the moment (see the next paragraph), and you can see quite a lot of that innovation with this one supplier. The tree grille shown here (apols for crap image - if anyone from PS can let me have a better version, I'll gladly replace it) is just one of several items that caught my eye, and when ironwork starts grabbing your eye, it's either a damned decent bit of iron, or it's a bloody boring show!

There seems to be a different merchant group exhibiting each year, and the roulette wheel stopped at BuildBase for this year's event. As with previous merchants, the strategy is to display “interesting” products that should appeal to the civils market, and with the relatively new BuildBase Civils looking to establish its heavyside credentials, they chose to feature geo-textiles, cell matrix, Suds stuff and a clever access cover/gully grating system that allows highway ironwork to be raised without breaking out in preparation for final site surfacing. Basically, the unit is fixed at the lower setting prior to base/binder course surfacing of new carriageways. Then, when the surface course is ready to be laid, the cover or grating is lifted out, a set of locking pins fitted, and the cover/grating replaced at a what is now a raised level to suit the new surface level. Manufactured by Wrekin and priced somewhat lower than you might expect, the “Eleveta®” range looks very promising.

Civils is still some way short of the show it ought to be. There's not a wide enough range of products and there's too much of the same thing. The big corporate consultancies are still taking up valuable floor space and I don't know why, but there did seem to be less schmoozing than in previous years. If only they could attract more of the practical civil engineering contractors, there'd be hope for the future. To be fair, I have to admit, albeit in a grudging manner, that this year's effort was a significant improvement on last year, but then, that's not much of an achievement as watching concrete set would have been a more valuable use of my time when compared to the 2006 snorefest. I might even be back for Civils08!