Gun-injection of jointing mortars may seem like a simple task, but it requires specially modified mortars and, of course, a specialist tool in the form of the gun. Just how does it work, and how well?

At first glance, using a glorified mastic gun to force mortar neatly and directly into a paving joint makes a lot of sense and hundreds of contractors, DIYers and inventors claim to have come up with the idea over the years. While the theory is fine, the problem has always been the mortar, which can be somewhat reluctant at being squeezed through a relatively narrow nozzle and has the unfortunate habit of separating into heavier, denser sands and lighter cement particles, particularly if subjected to the type of mild vibration inherent with a motorised pump system for any length of time.

The key to keeping the mortar fluid and 'pumpable' lies in using the correct type and quantity of plasticisers. These along with other "secret ingredients" are what differentiates the really good gun injection mortars, such as Easipoint , from plain old sand and cement, and make the whole concept workable.

This question comes up with tedious regularity. Which is best: a slurry or a gun-injected system? Personally, I don't think there is a definitive answer, as both delivery systems have their pros and cons. There's no doubt that the actual mortars used with whichever system are more than adequate and it's difficult to say that one particular mortar is better than any other. So, it comes down to the delivery system, and the most appropriate will be determined by a number of factors, not least of which is personal preference of the contractor.

However, the type of paving will also influence the decision. A heavily riven or textured surface can render slurry sealing inappropriate as the deeper recesses of the pavement surface can be difficult to clean effectively, while being hunched over a cartridge gun or injection nozzle for hours on end while steadily filling the hundreds of joints in an area of sett paving might just be asking too much of the operatives. Consequently, it's always a good idea to undertake a trial area prior to making a final decision.

In terms of speed, there's little to choose between the two on flag pavements, but slurry is usually quicker when small setts or cubes are involved.

If meticulous care is not exercised, it's very easy for a slurry system to stain, and possibly ruin, expensive paving, requiring extensive and costly chemical cleaning to salvage the stone.

One criticism levelled at gun-injected mortars is that careless or poorly trained operatives can create 'ribboning' of the mortar which creates voids within the joint and thereby weakens the overall structure. This can be countered by proper training and/or monitoring and/or encouraging the operatives to 'strike' the filled joints which forces the mortar fully into the joint and tends to reveal the accidental existence of any voids that can then be 'topped-up'.

There are two methods of delivery: manual and mechanical.

The manual version relies on the mortar being mixed in a bucket or other suitable container before being loaded into an empty 'cartridge' with the aid of a trowel. The cartridge is then fitted into the gun-frame and pumped through to the nozzle by squeezing the trigger that gradually drives the plunger deeper into the freshly-filled cartridge, extruding the mortar in the process.

The joints are filled to surcharge, but care is taken to prevent excess mortar staining the joint edges. The mortar has a relatively rapid initial set, and so it stiffens quite quckly, allowing the joints to be 'struck' with a pointing bar. The surplus mortar is removed and disposed: it cannot be re-used.

The mechanical version is a specialist tool used on larger projects by skilled operatives. It relies on a suitable mixed mortar being placed into a hopper from where it is forced along the delivery pipe to the injection nozzle by means of a small electrically driven pump.

While this is a quick and effective jointing method, there is a very limited pool of suitably experienced contractors (and an even smaller pool of machines!) which make this method somewhat rare. 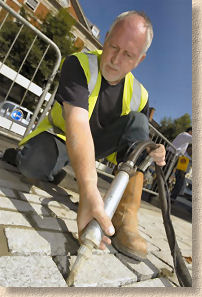 Gun injection seems a simple solution but it actually demands a slightly higher skill level than slurry/grout jointing. It has a very low level of waste, which assists the economics of its use, but it can be labour-intensive when used with smaller paving elements such as cubes and setts.

Gun injection offers a straightforward and effective method for jointing any sized area of paving, from patios and driveways to city centre pedestrianistion and commercial schemes. Despite better understanding and implementation of slurry grouts, gun-injection will retain a core of users for whom the simplicity of gun injection remains preferable to all the rigmarole involved with slurries and grouts.

Thanks to Easipoint for providing most of the photos used on this page.