OK - the last page. It's taken almost as long to compile this review as it did to trudge around the cavernous halls of the NEC!

This last page looks at the decorative aggregates and other sundry products linked to the hard-landscaping industry.

First up in this final section is our old friend Simeon Osen and his resin bonded surfacing system for driveways, DecorDrive . Simeon's a regular contributor to The Brew Cabin message board part of the website and his talent for combining wit and diplomacy are appreciated by many of the Brew Cabin Irregulars.

Decor Drive grew out of the Ronacrete Fast Grip products and was launched earlier this year to meet a demand from the residential driveway market for a simple, cost-effective re-surfacing product for tired but structurally sound drives, patios and forecourts. The actual products are described in some detail elsewhere on this website , so I won't over-elaborate here. The DecorDrive stand was always busy and at one point I even ended up answering questions for them as they were inundated with enquiries. The product itself seems to have hit the right note with householders, contractors and garden centres alike.

Simeon told me, "We are seeking installers to become licensed in an exclusive territory and we have vacancies across the UK. Installers benefit from our national marketing campaign which will generate leads and enquiries for surveys, which have a high conversion rate to orders. Also installers benefit from marketing of the brand in their territory which they part finance again with all leads coming to them.

The product will shortly be shown on Sky television with 32 shows of a 15 minute programme running from October to January.

Installers are typically landscaping contractors, tarmac and asphaly specialists, resin installers, all looking for an add-on to their existing activities."

Aco are, possibly, one of the best-known names in the drainage business and they used their display area at Glee to show off just a small part of their product range.

The drainage channels were extremely popular, and are something that the site will be looking at in more detail in the coming weeks. Product Manager, Joe Bordas, was particularly taken with the interest in the threshold drain systems, a linear channel that facilitates level access for doorways in compliance with the Disability Discrimination Act. They were showing a couple of different versions, "StepDrain", a nice all-stainless slim one, and "DoorWay Drain", a plastic-channel version with a stainless two-piece grating.

More and more new properties will have this type of threshold solution fitted as standard in years to come, and the Aco model has to be the most visually attractive to date. 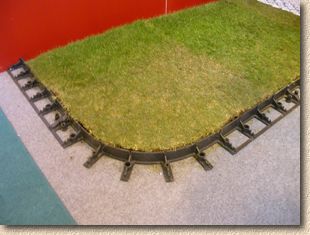 The Borderguard system of edge restraint was originally developed for use as a restraining edge for block paved areas but in the picture opposite we can see it being put to good use as a lawn edging. This type of product is considered in more depth on the alternative edgings page. I'm not sure how much of a market there is for these systems in the UK, but Joe reports a high level of interest, particularly from Garden Centres keen to offer a simple and attractive alternative to their customers.

Aco also showed their Groundguard cell system that can be used to reinforce turf or as a containment medium for loose gravel. This idea has really taken off over the last 18 months or so and now we see these cell matrix systems being offered by a dozen or more companies, proof that it never takes long for a good idea to catch on!

There has been massive interest in imported stone over the last 5 years or so, and some in the industry think that it's been oversold or that's its time in the limelight will shortly come to an end. The fact that every Garden Centre and every Builders' Merchant in the land now seems to be selling the stuff may have undermined the previous perception of exclusivity, and maybe the doom-mongers are right in predicting that it can't be too long before the sandstone in particular comes to be regarded as passé by the cognoscenti and style fascists.

However, demand is still high, so high in fact that during this last summer there have been real problems meeting demand, so perhaps the rumours of its demise have been over-exaggerated. Certainly the two biggest exhibitors of natural stone at this show believe there is life in the market yet. They're being careful and ensuring they offer their extensive client bases a wide variety of products, and not just the Indian sandstones. We're seeing new types of stone and a willingness to explore possibilities with non-stone materials, such as these gorgeous frost-proof clay tiles from Midland Slate & Tile . 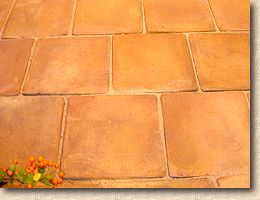 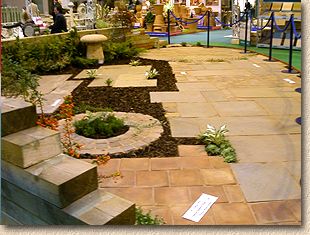 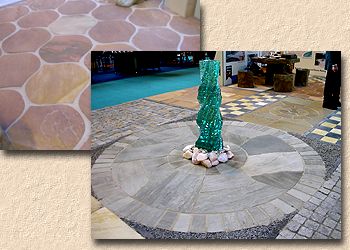 Global Stone had two display areas, having jumped in to take over the space abandoned by Brett at the last minute, and they certainly had the widest range of stone pavings at the show. They still had the stock-in-trade of the Indian sandstone, but in a variety of new formats such as the Spanish tile shape and the wavy-edged circle features shown opposite.

Maybe the future for the Indian sandstone lies with these 'premium' features and less so with the standard rectangular flags, but Global Stone have also identified that they need to have Travertines and Marbles and Granites and Basalts and a whole lot more if they are to truly offer the consumer a World of Stone.

Before leaving the realm of natural stone, I must mention a new jointing compound for wide joints that I spotted on the Ransford's Building Supplies stand.

What to use for jointing setts and other pavings with wide-ish joints is one of the perennial FAQs on this website, and the products that have been generally available up to now, mentioning no names, have not been terribly good. Ransford's have a business based in Daventry where they deal in traditional and reclaimed landscaping and building materials, and in the course of that business, they've linked up with a German manufacture to bring us the attractively titled 'Rompox' wide jointing material.

Basically, it's granite sand, available in 7 different colours, that is combined with a binder that does its magic when exposed to the air, curing to form a hard, permanent and, I have to say, attractive looking joint with no risk of staining the setts themselves. 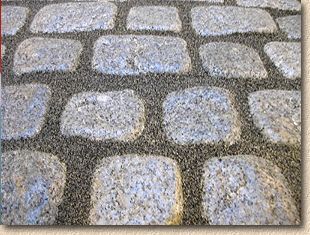 I have a lot of technical literature and a video to look at when I get the chance, so I'm not yet sure of all the detail, but if it really is as good as it looks, I'll be mentioning it again on the website, that's for sure.

Moving on to decorative aggregates, there is, as I mentioned earlier, an eternal problem in how best to display loose aggregates at a show such as this. However, many of the 'names' in the industry can't afford to forego a marketing opportunity as valuable as Glee, and so they turn up and do their best to get across with their message.

Derbyshire Aggregates had a stylish display with a waterfall built using Penrhyn slate. 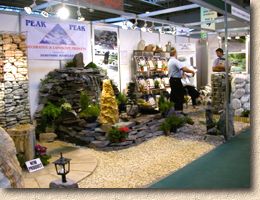 Last, but certainly not least, here's the display from Hanson's SupaMix imprint. I've never understood why dyslexic spelling is seen as a valid sales tactic, which may be why I'm not in marketing, but SupaMix have a nice little business selling bagged aggregates and various cement-based pre-packs for fixing flags, fence-posts and the like.

As with the others of this ilk, they're not the easiest products in the world to display, but at least the stand itself was attractive and they had a nice-looking pinky, glittery rock that they told me is called Norwegian Pink .... funny, I could swear I've seen that somewhere before! 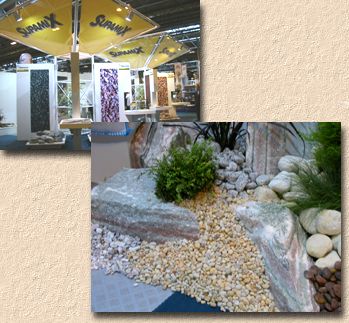