Imagine you're at work and one of your co-employees comes in to announce that he* wants to smash a car into a roadside barrier, video it all, and he wants the company to pay. Do you have Security come to collect said employee and take them for a chat with a very nice "counsellor" on a very comfy couch, preferably somewhere off-site and with high fencing if at all possible, or do you invite him to sit down and tell you more? Tough call!!

[* Of course it's a bloke! What sort of woman would ever dream up such testosterone-fuelled silliness?]

But this is the predicament faced by Brett Paving earlier this summer when the sales team wanted to prove, beyond any doubt, that the celebrated Trief kerb is as safe as they've been telling clients for the past 50 years.

Trief kerb is commonly used to deal with a number of problems on the road network, including the segregation of traffic in mixed-use areas, the development of traffic calming systems, the creation of pedestrian refuges, and for the provision of added protection for toll booths. You've probably seen them dozens of times and not even known what they were, other than being "Big Funny-shaped Kerbs".

Anyway, it wasn't just idle curiosity and the desire to smash-up-a-banger which promoted this odd request up at Brett HQ. Back in 2010, and you can be forgiven for missing this momentous event, BS EN 1317 Standard for Road Restraint Systems was introduced. 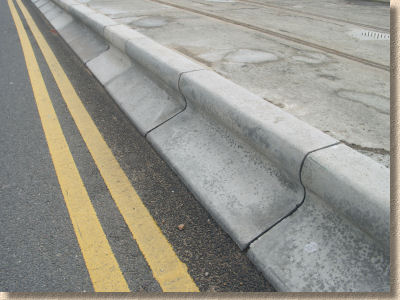 This standard provides test criteria for various types of "containment", as it is known, on the highways of Europe in general and Britain in particular. Containment is defined as structures intended to prevent vehicles leaving the carriageway, and while we are thinking about kerbs primarily, it also applies to things such as the familiar Armco as well as the Death Wires used to separate carriageways by transport authorities who haven't heard the horror stories regarding decapitated bikers.

There are various levels of "Containment". Obviously, the structures necessary to 'contain' a full-laden HGV needed to be a little more substantial for those intended to 'contain' a Nissan Micra or one of them SmartArse cars which look like a washing machine on wheels.

Anyway, after discussion with the Transport Research Laboratory (TRL) and various so-called "experts", it was decided that for the Trief kerb, the testing should cover "normal containment" known as N1. This involves sending a 1500kg car directly into a line of the kerbs at a speed of 80kmh with an angle of impact of 20°. If you want to know all the gore-less details, more info can be found in the insomnia-curing test methodology known as TB31.

So, a fairly lengthy line of the Brett Trief GST2A containment kerb system was independently installed at the TRL facility at Crowthorne in Berkshire, the scientists and engineers selected a suitable car, and literally launched it at the kerbline once the backing concrete had gone off. It's important to note that Brett have buggerall input in this testing, other than handing over a wagon load of Trief kerbs and a big handful of dosh. The installation, the site, the car, the launch and the results are all managed by TRL. A select band of Brettsters were allowed to watch from a safe distance – if you'd paid umpteen thousand quid for this nonsense, you'd want to see the 'money shot', wouldn't you! – but everything else was down to TRL and no-one else. 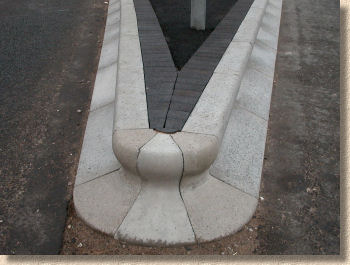 Anyway, after smashing up the car, video of which can be seen below, the conclusion of TRL is that the test clearly showed that the Trief GST2A kerb held firm and redirected the vehicle onto the road. There are three ratings available cleverly labelled A, B and C, and blow me if Trief didn't receive a top-of-the-class A, proving that it can withstand severe impacts with no deformations or intrusions into the passenger compartment of the vehicle. Equally important was that none of the vehicle's wheels passed over the kerb line which means that any infrastructure, or pedestrians unlucky enough to be in the vicinity, would also have been fully protected.

"Trief has now been in service and protecting road-users and infrastructure for half a century. This testing is further proof that it is still the most cost-effective re-directional kerb system available on the market.

Protecting the safety of drivers and pedestrians, as well as buildings and street furniture, is the primary focus of a containment kerb so it is exceedingly pleasing to see that independent experts have concluded that Trief meets their high standards. Brett Landscaping prides itself on the durable, high-quality attributes of its commercial landscaping products, of which Trief is just one example.

More importantly, we believe that specifiers should insist on products meeting these important standards to ensure that our highways remain as safe as possible; 'or similar approved' is just too much of a gamble to take when lives are at stake. We hope that the mandatory introduction of CE marking for construction products will significantly help in this respect."

To sum up the gist of all this, the Trief GST2A kerb was tested by the Transport Research Laboratory against BS EN 1317 (N1) Road Restraint Systems and proven to pass. The test consisted of a 1,500kg passenger vehicle hitting the kerb at a speed of 80kmh and at an angle of 20°. In order to pass the test, the vehicle must be safely redirected to protect pedestrians and other roads users.

The diagram below illustrates the test: