Page 3 of the gallery of DIY block paving jobs

Peter Hinde is the genius behind this project and he told us...

"I completed a circular feature made of blocks earlier this year in a shady part of the garden. The blocks had been left over by the contractor who did the drive. I do wish I'd discovered your site before they did the drive, I would've pulled them up on one or two things - cutting and jointing in particular. I wasn't sure what I was going to do with them, until I discovered your website." 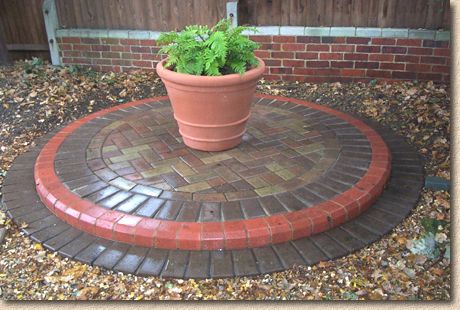 "Trouble is, when I was doing it I kept referring to it as a stone circle, so people expect to see Avebury when they come to admire!! A friend did say I was being ambitious with a circle - "all that cutting" - but with the right tools, and a bit of practice, oh, and a lot of hints from your website, I would not have even attempted such a project. The pile of blocks left over from the drive would still be a pile of blocks!"

Another of Peter's projects, a stunning yorkstone patio, is featured in the Flag/Slab DIY Gallery elsewhere on this website.

Martin Redican from Ireland sent in the following....

"Here are some photos of my patio which you and and your website helped me construct. I was in contact with you last year and you said to send photos, and now that I've accessed a digital cam, here they are. " 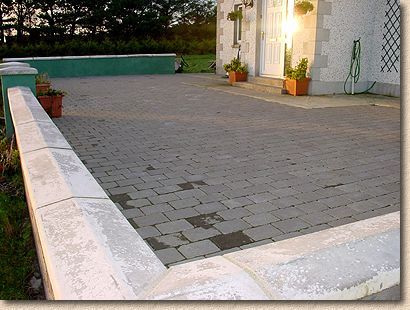 "As you can see, I have a concrete foothpath around the house which I put in the year before otherwise I would have brought the blocks upto the house.

I had to block the walls around the patio and move a lot of hardcore in to raise the level, which took a long time - laying of the blocks was the easy part!" 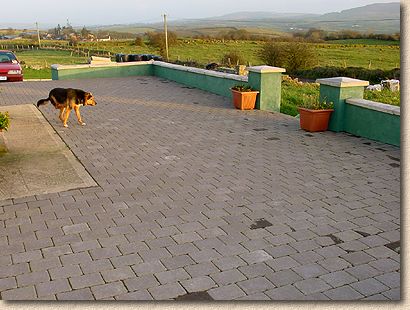 "I put two gulleys in for drainage of the hosepipe and downpipe but the main drainage flows out through the two front piers from anywhere on the patio. This took a lot of consideration in laying out the falls for drainage but it has worked very well with no pooling of water. However, on a really wet day it's like Niagara Falls at the two piers!" 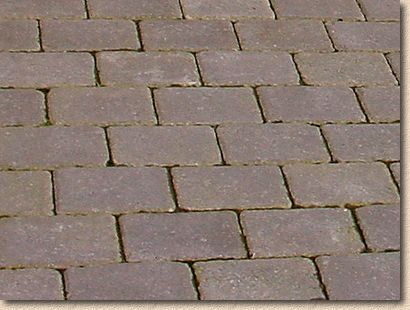 "I used Acheson-Glover Country Cobble and am happy enough with them. They look purple when they're dry but look even better when wet, and seeing that I live on the west coast of Ireland, that is a regular occurence."
(Note: Acheson-Glover products are available throughout Ireland. The Country Cobble is a range of 60/80mm thick tumbled pavers manufactured in a range of 6 standard colours [Bracken, Brindle, Turf, Slate, Silver and Burren] and 3 standard sizes [200x150, 150x150 and 100x150mm].)

"As you can see I've still a lot of work to do around the place, but I hope to have a bit more done this year.

Other DIY block paving projects featured on this site....

Want to add your pictures to these pages? Send your jpegs and a description of the fun you had to Tony at the usual address... info @ pavingexpert.com